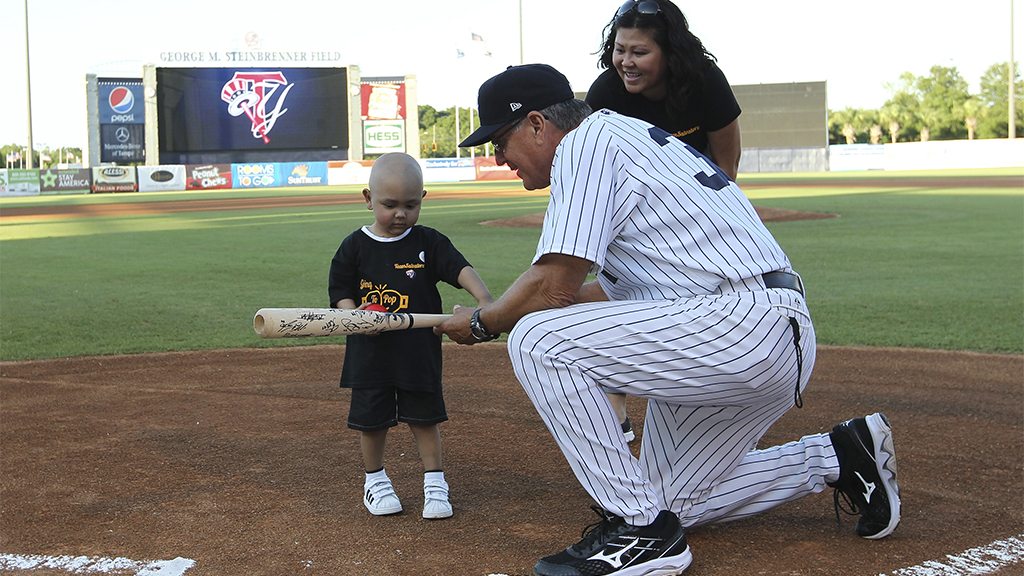 Tampa, Fla. – The Tampa Yankees are proud to announce that, together with the outstanding people of Tampa and our partners, we were able to raise over $15,000 for Team Salvatore.

Donations poured in from local businesses and individuals on Friday, May 1st when the Tampa Yankees hosted Team Salvatore, Fight Like A Kid Night. Over 2,000 fans came out to Steinbrenner Field and all ticket proceeds went to help aid in Salvatore’s medical expenses.

Salvatore is three years old and has been diagnosed with Stage 4 Cancer. His family has had to rearrange their lives to make sure that he gets all the care he needs and that often means staying overnight at the hospital. Salvatore has said that he wants to be a fire fighter when he grows up and so Tampa Fire Rescue’s Engine 8 picked up Salvatore at St. Joseph’s Children’s Hospital to drive him to the game. The Fire Truck drove him into the outfield where he then got a ride in a Convertible Mustang courtesy of Bill Currie Ford. Salvatore and his family waved to fans as they made their way around the warning track of the field to the Tampa Yankees dugout where the players were waiting to meet him.

Tampa Yankees Manager, Dave Bialas presented Salvatore with a team autographed bat and he got to throw out the ceremonial first pitch.  The T-Yanks want to thank everyone who either made a donation or came out to the May 1st game to support Team Salvatore. Photo’s from the event can be viewed on www.tybaseball.com.

Salvatore’s battle with cancer is far from over.  Donations can still be made online at http://www.gofundme.com/ligi3k.

The Tampa Yankees are the Single-A Advanced affiliate of the New York Yankees.  For more information call (813) 673-3055 or visit www.tybaseball.com.