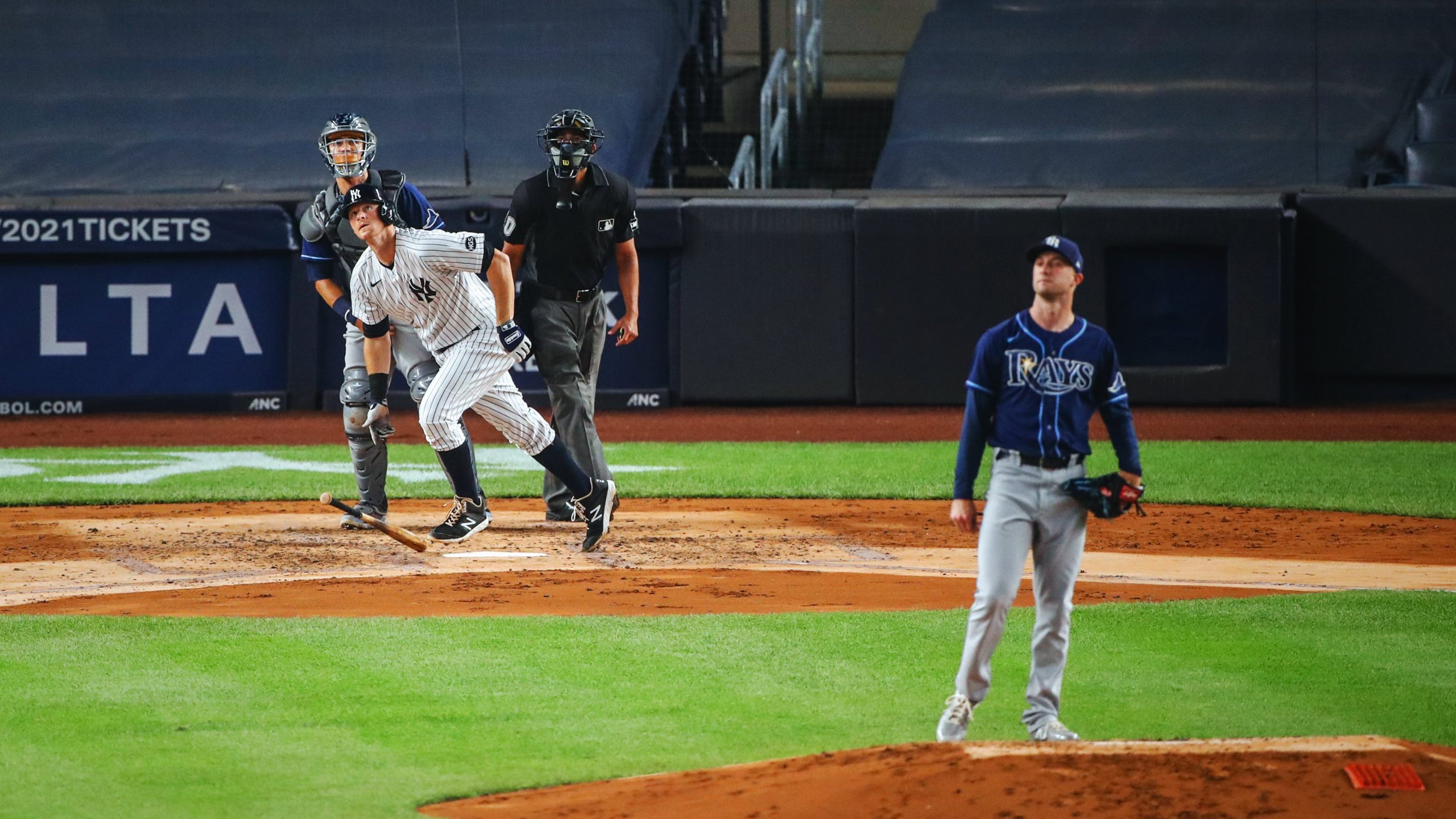 DJ LeMahieu sent two out of the park tonight as the New York Yankees defeated the Tampa Bay Rays 5-3 at Yankee Stadium. It was a contentious night as tensions rose at the end of the game and benches cleared following a pitch Aroldis Chapman threw to the last batter of the night. Nonetheless, the Yankees were able to come away victorious, defeating the Tampa Bay Rays 5-3. Masahiro Tanaka (1-1) took the win for the Yankees, Thompson (1-2) was credited with the loss for the Rays, and Aroldis Chapman was credited with his first save of the season.

The fireworks started in the bottom of the first inning with a solo home run by DJ LeMahieu (3) to left field off of Trevor Richards to give the Yankees an early 1-0 lead over the Rays.

In the bottom of the third inning, it was DJ LeMahieu with another solo home run (4) to right center off of Trevor Richards to extend the Yankees’ lead over the Rays to 2-0.

In the top of the fifth inning, Kevin Kiermaier put the Rays on the board and tied the game with a two-run home run (3) on a line drive over the right field wall off of Masahiro Tanaka that scored Willy Adames to tie the game at two a piece (2-2).

That’s where the scoring would end as the Yankees would go on to defeat the Rays 5-3 at Yankee Stadium.

As mentioned above, tensions were high in tonight’s matchup between the Rays and Yankees as benches cleared following the last pitch of the game in retaliation to a pitch thrown by Aroldis Chapman at the end of the game. Zach Britton spoke with the media following the game, stating that he did not believe the pitch thrown by Chapman was intentional. Britton stating that due to not being able to have as much of a buildup, Chapman is still rusty and working through the kinks. Britton stating, he hopes that nothing more transpires in tomorrow’s series finale between the two clubs. Britton stating that both teams are battling to win the division and want to win the division. “I think it’s just emotions fly high sometimes in close games like this. And it’s not the first time between us,” stated Britton.

Gio Urshela also spoke on tonight’s incidents, stating that he does not believe there will be carryover as both teams are trying to win the division. Urshela stating he believes they will play the game the right way.

DJ LeMahieu also spoke on the situation that ensued, stating, “It is what it is. It sounds like they’re going to throw at us tomorrow. We’ll be ready.” LeMahieu stating that the comments made by Rays Manager, Kevin Cash circulated through the clubhouse pretty quickly.

Aroldis Chapman was not available for comment following tonight’s game.

The Rays and Yankees will finish their series tomorrow night at 7:05 PM at Yankee Stadium. Tensions and emotions are expected to be high. Following tomorrow night’s game.