The Enigma that is Mason Williams 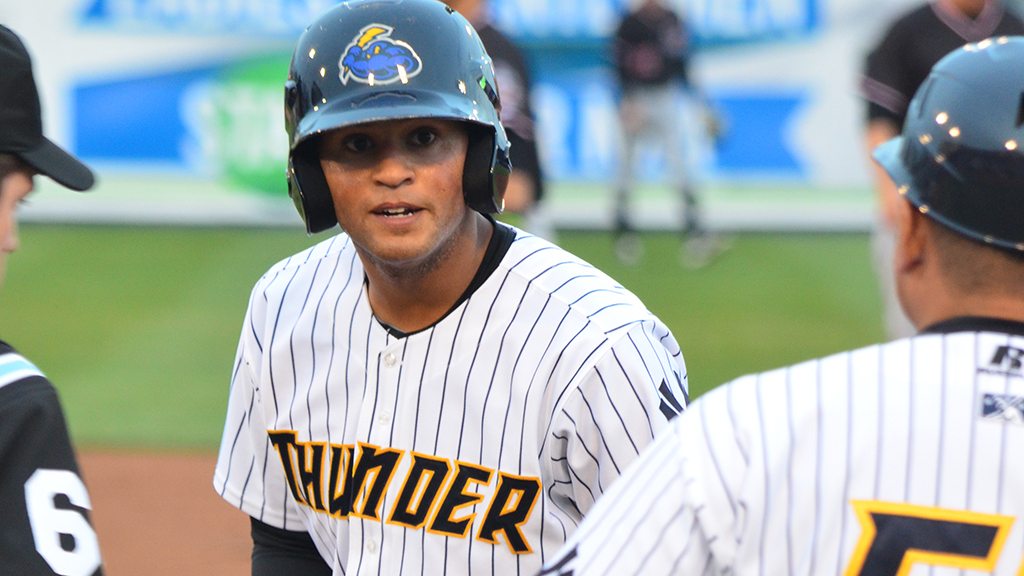 Of all the prospects in the Yankees system, outfielder Mason Williams might be the most interesting. Not in a positive way.

The 23-year-old, the son of former New England Patriots wide receiver Derwin Williams, and generational relative of former major-leaguer Walt (No Neck) Williams, who finished his career with the Yankees, is coming off a Double-A Trenton season in which he hit a paltry .223 (113-for-507) with just 27 extra-base hits.

Williams has taken to slapping at the ball, a poor man’s version of Ichiro. What results are usually grounders to the infield or fly balls to the warning track and minuscule percentages as far as on-base (.290) and slugging (304) are concerned.

Offensively, the man has nothing on the legendary guitarist of the same name who produced Classical Gas.

“Just what is he doing at the plate?” asked a scout from a National League team. “I know they are working with him. His defense is just so spectacular.”

There is the enigma of the enigma. Williams has not really performed offensively since he ht .304 (84-for-276) with eight homers at Class-A Charleston in 2012, following it up with a .277 (23-for-83) effort at Tampa. Taken in the fourth-round in 2010 and signed by scout Jeff Deardoeff out of Winter Garden, Fla., he was given a Yankees arrival time of 2015.

Then, there was that DUI arrest in April 2013 and a so-so season at the plate in Tampa in which he batted .261 (106-for-406), but took steps back in power and consistency. More steps were taken the wrong way in 2014, as players such as Jake Cave, Taylor Dugas and Ramon Flores blew right past him as the Yankees gave Jacoby Ellsbury and Brett Gardner long-term contracts.

“I made a mistake,” Williams said during a chat last season in Trenton. “I learned from it. I feel I am taking a much more mature approach to the game.”

He’s a young guy playing baseball. Certainly also not something to repeat.

To his credit, his defense has improved each year. His routes to the ball are sound. He can patrol vast areas of center field. He has the type of vertical leap that allows him to reach over an 8-foot wall and rob a batter of a home run. In Trenton defensively in 2014, he looked like a carbon-copy of former Thunder All-Star Austin Jackson.

Several scouts agree, defensively, his center-field game is quite close to being major-league ready.

“Mason certainly looks the part in the outfield,” said Trenton manager Tony Franklin. “He makes some spectacular plays and all the key ones as well. We’re working to help him get better at the plate.

Williams agreed on that point.

“Marcus (Thames, the 2014 Trenton hitting coach who is highly regarded) is working very hard with me,” he said. “We’re looking at film, at what I’m doing, trying for more consistency. I know I have to see pitchers bettering take a better approach.

”I have confidence my hitting will improve, and I’m willing to put the work in. I know what it takes.”

Williams began the season as the Thunder leadoff hitter, but was replaced by Cave, who hit .273 (48-for-176) in Trenton after batting .304 (117-for-385) at Class-A Advanced Tampa in 2014. Cave is compared to a young Gardner by some scouts. Williams continued to scuffle, hitting lower in the order.

His future is more than clouded in the Yankees organization. With Ellsbury and Gardner signed to long-term contracts, prospect Aaron Judge on the fast track to take over right field in 2016 and Flores positioning himself to be a fourth outfielder, Williams only fits as a late-inning defensive replacement. His defense is that good.

The Yankees have decisions to make on both Williams and the oft-injured Slade Heathcott, who status is also dropping quickly. Will either wear Pinstripes, or make their possible marks in another system?

“His defense makes one think about what he could be,” said a scout from an American League team.

An enigma for sure.