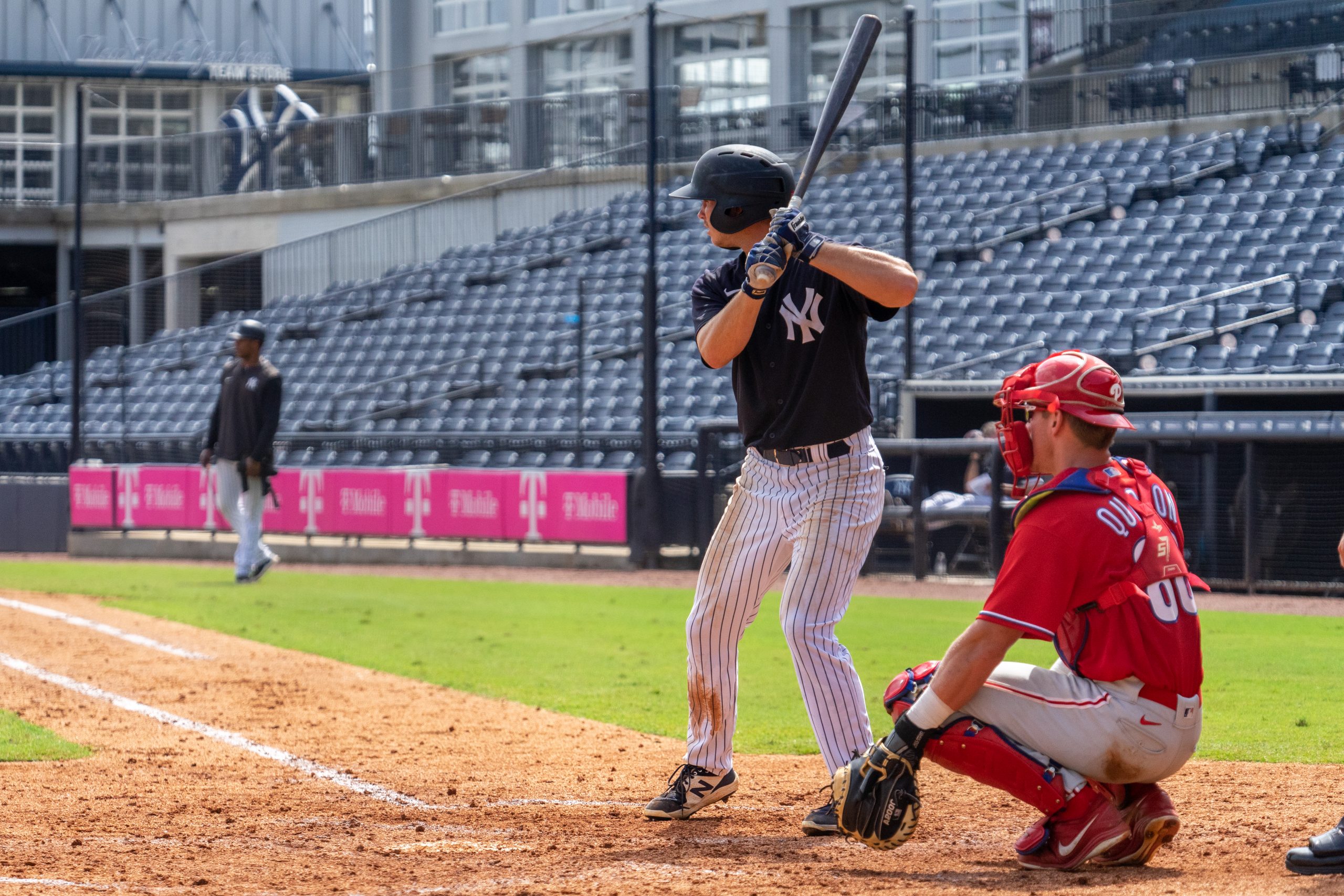 Those who have followed the Yankees farm system in the recent past know of the good talent they have in the minors currently. While there are a number of “household name” shortstops with the likes of Peraza, Volpe and Sweeney, most of that talent resides in the outfield. Over the next few days, let’s take a look at the different levels of the system, and the talent the Yankees possess that they will have to manage in the coming weeks as we head into the 2022 season.

Between the two teams, the Yankees have five outfielders with an OPS over .700. Altogether, there’s 12 OFs, but it’s safe to imagine that not everyone will make the trip over to the states and play in Tampa this coming season (or at all). We’ll focus on the top three with the highest OPS here.

Daury Arias stands out amongst the pack; he has the greatest slugging percentage and OPS (.486 and .902, respectively) along with the lowest K/AB of the 5 (17%), and actually has the lowest strikeout rate amongst all Yankees minor league outfielders. Arias also had 49 RBI in 2021, with 8 HR. five of which came with men on base, including one grand slam. Definitely respectable for first pro year stats, and wouldn’t be surprised to see him get to play with the Complex League Yankees at some point.

Mauro Bonifacio has the next best stats, but that may be attributed to only getting half the ABs of the others in this grouping (81 ABs compared to an average of 180 ABs). That being said, Bonifacio held the highest slugging percentage of the group at .556 and had a respectable .247 batting average in 2021. Bonifacio also had the most home runs per AB, hitting a home run in 9% of ABs. Only Everson Pereira had a greater number of home runs per AB at 11% of ABs amongst Yankee minor league outfielders.

Felix Negueis rounds out the DSL list, and Negueis had the highest batting average of the group at .299. Negueis also had the most doubles of the group at 17, accounting for almost a third of his hits (58 H).

Top-30 prospect Fidel Montero (#28) didn’t make this list because he didn’t put up good numbers in 2021 compared to the other three players mentioned. In fact, he had the lowest batting average (.193), slugging percentage (.339) and OPS (.726) among the top 5 outfielders in the DSL.

That doesn’t mean he doesn’t have the potential to perform, but it does mean there’s some work ahead of him to hold up to the top-30 status. With 90 Ks in 171 ABs (a 53% K/AB rate), it’s possible that a fix in plate discipline could help his performance dramatically.

After seeing players like Everson Pereira, Aldenis Sanchez and Jasson Dominguez move up within the system, a number of other players within the FCL got the opportunity to get more ABs.

This one’s a little more difficult to compare stats because the re-org created a lot more of a logjam at the lower levels. In 2021, the (then) GCL Yankees had two teams, but the re-org condensed that into one team, giving some players less of a chance to play. Teams in the Complex League did switch out players in the 7th inning, but 2-3 innings of play still isn’t a lot of experience. That being said, we’re only picking the two players who got the most ABs of the five. The three other players (Knowles, Pries and Rosario) combined had less at bat opportunities in 2021 than Salinas on this list, for example.

Grant Richardson, the Yankees’ 17th round pick in the 2021 draft, leads the stats here. Richardson signed only a day before making his pro debut with some of the other 2021 draftees in late July, but still was able to get 93 ABs in that short time. Richardson batted .269 in that time, with a .376 on-base percentage, a .516 slugging percentage, and a .892 OPS.

Raimfer Salinas moved onto Pipeline’s top-30 prospect list (#30) at the tail end of the year, and for good reason. Salinas has shown the plus-speed as Pipeline ranks him, along with a plus arm, which combine for a good combo in as large an outfield as you’ll find at Yankee Stadium (and Steinbrenner Field by proxy). Salinas had a .250 batting average and a .796 OPS in 2021 and likely would’ve been promoted to Low-A Tampa in mid-July with former fellow teammates Dominguez, Green and Sanchez had there not been so many outfielders on the Tarpons to begin with.