The New York Yankees Are Building A Brighter Future 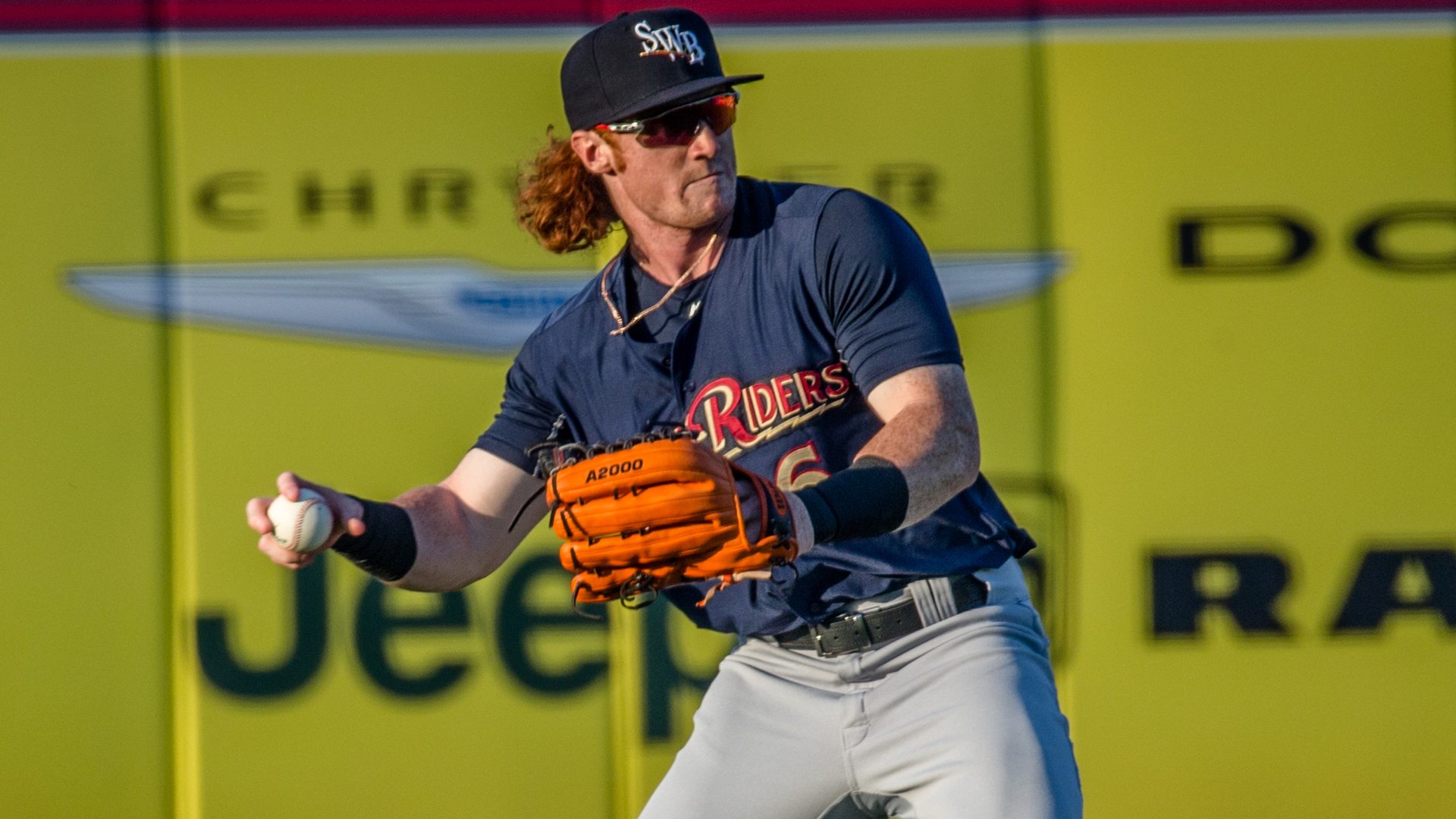 For years the New York Yankees have lived under the mantra of win the World Series or bust. That same mantra lead the team to the mediocrity that they find themselves mired in today. The Yankees have always been the big game hunters in free agency and on the trade market. However, the game and the times have changed. For the first time in Brian Cashman’s tenure, the Bronx Bombers became sellers at the trade deadline.

The results on the field spoke loud and clear; selling was a necessity. This year’s trade deadline was a perfect storm for the Yankees to maximize their return on three of the best chips on the market. The Cleveland Indians, Chicago Cubs, and Texas Rangers are all in a position to make a deep playoff run, have excellent farm systems and desired to make key additions to shift the balance of power in their favor. 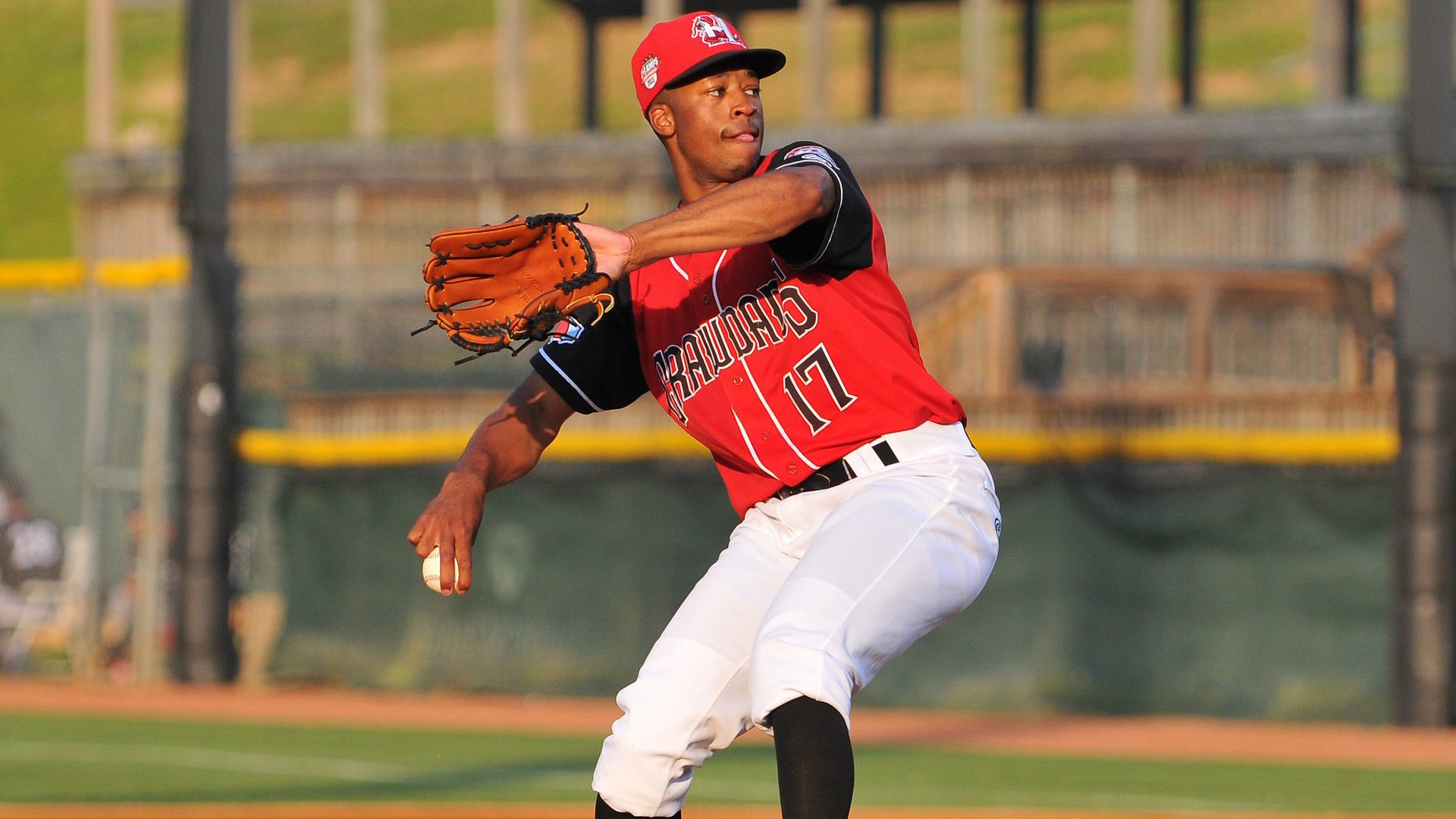 The first domino that fell was sending fireballing closer Aroldis Chapman to the Cubs. Theo Epstein acquired arguably the premier closer on the market, but he paid a steep price. In return for Chapman, the Yankees received the Cubs’ top prospect in shortstop Gleyber Torres, pitcher Adam Warren, No. 5 prospect outfielder Billy McKinney and center fielder Rashad Crawford.

With the haul that Cashman brought back in the Chapman deal, many speculated that the Yankees would only trade Andrew Miller if the team was overwhelmed with an offer. A premier closer in his own right, Miller had an even higher value with two years of control remaining on his contract at a below market salary. The Yankees would cash in big, when they traded Miller to the Indians for their top prospect in outfielder Clint Frazier, No. 5 prospect pitcher Justus Sheffield, No. 30 prospect pitcher Ben Heller, as well as pitcher J.P. Feyereisen.

Once Miller and Chapman were traded, attention turned to Carlos Beltran, the Yankees best hitter, impending free agent and seasoned playoff veteran. While it came down to the end, Beltran would find himself a Texas Ranger before the 4 p.m. deadline.   This deal didn’t net New York a blue-chip prospect such as Frazier or Torres, but it did net them a former first round draft pick in pitcher Dillon Tate, pitcher Nick Green, and pitcher Erik Swanson. Tate, the center of this deal, is the type of talent that wouldn’t have been available if it weren’t for his struggles and velocity drop this season. However,  if the Yankees development staff can fix his issues, they may have a steal and a frontline starter. 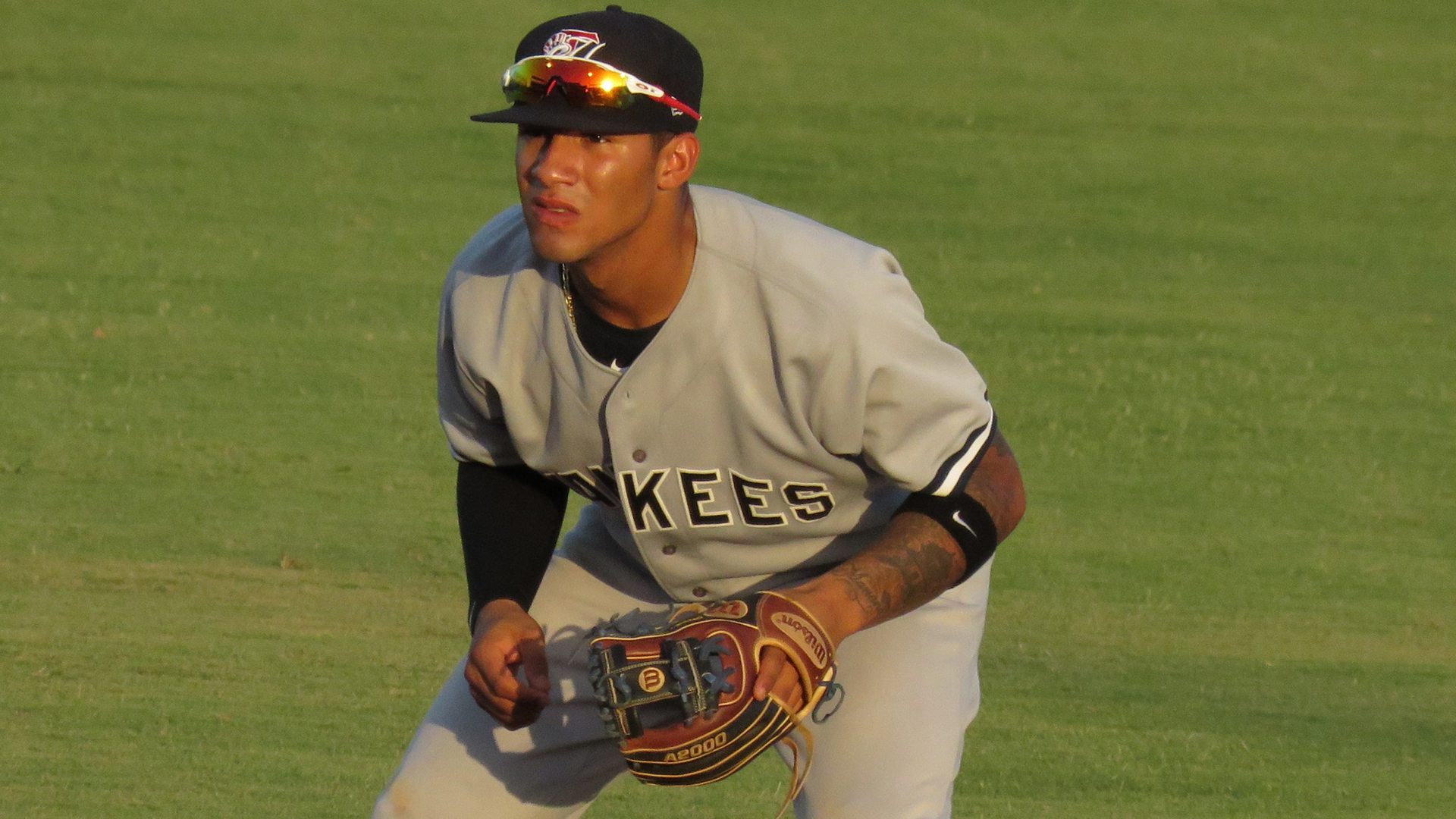 Here’s a look at the Yankees Top-10 Prospects by MLB.com.

Looking at this list, three players stand out due to their near Major League readiness. Those players are Clint Frazier, Aaron Judge, and Gary Sanchez. All three are franchise cornerstones with Frazier possessing a 5-tool skillset and potential 30-home run power. Judge, of course, plays solid defense and offers immense power. Sanchez has made tremendous strides defensively and offers power at a premium position that typically is a trademark for the Yankees. Scouts that I’ve spoken with feel, he will be an All-Star in the big leagues.

A little further away, Mateo and Torres are dynamic up-the-middle players. Mateo is a burner that has 80-grade speed, and an overall package made him the Yankees No. 1 prospect before the trade deadline deals took place. Torres, the centerpiece of the Chapman trade, offers a well-rounded package of speed, defense, power, and maturity. Both are currently members of the Tampa Yankees, New York’s Advanced-A affiliate.

Widely considered to be a top-ten talent, the Yankees were able to grab outfielder Blake Rutherford with the 18th overall pick in the 2016 MLB Amateur Draft. Rutherford is a high-end, athletic player that is considered a five-tool player. Already off to a fast start (.446 average, 2 HR, and a 1.080 OPS) with Rookie ball affiliate Pulaski, Rutherford could very well be a quick mover going forward.

Miguel Andujar is a player that is having the breakout season that fans and the Yankees have been waiting for. Looking at Andujar, there are three key strengths to his game; power, quick hands, and a strong arm. So far in his career, he has advanced a level per season. Now in Double-A Trenton, he should be knocking on the door of the Bronx late in 2017.

While position players highlight most of the top-ten list, three pitchers on the list have plenty of intrigue. The recently acquired southpaw Justus Sheffield offers mid-rotation upside but has plenty of development ahead. James Kaprielian, the team’s first-round draft pick from 2015, was on the fast track to the Bronx before a strained flexor tendon derailed his season. Righty, Domingo Acevedo comes in at 6-foot-7 and delivers high velocity. The biggest key to Acevedo will be the continued development of his secondary pitches. If they develop, he could be a frontline starting pitcher, if not, he could be a force out of the bullpen. 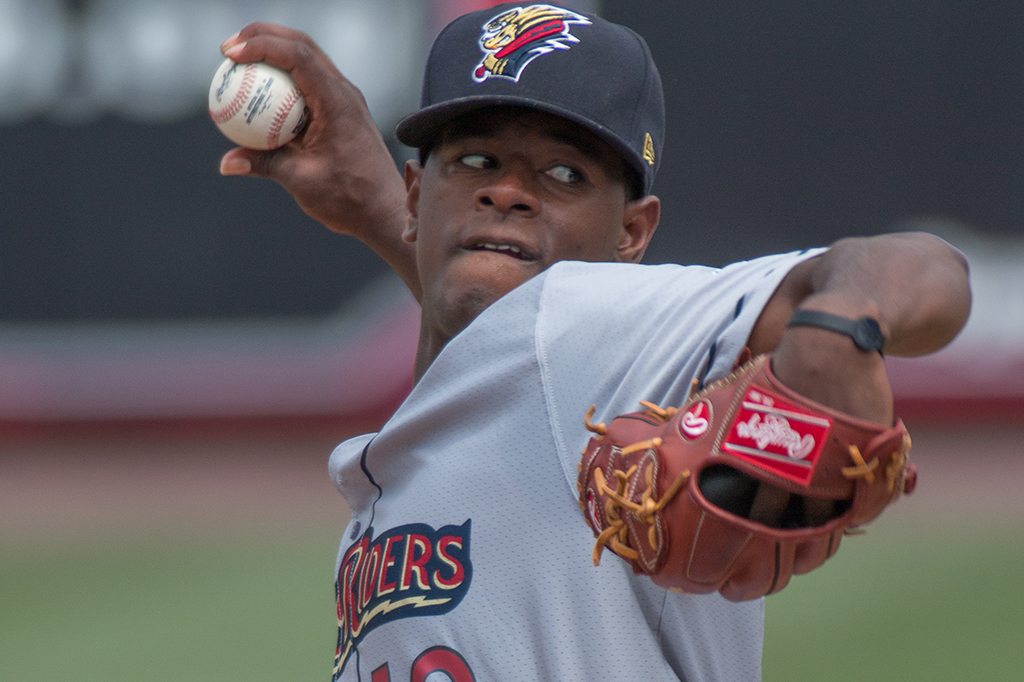 With the season beginning to wind down, people will start to look towards the 2017 season. Do the Yankees still have work to get back to the championship status that they and their fanbase are accustomed to, of course. Are any of the prospects that they have a guarantee, of course not.

As of now, it certainly appears that Greg Bird, Did Gregorius, Gary Sanchez, Aaron Judge and Luis Severino all begin next season playing prominent roles for the Bronx Bombers. This group of players will be the core in which the next playoff run will be born. Add the excitement of Clint Frazier likely to force the clubs hand in the second half with others in the mix as well, and the ingredients are beginning to take shape for the next chapter in Yankees history.

That’s not to say that there won’t be struggles or adjustments to be made, that is a given. Will the Yankees look to compete in 2017, no question. Is it realistic to think that they will be in World Series contention? Not in my opinion, unless they make a series of trades for starting pitching. Patience will be a virtue and now is the time to see their plan through. Going through the rough 2016 and the growing pains of 2017, could pay off royally in 2018 and beyond. 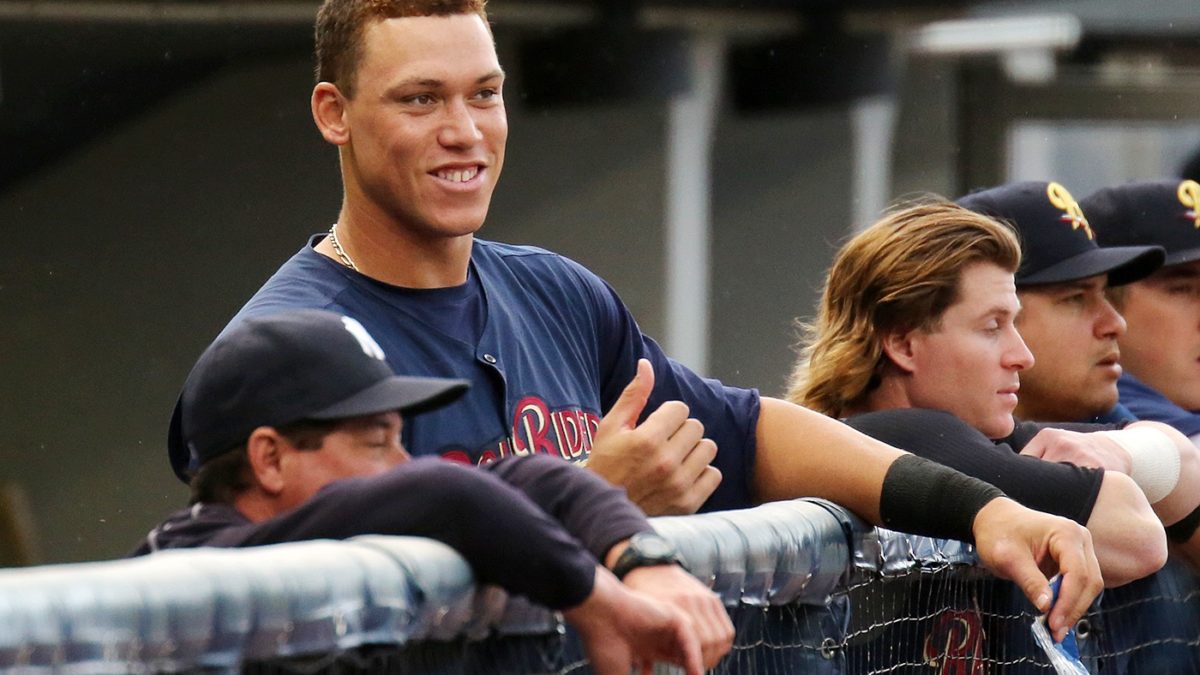 Yankees ownership and Brian Cashman already had the redevelopment wheels in motion as I wrote in this article. So where does this newfound bounty of riches leave the Yankees going forward? First and foremost, there’s legitimate young impact talent that will be on display in the Bronx very soon, with a pipeline of more to come. Second, this will give Brian Cashman payroll flexibility to make a run at some of the young, premier players that are expected to be a part of an epic 2018 free agent class.  Last, but not least, this allows the Yankees to have the ability to make trades for any player on the market.

While one chapter of Yankees history came to a close this season, another chapter in their history will begin in 2017. Will this chapter mimic the “Core Four” era? Nobody knows. One thing is for sure with payroll coming off of the books and one of the top two farm systems; it’s an exciting time for the “Yankees Universe” and one filled with pressure for Brian Cashman and his development staff.