The Pros and Cons of the Yankees signing Bryce Harper 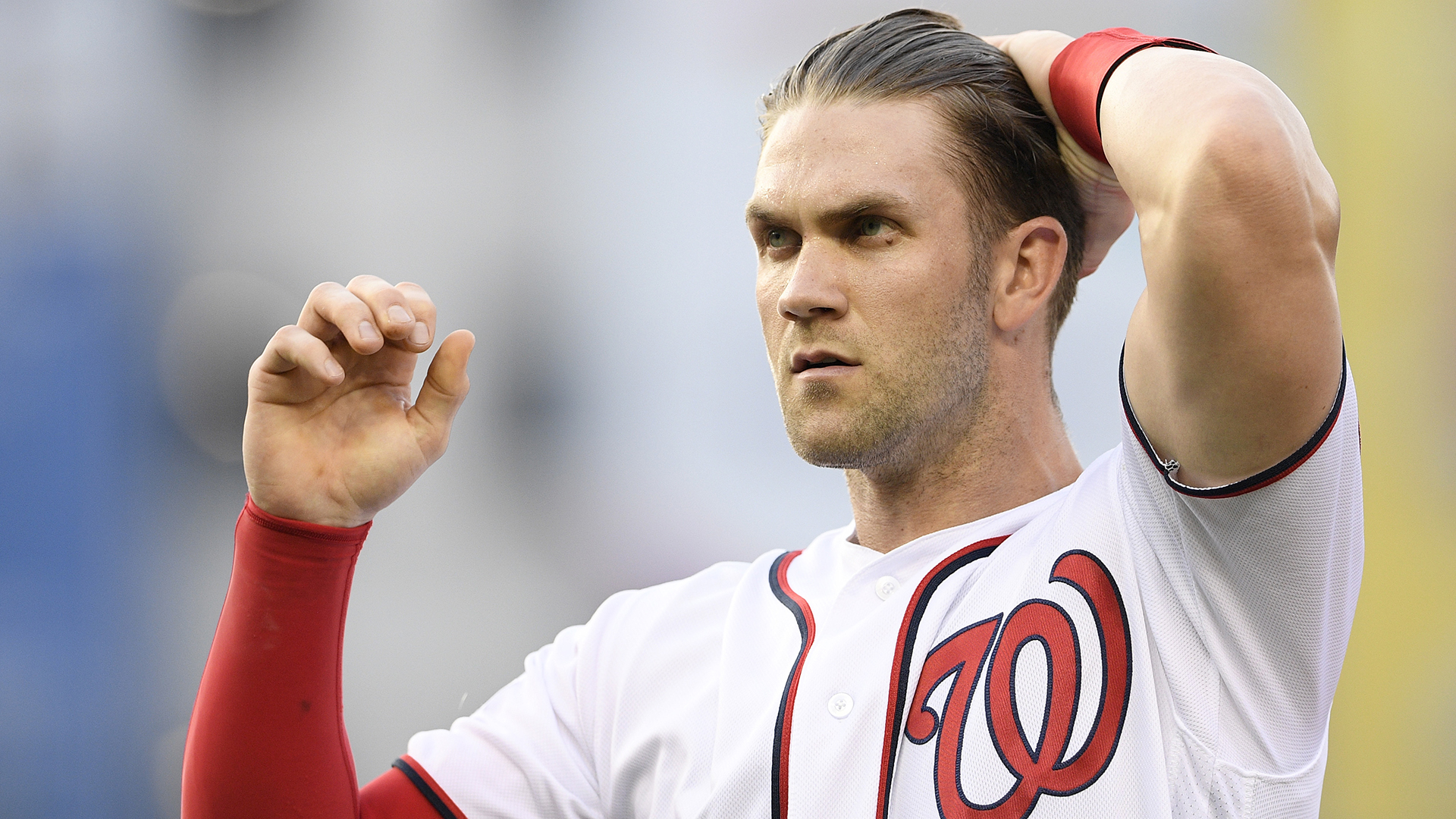 Washington Nationals' Bryce Harper runs his hand through his hair as he stands on the field after the third inning of a baseball game against the New York Yankees, Monday, June 18, 2018, in Washington. This game is a makeup of a postponed game from May 16. (AP Photo/Nick Wass)

The 2018-2019 Major League Baseball offseason is officially underway. What would a winter be without linking the New York Yankees to the prize of the entire free agent class? In this article, we reached a verdict on whether New York should make a run at signing the 26-year old superstar Bryce Harper after looking at the pros and cons. 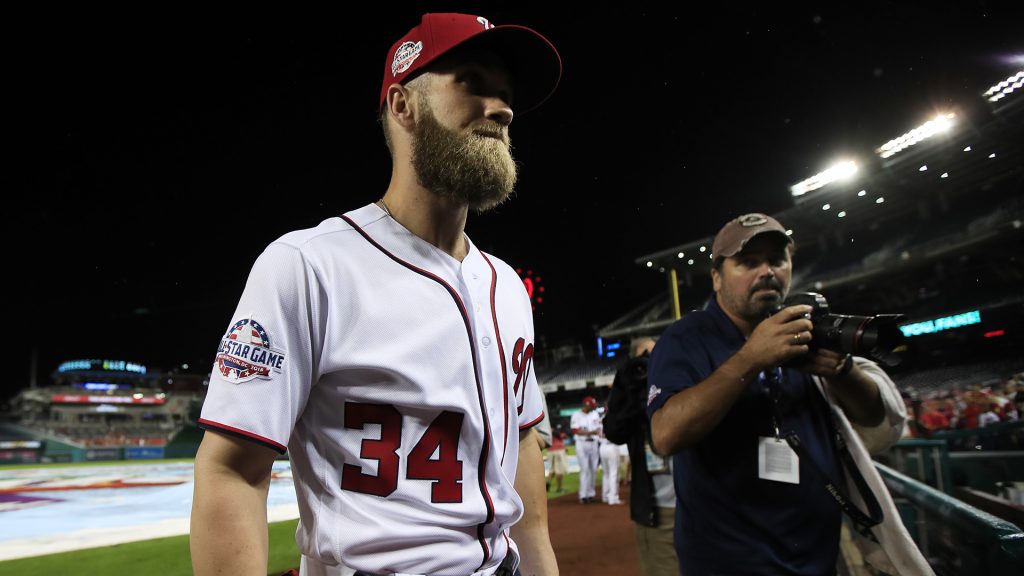 Washington Nationals Bryce Harper (34) leaves the field after the Nationals ended their last home game of the season with a 9-3 rain-delayed win against the Miami Marlins in Washington, Wednesday, Sept. 26, 2018. (AP Photo/Manuel Balce Ceneta)

There is no question that Bryce is a Hall of Fame type of talent. He just turned 26 on October 16th and already has a career WAR of 27.4, 184 career home runs, and a career .900 OPS. The Las Vegas, Nevada native’s elite performance has garnered plenty of accolades such as a National League Most Valuable Player Award (2015), Rookie of the Year Award (2012), Silver Slugger Award (2015), Home Run Derby champion honors (2018), National League Hank Aaron Award (2015) and was named to the National League All-Star team from 2012-2018.

When talking about acquiring a player of Bryce’s stature, you have to consider his marketability as he will become the new face of the franchise. Not to worry – he will sell jersey’s, tickets, and dramatically increase TV ratings on the YES Network. He’s the type of player, if acquired by New York, will undisputedly become the most prominent face of baseball due to his stature and market. Watching Bryce crush balls over that short porch in right field at Yankee Stadium would sure be entertaining. He would also be a nice left-handed hitting bat for manager Aaron Boone to pencil into his lineup in between a host of righties.

The upside of the left-handed hitting outfielder is arguably the best in baseball. He gets on base, hits for power can hit for average, and is a perennial MVP candidate & All-Star shoo-in every single year. 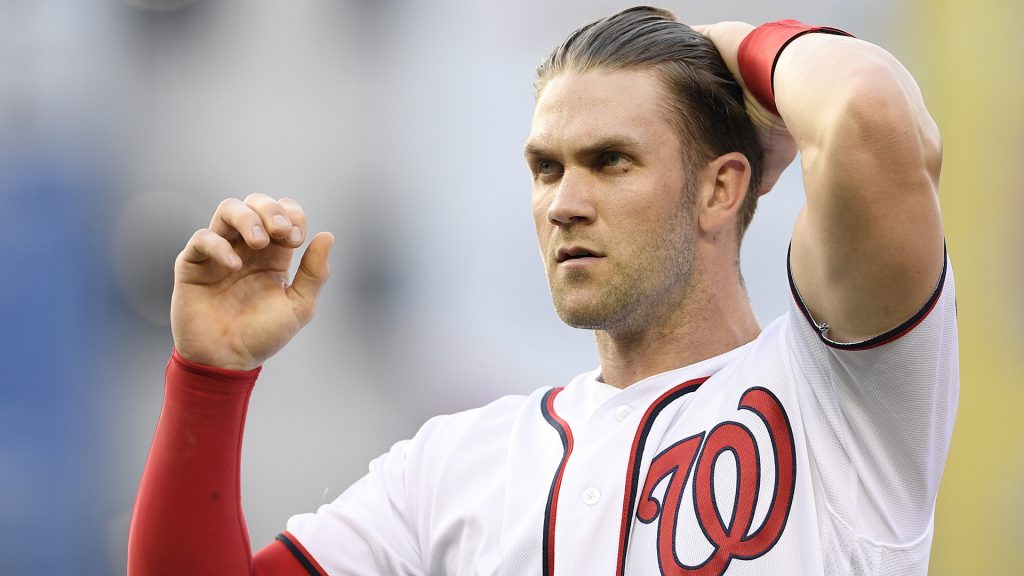 Washington Nationals’ Bryce Harper runs his hand through his hair as he stands on the field after the third inning of a baseball game against the New York Yankees, Monday, June 18, 2018, in Washington. This game is a makeup of a postponed game from May 16. (AP Photo/Nick Wass)

Signing Harper will not come cheap he will most likely become the highest paid player in the history of baseball. MLB TradeRumors predicted that the slugger would earn a contract worth $420 million over 14 years. That is a lot of money – especially for someone with an injury history and declining defensive numbers.

Granted that Bryce did appear in a career-high 159 games this past season, the All-Star appeared in just 111 games in 2017 and was limited to 120 games or less in two other seasons due to injury. Durability is an important factor to consider when signing any player, especially one for over $400 million.

Defense has been one of the Yankees strengths in the outfield in recent years as Brett Gardner, and Aaron Judge are considered for Gold Gloves on an annual basis and Jacoby Ellsbury & Aaron Hicks both play plus defense as well. With -26 Defensive Runs Saved and a UZR of -14.4, Harper ranked second to last in both of these defensive metrics in 2018. While Bryce’s arm grades as plus, his routes to balls have been questionable.

MLB Network’s Steve Phillips reported last week that the Yankees “will not be in on Harper.” I have to agree with the Yankees front office apparent assessment and think it is smart to steer clear of the former Washington National.

With Giancarlo Stanton signed for another 10+ years at an annual average in excess of $25 million per season, and Aaron Judge, who will be receiving a massive payday in a few years already cemented in the Yankees future, it is difficult to picture Hal Steinbrenner paying $40 million per year for Harper when the organization should prioritize on targeting starting pitching. Also, with Steinbrenner having shown his unwillingness to spend like his late father, it would surprise me to see Harper or Manny Machado in pinstripes in 2019 for that matter.

Another factor that needs to be brought up is Bryce’s postseason performance and lack of hitting in the clutch. The 2010 first overall pick is slashing just .211/.315/.487 over 19 playoff games (89 plate appearances).

In closing, after personally watching Harper closely for seven years he doesn’t seem like “the guy” or someone who is capable of becoming a true leader of a team. His ego could hamper clubhouse morale and negatively influence the young core that General Manager Brian Cashman has worked so hard to build.