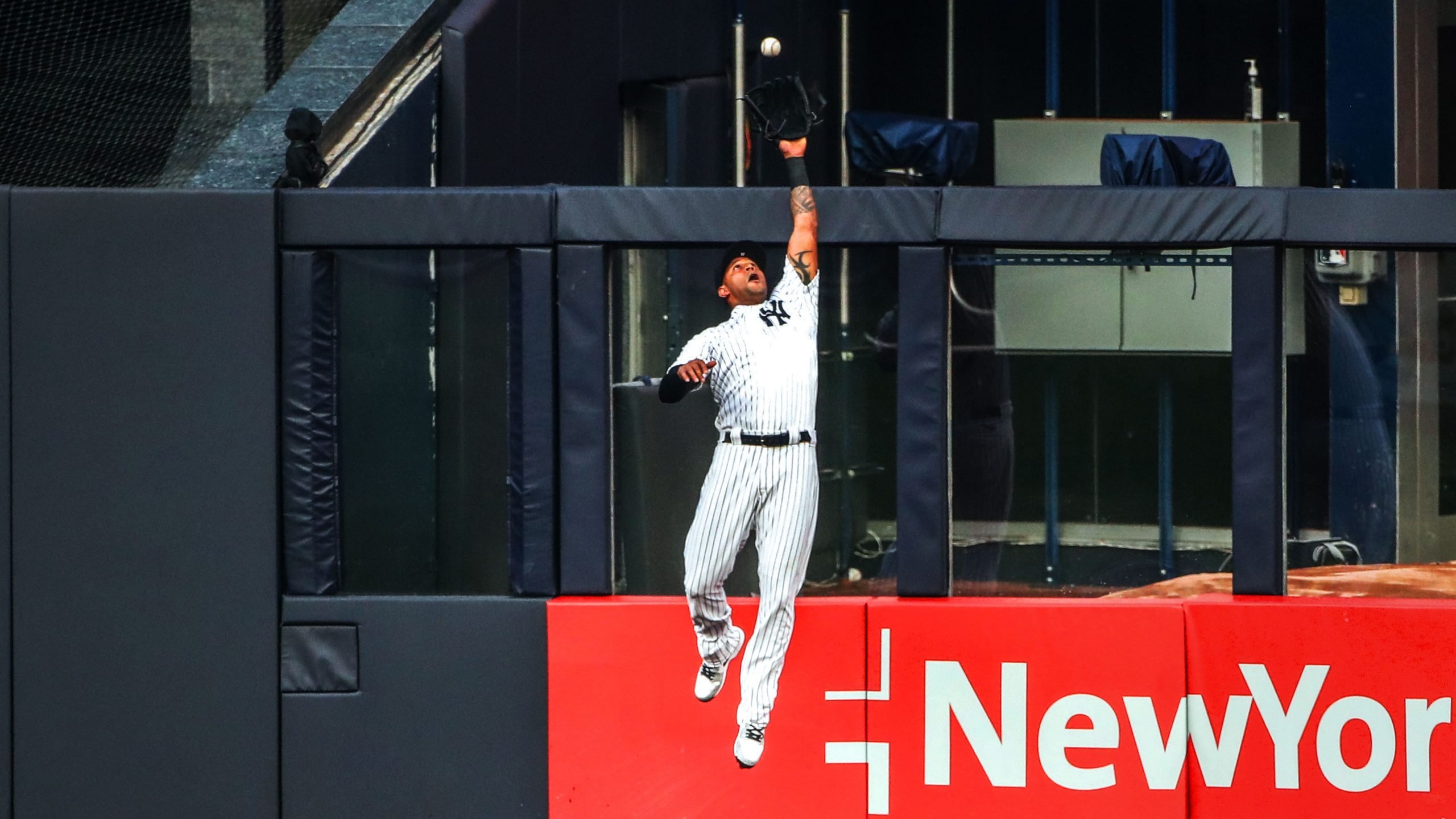 The Braves got the early lead in this one on a two-run home run by the Braves’ Johan Camargo who homered (3) on a line drive to right field that scored Nick Markakis. The Braves would have a 2-0 lead early over the Yankees.

In the bottom of the fourth, Aaron Hicks, who had a phenomenal catch in the first inning to rob the Braves of a home run, doubled (4) on a line drive to center field. DJ LeMahieu scored, and the Yankees took a 3-2 lead over the Braves in the fourth.

Later in the bottom of the fourth, Gleyber Torres singled on a fly ball to right field that scored Aaron Hicks, and the Yankees took a 4-2 lead over the Braves.

In the bottom of the fifth inning, it was DJ LeMahieu again with a single on a fly ball to right field that scored Clint Frazier. The Yankees extended their lead to a 5-2 lead over the Braves.

Following LeMahieu, it was Luke Voit with a single to center field that scored DJ LeMahieu. The Yankees extended their lead to 6-2 over the Braves.

In the top of the ninth, the Braves attempted to make a comeback as Travis d’Arnaud, who was robbed of a first inning home run by Aaron Hicks, singled on a line drive to right field and scored Dansby Swanson. The Braves would bring the game to 6-3 Yankees.

That’s where the scoring would subside as the Yankees went on to win this one and sweep the Braves at home by a score of 6-3.

Aaron Boone met with the media following tonight’s game. He spoke about Clint Frazier’s three hit, one RBI, two run performance, stating it was a great night for Frazier, who homered out of the gate and got deep into counts and smoked a single and a double as well. Aaron Boone stating that having a single, double, and a homer is a pretty good return. Boone stating he wasn’t surprised and that Frazier has been in a really good place this year. Boone stating he’s excited to see Frazier come up and have an impact and that he was clearly ready tonight.

Aaron Boone spoke on DJ LeMahieu’s four hit, one RBI, two hit outing, stating that LeMahieu’s pretty good and though he started the year a bit delayed with COVID, he picked up where he left off last year laying the barrel on the ball. LeMahieu is currently leading the American League in hitting. Boone stating he wouldn’t be surprised if he won the title, stating that he’s got a pretty good track record of doing that.

Masahiro Tanaka went four innings, giving up five hits, two runs, two walks, a home run, and collecting three strikeouts. Boone stated that Tanaka was alright tonight, but that he didn’t think he was as strong as his last time out, but that he made pitches when he had to and gave the Yankees four solid innings tonight.

Aaron Boone also spoke on the bullpen, who collected fifteen outs tonight for the Yankees. Boone stating they were really good and that Loaisiga threw the ball well and was really efficient, Green, Ottavino, and Avilan all pitching well as well. Boone spoke on Zach Britton continuing to make pitches and not letting anything affect him, stating he can generate weak contact and did that tonight to end the game.

Aaron Boone stated how overall the defense and offense were both strong tonight and that it was good to see the Yankees play a complete game tonight. Boone stating that it feels like a pennant race with the edge, urgency, and butterflies you have on the field. He stated every pitch and every swing feels big.

Clint Frazier had a three hit, one RBI, two run night for the Yankees. Tonight was his seventh career three-hit game. Frazier stating that tonight was fun and that it felt good for him to get his first at bat out of the way. Frazier stating he feels like he’s a little more advanced in some areas now, and was glad he was able to start tonight with a bang with this game being his first of 2020. Frazier stating it felt good to get instant results, saying Gary Sanchez set the tone for the inning, and he just tried to build off of Sanchez. Frazier said he’s feels grateful that he was able to play tonight and that he’s built on his offense and defense the past year and made some simple plays tonight. He also stated that his mental game is much improved. Frazier stating that tonight was a great night overall for everybody.

Frazier stated that he enjoys playing in New York and that though there’s no fans, it’s still a competitive atmosphere and one that allows players to have big moments.

DJ LeMahieu had four hits, an RBI, and two runs tonight for the Yankees. LeMahieu stating he feels pretty locked in right now and is part of a really good lineup. He stated tonight that he was trying to be tough on pitchers and do his part to get on base.

LeMahieu won the batting title in 2016 and currently leads the American League in hitting this season as well. LeMahieu stated he has the same type of confidence that he had in 2016. He spoke on hitting .400 in a 60-game season, stating it’s possible, but he’s not focused on that. He stated he focuses on working hard and trying to put himself in the best place to succeed at the plate.

LeMahieu stated that it feels good to have a night like tonight and that it’s a fun night and feels good going into an off-day.

Masahiro Tanaka met with the media following his four-inning outing tonight. He stated he was not as efficient tonight as his last outing and did not have his best stuff. Tanaka stating, he was able to keep the Braves off-balanced enough through four innings to keep the runs to four runs, but that overall it was just an ok outing tonight in his eyes.