From the Dominican Summer League to Triple-A, these Yankees prospects have faced a bump in the road that they will need to overcome in 2022.

The former number 1 Yankees prospect struggled in 2021 after mechanical adjustments in 2020, posting a 6.85 ERA with Triple-A Scranton. He allowed more than two home runs per nine innings, walked a career-high 15.6% of batters, and opponents hit .285 off him. 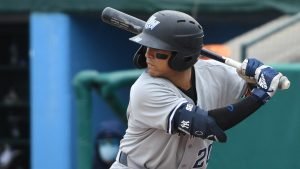 The Yankees 23rd overall pick in the 2018 MLB Draft (signed for $2.8 million), Seigler’s career has been plagued by injuries, playing only 95 games in his four professional seasons. He’s dealt with hamstring, quadricep, and knee injuries in his brief career, plus has grappled with concussions.

Even when healthy, Seigler has not been the player the Yankees hoped they drafted. He’s hit .217 and slugged only .324 through his career, and hit just five homers in those 95 games.

Seigler will turn 23 next season, which is the final year before I officially put the bust stamp on his career.

It’s worth noting, Seigler was also scouted as a pitcher out of high school, where he posted a 1.09 ERA his senior year as a switch-pitcher. Yeah, that’s right, he’s ambidextrous.

The Blue Jays drafted Hagen Danner as a catcher in 2018 with their second-round pick, and after he struggled his first few seasons, they moved him to the mound, where he is now one of their top prospects. Maybe the Yankees could try that out with Seigler. 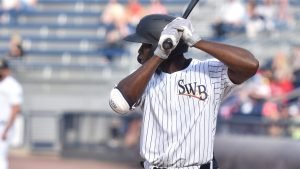 Florial hit .218 in Scranton last season and struggled in the plate discipline department, with 112 strikeouts in 78 games. Once the Yankees top prospect, Florial has been shuttled between Triple-A and the big leagues a total of 10 times in the past two seasons and has never found consistent playing time. Especially with current questions surrounding the Yankees center field position, no year is bigger than 2022 for Florial to prove if he can be a consistent contributor for the big league team.

The 18-year-old Montero signed with the Yankees as an international free agent in 2021 for $450,000 and greatly struggled for the DSL Yankees during his first professional season.

The right-handed outfielder hit .193, striking out 90 times in 52 games, a whopping 40% of his at-bats. He stole 19 bases and hit four home runs, but with that strikeout rate, he’ll have trouble making it out of the backfields. Montero needs a big rebound season in 2022 to prove that he can put the ball in play. 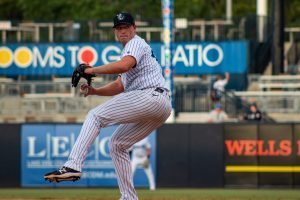 The Yankees second-round pick in 2017, Sauer pitched adequately over his first two professional seasons with the GCL Yankees in 2017 and Staten Island Yankees in 2018. Two starts into his 2019 season, he underwent Tommy John Surgery.

In his return to the mound in 2021, he pitched to a 4.69 ERA and allowed 13 home runs in 21 starts between Tampa and Hudson Valley. He struck out 10.27 per nine and showcased improved control, but was hit hard throughout the year.

Sauer will turn 23 in 2022, which is a make or break season for the right-handed starter.

Montero (no relation to Fidel) was the Yankees prized signing in the 2021 international class, receiving a signing bonus of $1.7 million out of the Dominican Republic. Similar to Fidel, he did not quite live up to expectations his first summer of professional ball.

I assume he’ll be stateside in 2022, playing in the FCL, and he will need to improve his bat-to-ball skills and prove he can handle the pitching as he climbs through the minors.