J.A Happ was all but a write off at the beginning of the 2020 MLB season. He came out of the gates and suffered two tough starts, throwing a combined seven innings while allowing eight earned runs on seven hits and striking out just three.

But those two solid starts would be followed up by another clunker against the Mets at Citi Field on September 3rd. Happ allowed four earned runs on eight hits in five innings pitched, striking out four.

At that point, then, the story of J.A Happ’s season was inconsistency. He had also created some divisiveness with his anger in regards to how the Yankees were handling his vesting option. But at that point, he didn’t seem to have much of a leg to stand on.

Since that start, though, Happ appears to have found some consistency. He’s thrown 19.1 innings allowing just three earned runs. The most impressive part? Happ has recorded 24 strikeouts and walked just two batters over this recent stretch. He’s certainly let his play do the talking when it comes to his disgruntlement. But you have to give Happ some credit, despite the distraction he has found his step.

Aside from the ups and downs on the season, Happ’s ERA sits at a very respectable 3.25, with a 3.51 xERA. There’s not much to imply that he is getting significantly lucky, as his wOBA sits at .279 while his xwOBA sits at .315. His .235 BABIP would certainly explain a bit that luck has been on his side, but that’s the type of pitcher he is.

He is going to allow hitters to put the ball in play. If he’s going to do that, though, it requires a certain level of barrel awareness, which he has had this season. His sweet spot % is at a career low 26.2 %, while his Hard Hit % has improved as well.

What we can surmise from that low barrel %, then, is that Happ has tightened up his location as the season has progressed. Happ’s best approach is when his two-seam fastball is down and in to lefties, and his four-seam fastball is at the top of the zone to righties. So let’s take a look at how each has changed over the course of the season.

Here’s a heatmap (courtesy of FanGraphs), of Happ’s fastballs to right-handed batters in his first three starts. 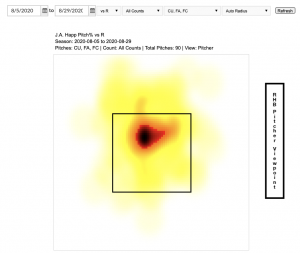 Happ tends to keep his four seamer up to righties, and that would look to be the case here. However, he wasn’t doing a great job at keeping the ball at the very top of the zone. If we look at another heatmap below, we can actually see that, since his first three starts, he’s done a better job at elevating his fastball to righties. 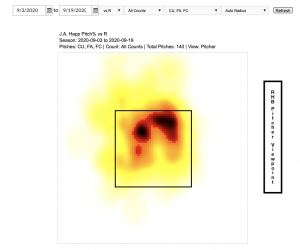 When it comes to lefties, he is at his best when he keeps his two-seamer down and in. 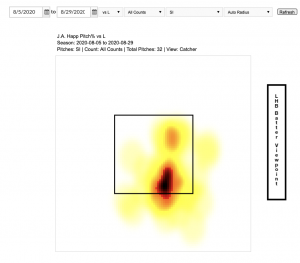 The Heatmap above is from his starts in August. As you can see, the two-seamer leaked a bit out over the plate, and he even had issues leaving it up in the zone at times. In the heatmap below, though, you can see just how much he has tightened it up in his last three starts. 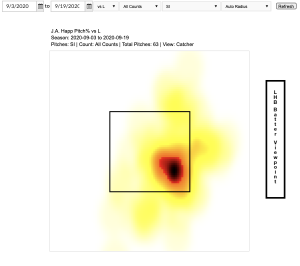 He has kept the ball in more, and has also kept it in the zone. But I want to look back at the first heatmap of his two-seamers, specifically the hot spot that is up in the zone. After looking for some examples where he got burned on leaving his two-seamer up, I came across Bryce Harper‘s home run off of him on August 5th. You can see that pitch here, courtesy of Statcast.

He also gave up a similar home run to Rio Ruiz on July 30th, you can see that home run here. Though it’s a small sample, and clearly a bit of confirmation bias on my part, it would appear that Happ gets burned by lefties when he leaves his two-seam fastball, which FanGraphs and Statcast classify as a sinker, up in the zone.

We can take a deeper look at Happ’s fastball and two-seamer by looking at some of the expected numbers on each pitch by month. On his four-seam, Happ’s xwOBA was .334 in July, .331 in August, and sits at .239 in September.

As for the two-seamer, it was its worst in July, in terms of location. His xWOBA on his two seamer, granted he only threw ten of them, was .795 in July. In August it was .218 and in September it sits at .250. We can also look at his spin rate for some more evidence.

It would also appear that Happ has simply improved on his fastball combination, outside of just location. Based on the spin rate, that would at least seem to be the case.

Time will tell if J.A Happ will play a role in the postseason. Jordan Montgomery, despite some poor results, may have something to say about that. But there is a world where the Yankees are left with no choice but to trust Happ, especially given the dearth of off days in the Postseason.

Among the great storylines of this Yankees season has been the resurgence of second baseman Gleyber Torres. Torres, 25, has had a rough couple of seasons. The pandemic-shortened 2020 season nearly derailed Torres’ once promising career. He admitted to getting a little out of shape after spring training was stopped and had a difficult time […]

Monday night was unfamiliarly demoralizing. I normally pay very little attention to baseball after the Yankees are eliminated, and certainly have never been too emotional about a matchup between two teams that are not mine, but watching the Red Sox celebrate their relatively easy 3-1 ALDS win struck a raw chord. Perhaps it was the […]

Let’s play a little guessing game to kill some time during this COVID-ruined weekend, shall we? Name this Yankees reliever based on his 2019 Statcast percentile chart. Looks pretty good. That whiff percentage is positively Ottavino-esque. K rate is a little low, so maybe Zack Britton? Wrong. You’re looking at Luis Cessa. The maddeningly inconsistent […]