The news started speculating when the Rangers scratched Gallo from Wednesday night’s game against the Diamondbacks. It was announced shortly after that Gallo was on the move to New York.

Not only is Gallo strong at the plate, but he is strong with his glove too. He won a gold glove in 2020 and leads the major leagues with 14 defensive runs saved this season.

The Rangers are getting a good group of prospects in return for Gallo.

Smith, the right-handed second baseman from Louisiana State was drafted in the second round of the 2019 MLB draft. He has split the 2021 season between Low-A Tampa and High-A Hudson Valley.  Smith has also been hitting very well this season. He has hit .321/.448/.641, with a 1.089 OPS between Tampa and Hudson Valley, with 12 doubles, three triples, 24 RBI’s, and 44 runs scored. He also has 17 stolen bases. 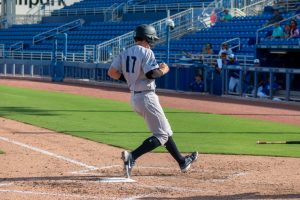 The Yankees currently sit in third place in the AL East, three games behind Boston, while also trailing the Rays for second place. There hope is Gallo can help produce some offensive power and kick-start their offense into gear to make a run at playoffs.

The deal is not final until Gallo has cleared the Medical checks.

Gary Sanchez showed he means business going 2-for-3 with a 2-run home run and throwing out Grichuk at second late in the game. Romano (1-0) took the win for the Blue Jays and Nelson (0-1) took the loss for the Yankees. Cole has a Strong Debut but Earns No Decision Gerrit Cole came out strong […]

Mike Tauchman’s time as a Yankee has come to an end. The Yankees traded Tuachman on Tuesday to the San Francisco Giants for left-handed pitcher Wandy Peralta and a player to be named later. Tauchman was initially acquired by the Yankees in 2019 in the dealt that sent Phillip Diehl to the Colorado Rockies. During […]

After 98 long days (at least 43 of which were waiting on the league to make an offer, let’s never forget that), Major League Baseball and its Players Association have reached a tentative deal on a new 5-year collective bargaining agreement, ending the owner-imposed lockout. Interestingly enough, the Yankees voted against the proposal, but nonetheless […]