MLB rolled out the ballots for this year’s MLB All-Star Game, which will be held July 19 at Dodger Stadium. Fans can vote up to five times per day until June 30 on mlb.com.

We know Aaron Judge will be there. He’s the far and away the AL MVP. Each at-bat is must-see TV. So which Yanks will join No. 99 in LA? Let’s go around the diamond.

Catcher: Jose Trevino is an amazing story line. I had no idea who he was until he started hitting walk offs on his Dad’s birthday and catching me right in the feels. He’s slashing .309/.356/.505 in 39 games. He’s tied for 2nd in WAR amongst all catchers, alongside Alejandro Kirk. Kirk slightly squeaks out Trevino in most offensive categories, but lags well behind in defense. Can Jose get there? He sure can. Will he? Only if you stuff the ballot box. 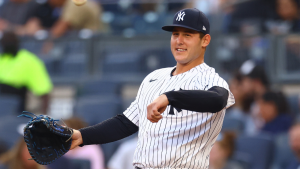 First Base: Like Judge, Anthony Rizzo seems to homer every single time up. He homered in the first 3 games of the season and has 15 on the year. He’s playing outstanding defense, as usual. Slashing .216/.319/.454. He is just 11th amongst AL First Baseman in WAR, 7th in wRC, but leads in home runs and RBI.  He could definitely make the team, and I think he will given his popularity.

Second Base: The Gleyber Torres Renaissance continues. I’m driving the Gleyber Train to LA and I want you to come along for the ride. Torres needed a bounce back season after a couple of down years. He homered against the Cubs, who originally signed him as a teenager. Slashing .212/.299/.495 and playing a stellar second. Every day seems to be Gleyber Day for the new Dad. Get this man in the starting 9.

Shortstop: We at Pinstripe Perspective started the season bullish on IKF. He’s not doing much to stave off the minor league trio of Oswald Peraza, Anthony Volpe or Trey Sweeney. Slashing .263/.314/.306 while playing so-so defense at short. Wouldn’t bet on him making the roster.

Third Base: Josh Donaldson probably doesn’t win the fan vote or any popularity vote. We waited for a Donaldson controversy and he delivered. The Yanks sustained, but Donaldson’s been inconsistent.

Left Field: Joey Gallo. This guy’s been an all star in year’s past, and he was last season’s big splash at the deadline. But his time in New York’s be a fight at the plate. There’s few players I’m rooting harder for than Gallo, I just hope there’s time for him to turn it around in The Bronx. Not earning a trip west this season.

Center field: Aaron Hicks. My disdain for Hicks is well documented. He stinks every way imaginable. He badly misjudged a ball in Sunday’s game and it turned into an adventure before he managed to both catch the ball and avoid injury. Nope, he’s not an all start. 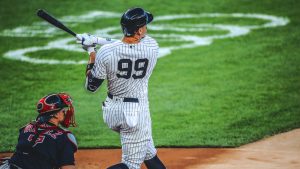 Right field: Aaron Judge. The baddest man on the planet. The franchise cornerstone and the best player on the best team in baseball should garner the most votes.

Designated Hitter: Giancarlo Stanton. Welcome back, Big G! Stanton had a Gallo-esque start to his Yankees career. But he seems back to MVP form. He hits homers that get out of the box faster than a Ferrari. Yanks fans will need to stuff the ballot box for Stanton to edge out Shohei Ohtani and Yordan Alvarez. So get after it, Yankees Universe.

Pitching: Gerrit Cole, and Nestor Cortes should be locks. Severino, Taillon and Clay Holmes all deserve recognition as well, but it will come down to the wire.

It’s been a wild and whacky week for the New York Yankees. Aaron Judge returned to play after apparently being 100% the whole time, just to re-injure himself in his first game back. Gerrit Cole, while having solid stuff, is getting hit harder than he has in a long time. The Mets walked off the […]

Their Story So Far The Yankees (33-15) head back home after a tough series split in Tampa to take on the struggling Angels (27-22). The Yankees have been hit hard with the injury bug this past week and should be relieved to be matched up with a reeling, albeit dangerous, Angels team. The Halos enter […]

For the fourth straight season, Yankees’ fans have been handed the same old story. “We’re close.” And the reality of it is, that’s true. The Yankees are close, but Yankees fans don’t care about close. I think fans cared about close in 2017 and 2018. They don’t want to be close anymore, they want to […]