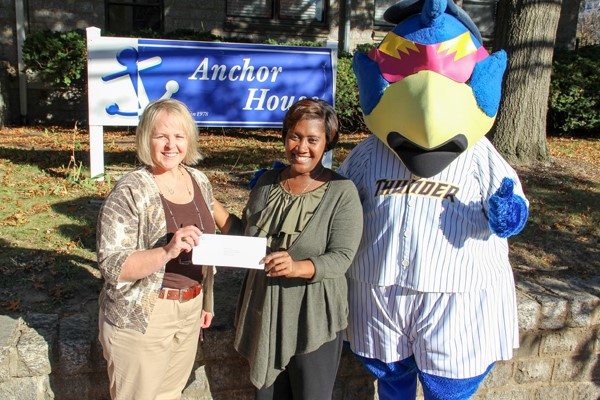 Boomer gives a big "thumbs-up" as Marie Roessel, left, from NJM Insurance Group presents a check to Kim McNear, Executive Director of Anchor House, as the beneficiary of the "Safe at Home" program, in which NJM contributes money to support a worthy non-profit organization based on the number of runs the Thunder score at ARM & HAMMER Park over the course of the season. (Trenton Thunder)

The Thunder, Double-A affiliate of the New York Yankees, scored 254 runs on their way to 40 wins at ARM & HAMMER Park this season, but the real winner this season was Anchor House, located at 482 Centre Street in Trenton, thanks to NJM Insurance Group and its Safe at Home program.

“Thanks to the outstanding work of the Thunder offense this season and NJM Insurance, Anchor House can further their mission to work with abused, homeless, runaway, at risk and aging out youth to utilize their strengths and the support of their families and communities in order to ensure a stable and successful home,” said Thunder GM/COO Jeff Hurley. “This program is precisely the type of program that the Thunder strive to promote; one that includes a great corporate partner, NJM, and enriches our community and its residents.”

“One of NJM’s core values is to support the communities we have the privilege to serve, and we’ve truly enjoyed parterning with the Trenton Thunder for the Safe at Home program,” said NJM Corporate Communications Administrator Eric Stenson. “This program helps very deserving nonprofit organizations in the capital city such as Anchor House, whose work is critically important in the lives of so many young people in need.”

The 2016 season, the 23rd in franchise history, will begin at ARM & HAMMER Park on April 7 when the Thunder host the Erie SeaWolves (Detroit Tigers) at 7:00 p.m. Season tickets and group outings are on sale now by calling 609-394-3300. For more information on the Thunder, visit www.TrentonThunder.com.

The Thunder, Double-A Affiliate of the New York Yankees, play in the 12 team Eastern League. The Thunder have drawn over 8.8 million fans to ARM & HAMMER Park over 22 years and have won the three major awards that Minor League Baseball teams can win; the Johnson Trophy for the “Nation’s Best Franchise” (2005), the Larry MacPhail Trophy for Outstanding Club Promotion (2003) and the Bob Frietas Award for Long-Term Success (1998, given by Baseball America). The team has given back over $5.7 million worth of goods, services and monetary donations through Trenton Thunder Charities, under the Grand Slam We Care Foundation umbrella. The Thunder can be found online at trentonthunder.com, facebook.com/trentonthunder, twitter.com/trentonthunder and on youtube.com/AATrentonThunder.