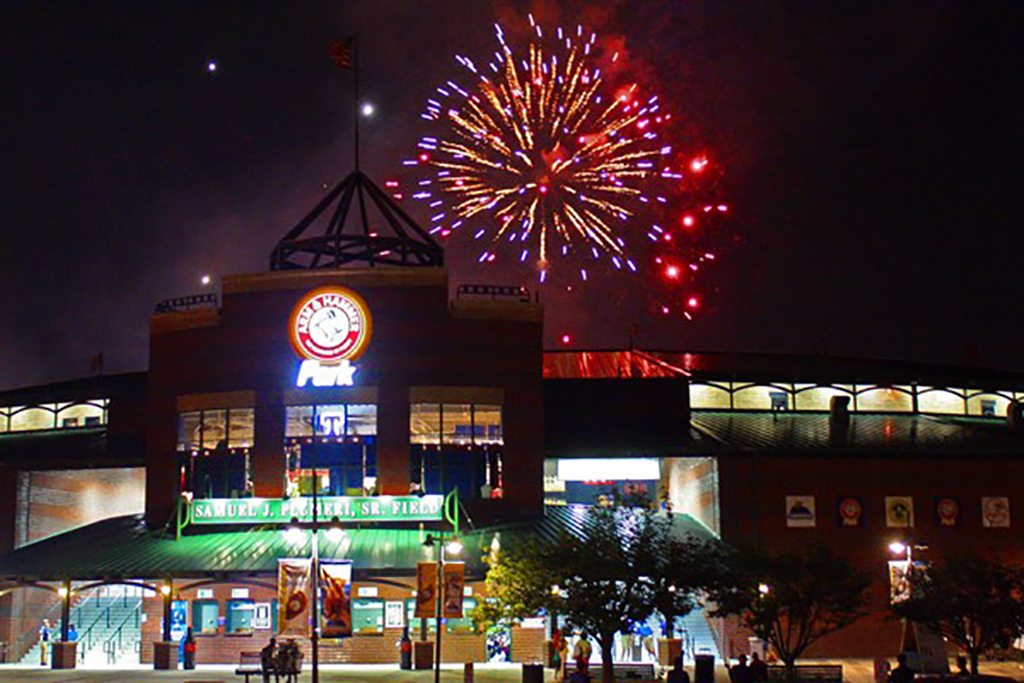 The Thunder, Double-A affiliate of the New York Yankees, are proud to announce the first round of promotions for the 2016 season. 2016 marks the 23rd season of play at ARM & HAMMER Park and it promises to be a fun-filled summer with great giveaways, 21 fireworks shows and family-friendly promotions throughout the season.

“I know I speak for many fans when I say that I can’t wait for the 2016 season to get started,” said Thunder GM/COO Jeff Hurley. “We have dozens of great promotions for next season and we are thrilled to announce some of them today.”

The first theme night of the season will come on Earth Day, Friday, April 22, and the Thunder will celebrate with the first 1,000 fans, ages 6 and older, receiving Earth Day baseballs presented by the Mercer County Improvement Authority. The Thunder will celebrate Superhero night an Friday, May 6 by wearing special Superhero Jerseys and after the game all fans will be treated to a spectacular fireworks show.

Sunday, May 8 will feature a special Mother’s Day giveaway. The first 1,000 fans, ages 21 and older, will receive a Thunder Wine Glass. The Thunder will also host a Mother’s Day Brunch and Baseball event in the Yankee Club and Conference Center, for more information contact Group Sales Manager Jon Bodnar at 609-394-3300 x104 or by email at JBodnar@trentonthunder.com.

Boomer will celebrate his birthday with all of his closest mascot friends on Sunday, May 15 when the Reading Fightin Phils (Philadelphia Phillies) finish off a four-game series against the Thunder. May 15 will also feature a special kids giveaway to be announced at a later date.

Breast Cancer Awareness night returns to ARM & HAMMER Park on Friday, June 3 when the Thunder host the Erie Seawolves (Detroit Tigers). The night will feature a Pink Cap giveaway to the first 1,500 fans, ages 18 and up, presented by RAI and the Thunder will wear special pink jersey’s which will be auctioned off to support Breast Cancer research after the game.

The Thunder’s annual team card set giveaway, presented by Verizon Wireless, will take place on Friday, June 17 when the team hosts the Binghamton Mets (New York Mets). The first 1,500 fans, ages 6 and up, will receive the baseball card set.

On Friday, July 1, when the Thunder host the Richmond Flying Squirrels (San Francisco Giants) the first 1,000 fans, ages 6 and up, will get an OxiClean Clothes Hamper.

One of the most popular giveaways each season at ARM & HAMMER Park are bobblehead dolls that honor outstanding players dressed in a Thunder uniform. The first giveaway will take place on Friday, July 15 when fans will receive a Greg Bird bobblehead, presented by Hyundai. The second bobblehead doll giveaway will happen on Friday, July 29 when the Thunder host the Altoona Curve (Pittsburgh Pirates). The final bobblehead giveaway scheduled for the 2016 season will occur on Friday, September 2 when the Thunder begin a four-game series with the Reading Fightin Phils. All bobblehead giveaways are for the first 2,000 fans, ages 14 and up.

The team’s tenth annual Bark at the Park, presented by Dogs & Cats Rule, will take place on Sunday, August 14 when the Thunder host the New Hampshire Fisher Cats (Toronto Blue Jays). Fans can bring their well-behaved dog to the game free of charge.

Daily specials at ARM & HAMMER Park will continue in 2016 with a brand new special on Wednesday nights. Wednesday’s will feature a pair of daily specials, wine will be sold by the glass for $2.50 and all fans can take part in Baseball Bingo for great prizes at every Wednesday night game. Tuesday nights are Super Value Tuesdays with $1 hot dogs, presented by Black Bear Franks and Thirsty Thursday returns with select beers sold for $2.

Distribution of promotional items is for Guests in attendance only, while supplies last. All promotions, dates and giveaways are subject to change and/or cancellation.

The 2016 season, the 23rd in franchise history, will begin at ARM & HAMMER Park on April 7 when the Thunder host the Erie SeaWolves (Detroit Tigers) at 7:00 p.m. Season tickets, group outings, Pic-A-Plans and Mini Plans are on sale now by calling 609-394-3300. For more information on the Thunder, visit www.TrentonThunder.com.