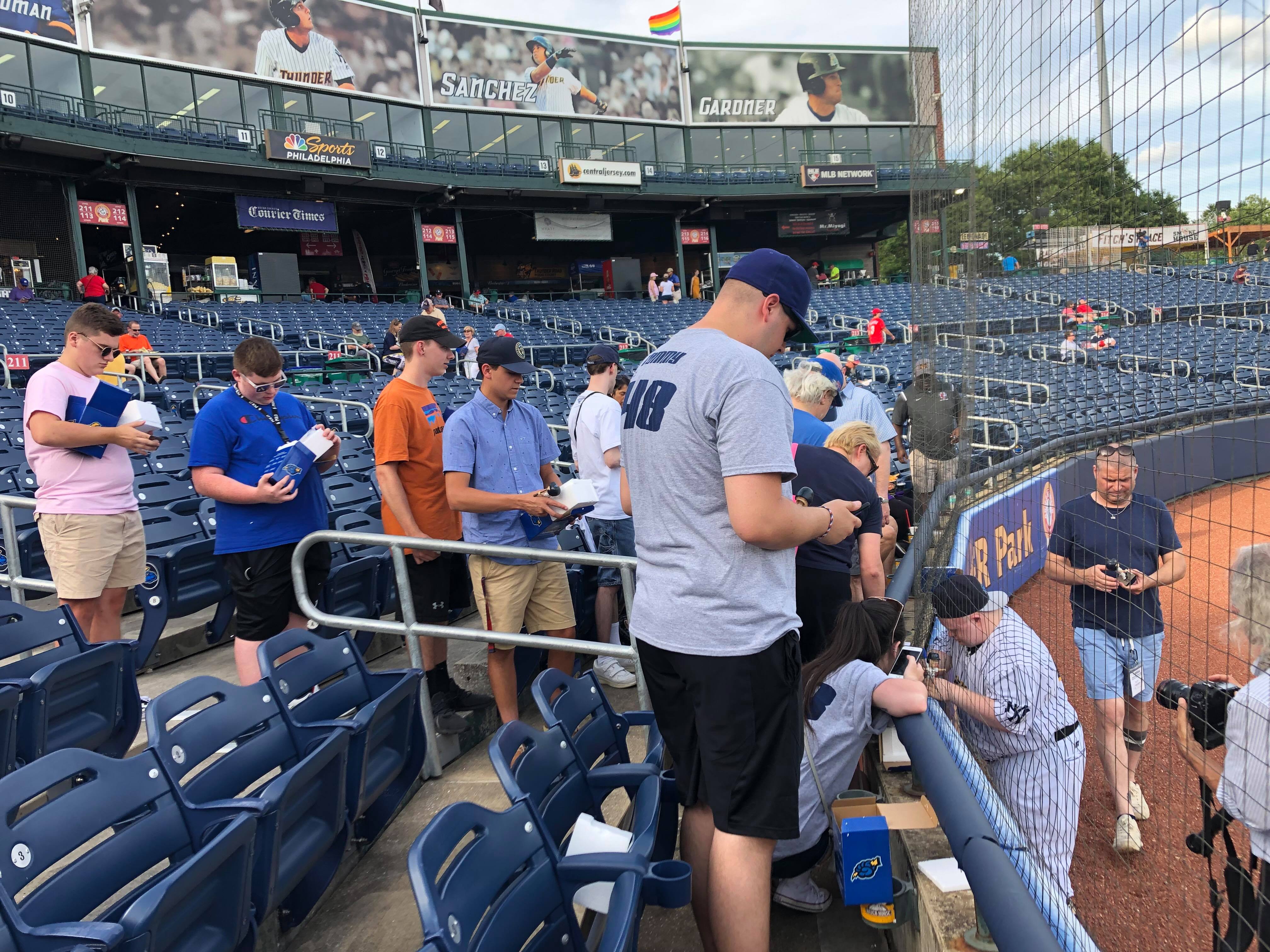 TRENTON– You’ve probably read the stories You’ve probably seen the photos and videos. You probably saw him standing next to Tim Tebow during the national anthem sporting a Binghamton Rumble Ponies uniform in his home ballpark.

Even if you don’t follow the Trenton Thunder or the New York Yankees organization, you might’ve heard about the legend that is Thunder Bat Boy Tommy Smith.

The thing about Tommy is, he isn’t your run of the mill bat boy. He’s become his own celebrity.

If it wasn’t evident enough that Tommy has reached celebratory status in the area, on June 25, the Thunder’s promotional giveaway that night was a bobblehead of their very own Bat Boy. 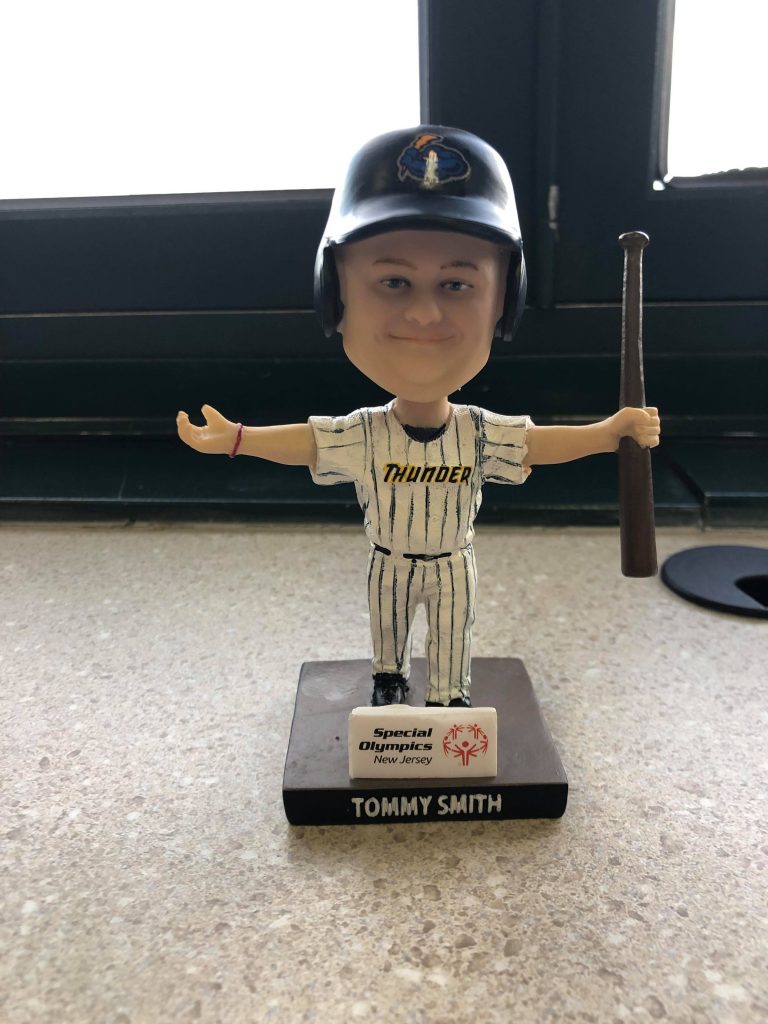 Fans turned out in droves to grab their own Tommy bobblehead and even lined up pre-game for him to sign it. 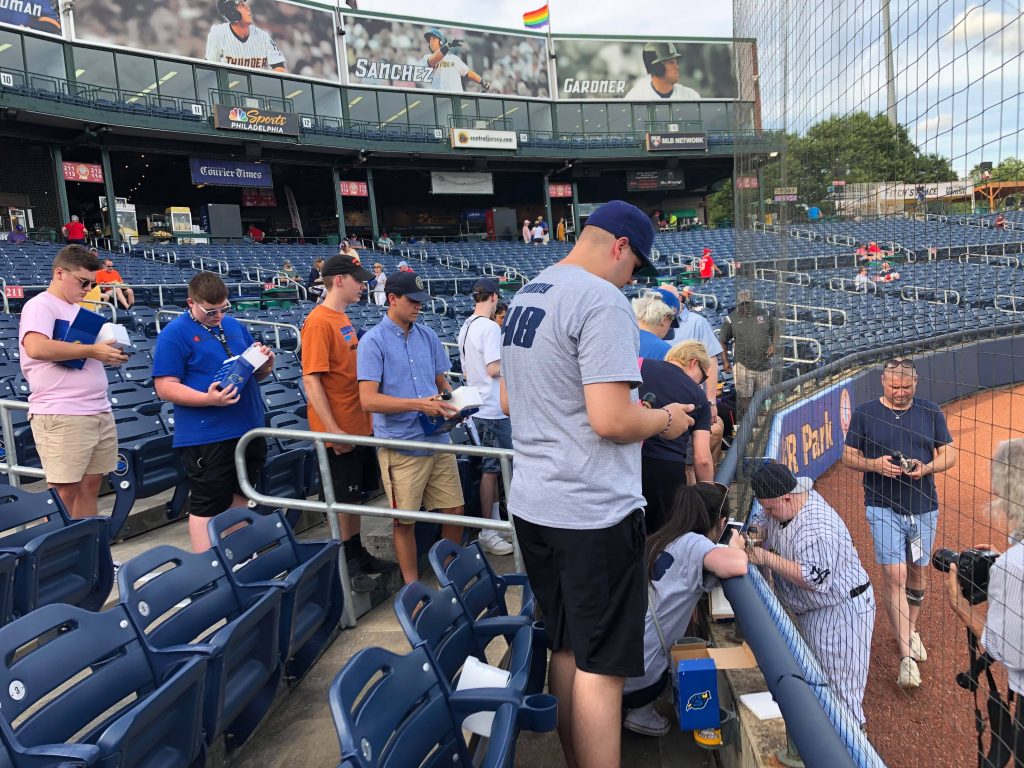 Tommy is entering his fourth season as one of the Thunder batboys and ask anyone who has come in contact with him, they have nothing but love for him.

“In life, you come across people that make you feel good and he fits that category,” Trenton Thunder manager Pat Osborn said. “I told his dad the first day I met him, being around Tommy, it’ll make us want to be a better person and that’s what he brings, he’s a special young man that everyone loves.”

Catch Tommy in the clubhouse before the game and you’ll hear the John Cena WWE theme song blaring in the clubhouse as he’ll be going through his “You can’t see me” routine (made famous by Cena) soon followed by a takedown of one of the Thunder players in the clubhouse.

“It’s awesome, it’s perfect,” Trenton Thunder catcher Jorge Saez said in regards to seeing Tommy’s bobblehead. “It would’ve been cool if they would’ve done him doing a John Cena move because that’s one of his favorite things to do but he’s great, he’s part of the team, he brings a lot of joy and excitement to the clubhouse and the guys love him.”

Recently, Saez was victim of one of Tommy’s takedowns.

“He got me for the first time the other day,” Saez said. “Before he wouldn’t do it, he got me, no one wanted it so he looked at me and I was like ‘okay go at it’.”

Saez has been with Trenton since the 2017 season and based off of clubhouse interactions that I’ve personally seen, Saez and Tommy have one of the many closest relationships on the team.

For example, while interviewing Saez, Tommy walked by and their exchange went as followed:

JS: “DID YOU SEE YOUR BOBBLEHEAD?”

That’s just one of the many interactions Tommy has with the Thunder players and coaches on a daily basis. In fact, you don’t even need to meet him to already have a Tommy story in your arsenal.

“I remember in Spring Training this year, I spent a week in big league camp and we were out on the back field, field 2 there at Steinbrenner and guys were stretching and it was Mike Ford and Greg Bird,” Osborn said. “And they were talking about it because I guess Tommy is a huge Mike Ford fan and that was the first time I had heard about Tommy so I was coming into this season anxious to meet him.”

“I love having him around man, he’s just a great young man.” Osborn added.