A night after coming off of their first extra-innings victory (2-1) of the season, the Thunder took care of business much sooner on Saturday night. Trenton’s offense exploded for eight hits and seven runs in the second inning – where they sent 11 batters to the plate – en route to a 7-3 victory over the Bowie Baysox at ARM & HAMMER Park.

“We had a lot of good situational hitting,” said Thunder Manager Bobby Mitchell. “You know, getting guys over to third, hitting the other way with someone on second and nobody out. Base hits, really, and it’s good to see the players can do that and put it into action when they practice it every day in BP.

“And then we ran the bases really good too. I thought we were very aggressive today.”

Baysox starter Matthew Grimes (2-6) entered the night with some momentum on his side – having given up just three earned runs over his last 14 innings pitched. But, the righty fell into a buzzsaw in the form of Trenton’s offense as the Thunder started the seconding inning with five straight hits (and three runs) before the first out was recorded. 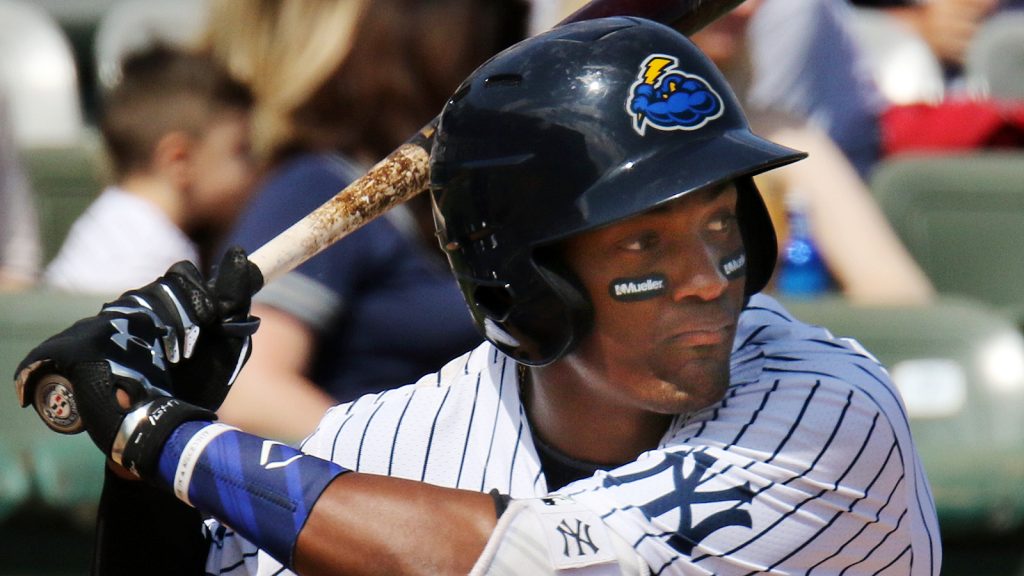 And that out was the last Grimes (1.1IP, 8H, 7R, 7ER, 2BB, K, balk) would get in this game, as the next batter was Trenton’s Miguel Andujar and he crushed a 1-1 pitch well beyond the fence in left-centerfield that got almost all of the 7,496 at the ballpark on their feet and blew this game open: 6-1.

“That was huge,” Mitchell said of the three-run home run. “That brought us from three to six. We’re always trying to get a five-run lead, and that got us there at that point. We obviously didn’t finish with it because of the runs they scored (in the eighth), but we’re always trying to get it to a five-run lead so that a grand slam doesn’t hurt us.

“You know, (Adujar) has got a really nice swing going, and he’s patient at the plate. And like I said, that home run was huge, and it was in a deep part of the ballpark too.”

On the bump for the Thunder (39-21), Nestor Cortes (4-0) navigated his way through the Baysox (38-22) lineup for five innings where he scattered four hits, walked none, and fanned four. The only blemish on the night for Cortes was a solo shot he surrendered to Bowie catcher Chris O’Brien to lead off the third inning. 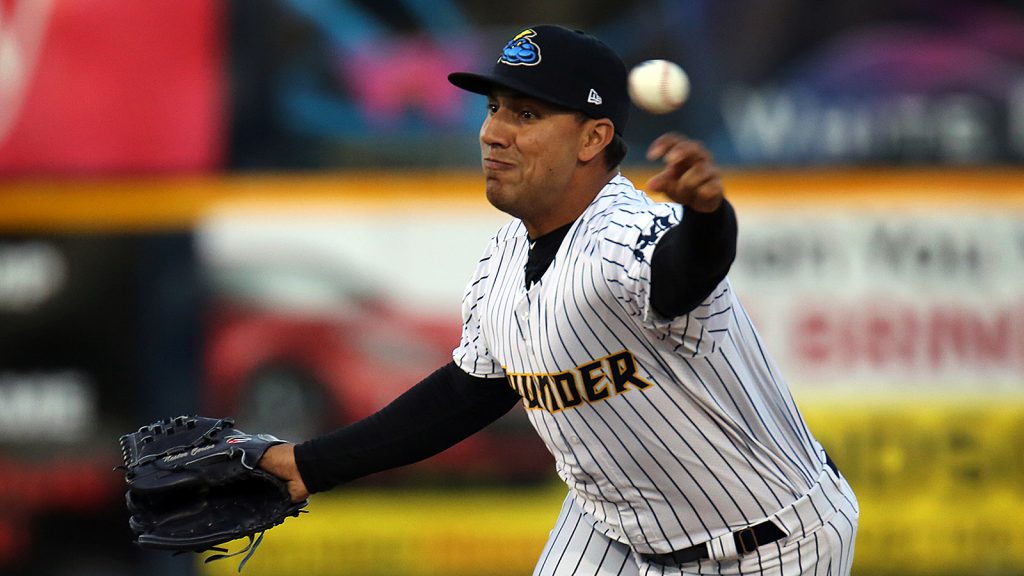 “He pitched great,” Mitchell said of his starter. “You know, he pitches: he moves the ball in and out, he changes speeds, and he’s sneaky. He just kept them off balance really good. He’s around the zone, he mixes his pitches well, they don’t know what’s coming. They start to guess.”

“That was his last hitter in the fifth, so we were happy to see him get him out so that he could get the win.”

The home run that Cortes surrendered came after he was in the dugout for 30 minutes following the big bottom of the second inning the Thunder had.

“We score seven runs, I think it’s natural for pitchers to have a little bit of a letdown in concentration,” Mitchell said. “And I think he started off a little bit that way, but then he started pitching like it was 0-0 – which you should be trying to do anyway.

“You know, you sit for a while and we score seven runs, but it’s not over yet. It was only the second inning. So, I was hoping to score more runs after that.”

In his second at-bat of the inning, Thunder center fielder Rashad Crawford added an RBI flyout to centerfield in the second that drove in Mike Ford to complete the scoring for Trenton.

“When we had that big inning, me and pitching coach Jose Rosado came into the batting cage and threw some because it was such a long down time for me that I had to get my arm going, and break a sweat so I don’t lose the rhythm of the game,” said Cortes, who made his first start since June 1. “But I knew that guy in the fifth was my last batter so I’m happy I got him. There were five innings and I worked hard for them so it was a good five innings.”

Bowie’s third baseman Stevie Wilkerson knocked in the Baysox’s other two runs with a double in the eighth inning.

“My fastball was good today,” said Cortes who hit 94 mph on the radar gun with his fastball and got as low as 68 mph with his curveball. “My fastball was definitely my best pitch today, I think I commanded it really well and my second pitch was a change-up – it was really working for me today.”

“It would have been nice to score as we went along, but sometimes I feel like we can score seven and then get a little complacent,” Mitchell said. “We want to keep adding on as much as possible.

“But, pitching has been our staple really — throughout last year and obviously this year too.”

The Thunder will now look to go for the sweep of Bowie on Sunday. Southpaw Josh Rogers (2-0) will take the hill for Trenton, and he will be countered by Brandon Barker (3-1) who will be looking to snap the Baysox’s current four-game skid. First pitch at ARM & HAMMER Park is set for 1 p.m.