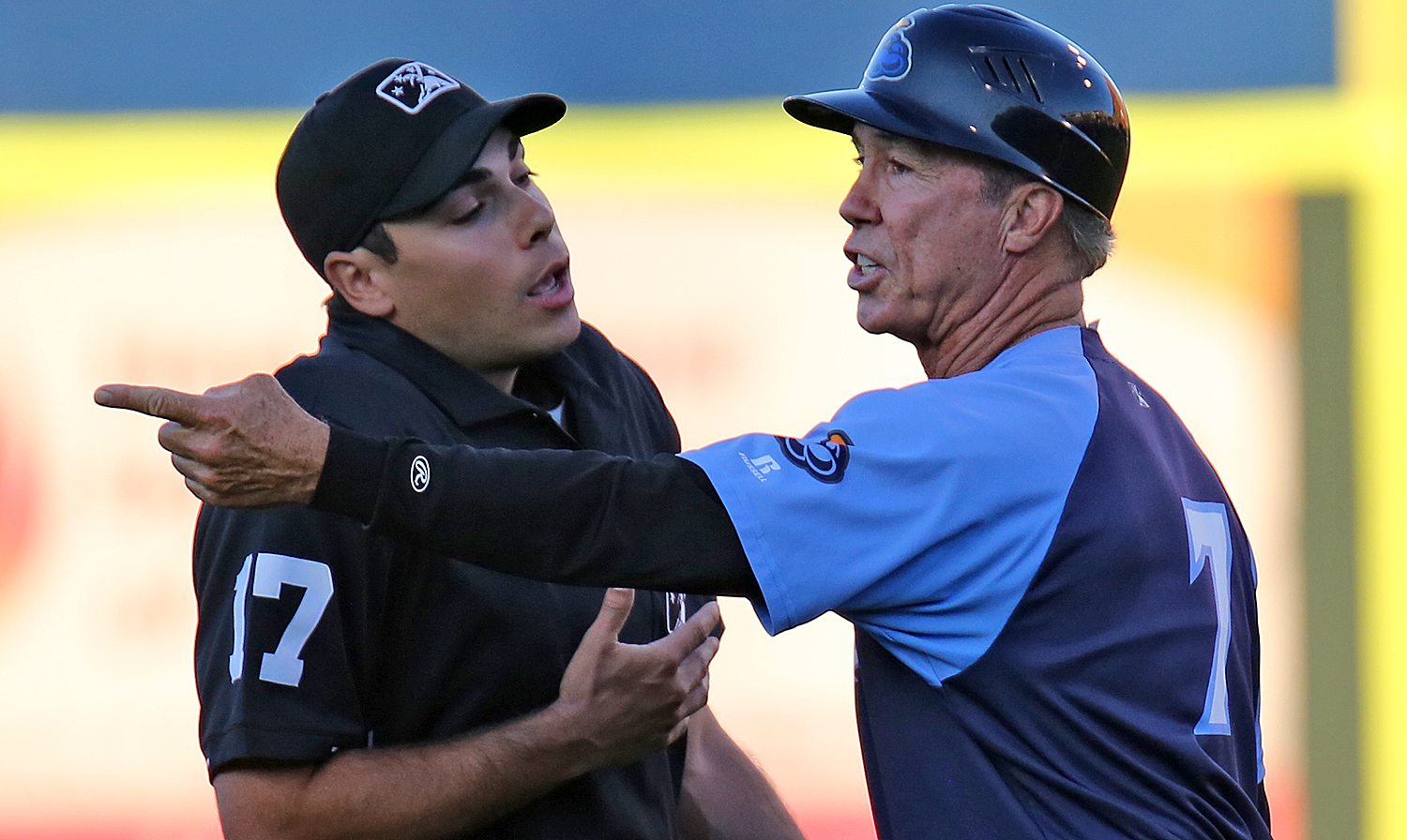 Trenton Thunder Manager Bobby Mitchell argues unsuccessfully with home plate umpire Mike Wiseman after Mark Payton lined out with Mike Ford doubled off first base to end the top of the second inning against the Portland Sea Dogs at Hadlock Field in Portland, Maine on Tuesday, July 26, 2016. Photo by Martin Griff

BOX SCORE (7/26)
PORTLAND, ME – A season-high eight runs in the 6th inning was just the tip of the iceberg in the Trenton Thunder’s 15-4 win over the Portland Sea Dogs Tuesday night.

Before 6,364 fans at Hadlock Field, the Thunder trailed the Sea Dogs 1-0 entering the 5th inning when starter Mike McCarthy handed the ball off to his bullpen. Trenton proceeded to score 15 runs in five innings off Portland relievers in a season-best offensive performance. On a season-high 18 hits and a season-high-matching nine walks plus a hit-by-pitch, Trenton’s offense exploded for 28 baserunners on the night.

Each Thunder batter had a hit for the 5th time in 6 games. As part of the eight-run 6th inning, Dante Bichette Jr. mashed an opposite-field two-run homer and Cito Culver chipped-in a two-run single and a two-run double. The multi-hit inning was the first time since April 2013 when Walter Ibarra collected two hits in a game against the New Hampshire Fisher Cats.

Starting pitcher Chance Adams allowed one hit through the first five innings before allowing a pair of runs on a pair of hits while recording one out in the 6th. He finished with the victory, improving to 6-0, 2.38 ERA with the Thunder and an unblemished 11-0 overall this season.

Trenton and Portland return to action Wednesday at noon for the rubbergame of the three-game series. Trenton has gone 4-2 on the roadtrip as they send LHP Daniel Camarena (7-3, 2.68) to the mound against Portland’s RHP Teddy Stankiewicz (3-7, 5.04). Pregame coverage is set for 11:45 a.m. on 91.3 FM or online at www.trentonthunder.com.