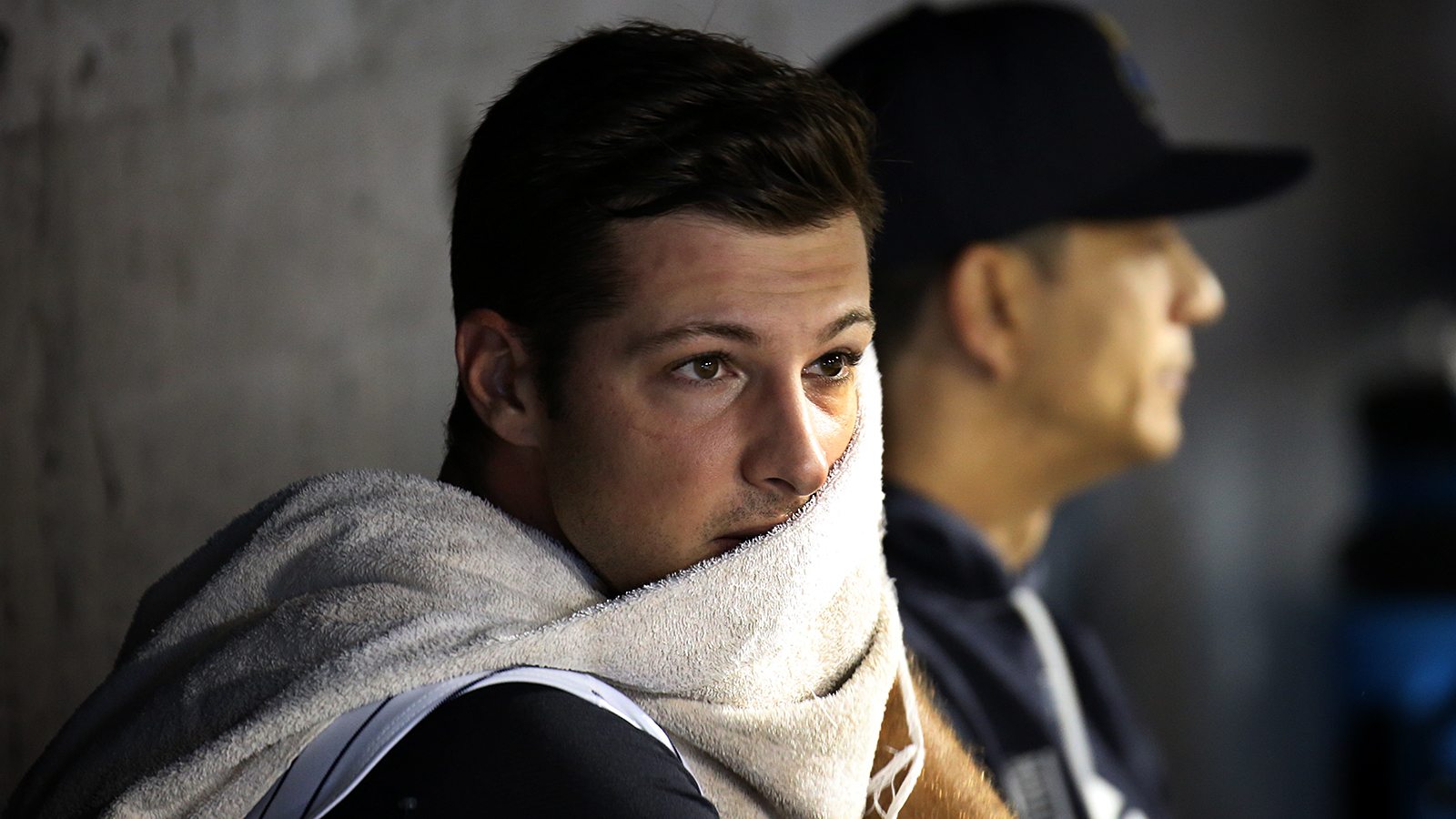 Dillon McNamara in the dugout after making his first appearance for the Trenton Thunder this season, working in relief against the Hartford Yard Goats in Trenton on Wednesday, June 07, 2017. (Martin Griff)

TRENTON — Boy, that was ugly.

In a game that contained 11 walks, three wild pitches, two balks, and 17 hits; the Thunder dropped a 7-3 decision to the Hartford Yard Goats at ARM & HAMMER Park in front of 3,478 fans on Wednesday night.

After jumping out to a 2-0 lead early, Trenton’s offense was shut down for the majority of the rest of the way as the Yard Goats (28-29) rallied for seven straight runs.

After pitching three scoreless innings, Thunder starter Justus Sheffield (4-4) struggled. Sheffield finished the night with six innings pitched, where he gave up six hits and five runs (all earned) while walking four — and he accounted for two wild pitches. 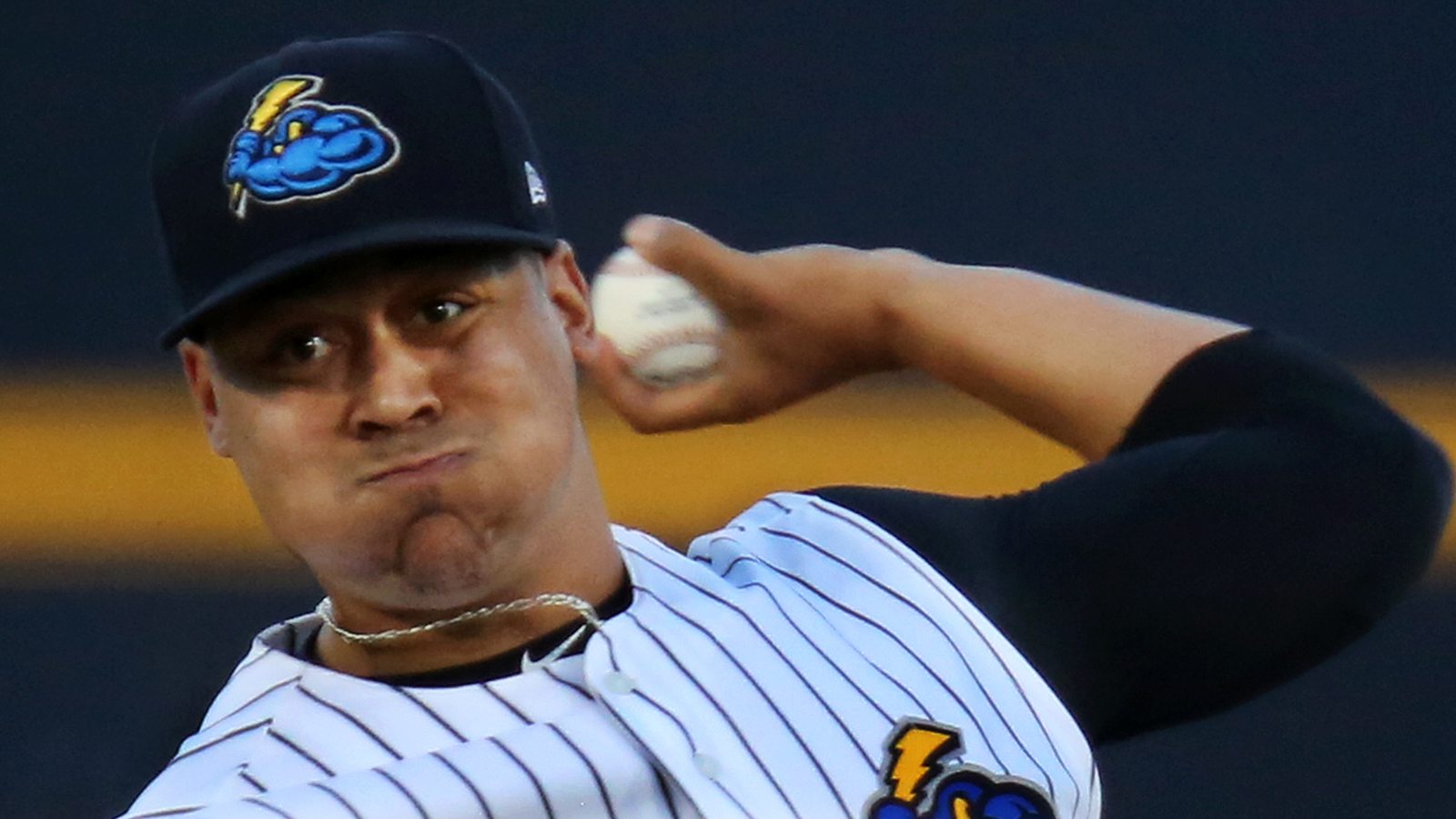 “We scored two runs, on homers, and then the next half inning is very important to keep momentum,” said Thunder manager Bobby Mitchell. “I thought Sheffield struggled with his command. Gave up two walks, threw two wild pitches, then two hits and the next thing you know it’s tied. You know, it takes a lot of momentum away, and I think that’s what happened.”

The Thunder (36-21) missed a great chance to get the scoring started in the bottom of the second inning. Hartford starter Luis Niebla issued three walks to load the bases, and with one out Trenton leadoff hitter Thairo Estrada came to the plate. But Estrada chopped into a 4-6-3 twin killing to end the inning and the rally.

“That was huge,” Mitchell said. “(Niebla) struggled, I think he was one batter away from getting pulled because they had the bullpen warming up, and he was having trouble throwing strikes. And, if we can score at least one there, who knows what happens after that.”

Still, Sheffield quickly took care of the Yard Goats in the top of the third, and in the bottom of the inning, the Thunder struck. Designated hitter Jake Cave led-off the inning, and on the 10th pitch of his at-bat, he sent a blast over the wall in left-center field to put Trenton up 1-0.

Two batters later, first baseman Jake Cave deposited a 3-2 pitch well beyond the short wall in right field that appeared to land in the Delaware River. 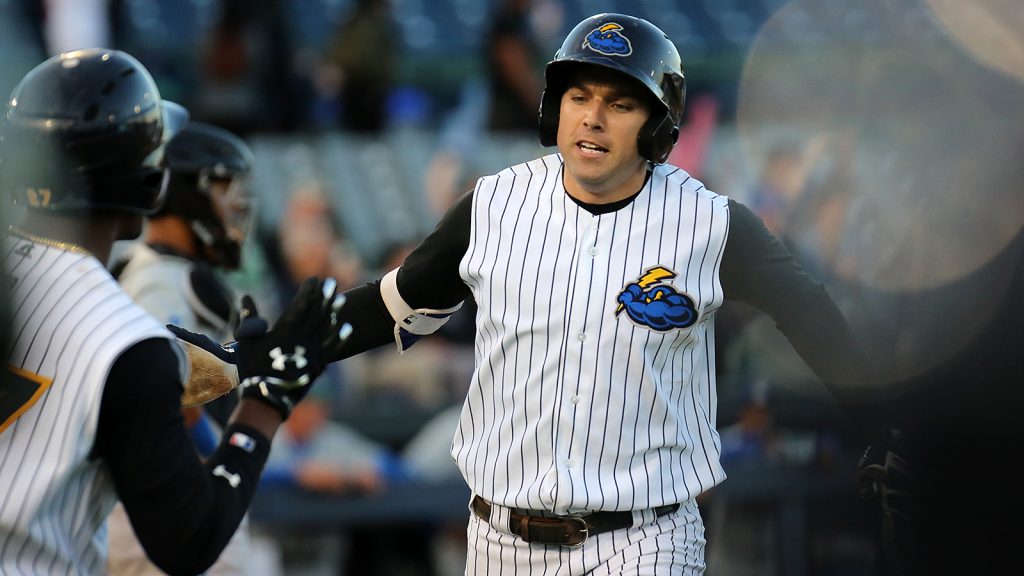 Trenton Thunder’s Jake Cave is welcomed across the plate after homering to left center field in the third inning against the Hartford Yard Goats in Trenton on Wednesday, June 07, 2017. (Martin Griff)

However, the lead would not stick. Sheffield got into trouble in the top of the fourth with two walks and two wild pitches, and he could not work out of it. Hartford got two runners across the plate, and the game was knotted at two heading into the bottom of the inning.

“I think that shutdown inning was huge there,” Mitchell said. “It took the momentum out of our hands and put it into theirs. I think those are huge. And then when they scored, we didn’t score.”

Trenton’s bats did quickly go quiet after that. The Thunder went down in order for the next four innings (14 total batters retired in a row).

“Aside from the two homers, we didn’t do much offensively,” Mitchell said. “I mean, we only got three hits through seven innings.” 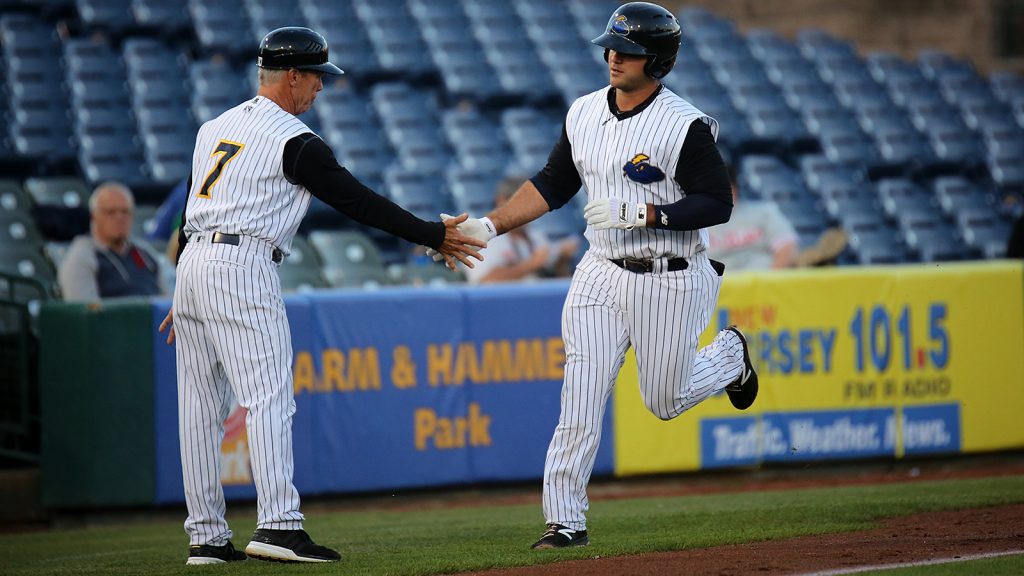 The game was ultimately decided in the top of the sixth inning off the bat of Hartford’s Josh Fuentes. The Yard Goats’ No. 7 hitter hit a three-run home run to give Hartford their first lead of the game at 5-2 – a lead that would last the remainder of the way.

“I’m disappointed because I think Sheff has the ability, obviously,” Mitchell said. “But right now, he’s very inconsistent. He’s struggling with that command, and tonight the wild pitches – they weren’t even close. He didn’t have a feel for his slider.

“But, you learn by it, and hopefully he gets better.”

The Yard Goats added a run in the seventh and another in the eighth off of a balk. 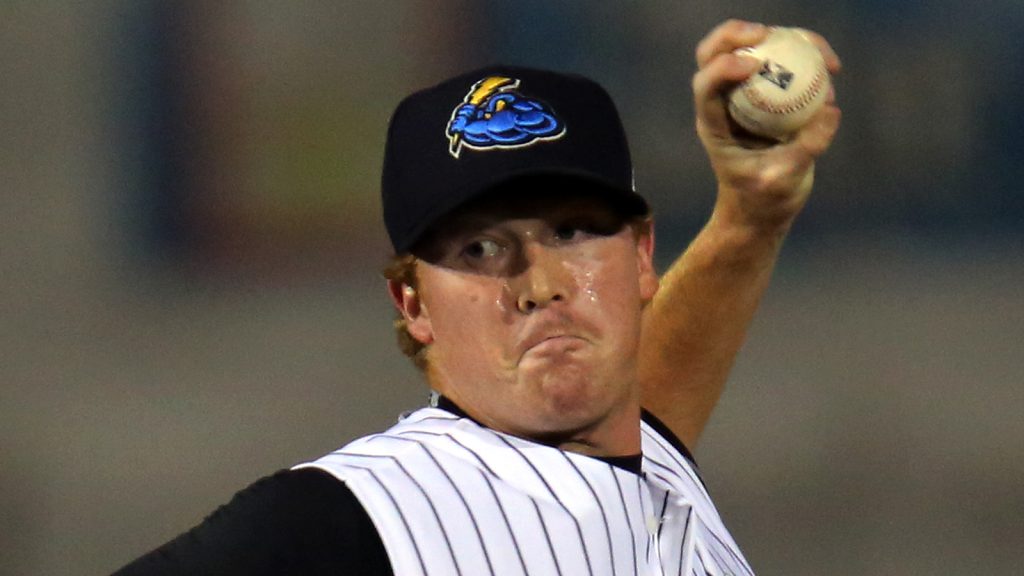 Ford collected his second RBI of the night with a single in the eight to complete Trenton’s scoring.

The Thunder and the Yard Goats will square off in the rubber match of this series on Thursday at ARM & HAMMER Park. First pitch is scheduled for 7 p.m. and will be followed by a fireworks show.

“You have to just (turn the page),” Mitchell said. “We hope we recover from it and come back out tomorrow and play well.”

Thunder third baseman Miguel Andujar extended his hitting streak to 15 games with a double in the first inning, and shortstop Thairo Estrada has now reached base safely in 21 straight games with a single in the eighth inning.