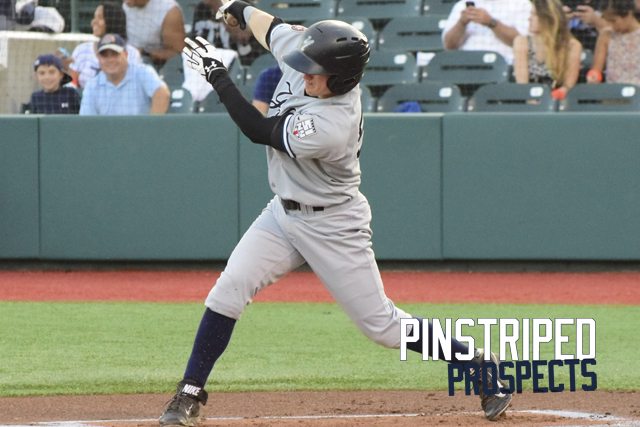 RICHMOND, VA – The Trenton Thunder were shut out for the second consecutive ballgame, and lost their fifth straight game, 4-0 to the Richmond Flying Squirrels.

Thunder starter Eric Ruth allowed a first inning run to the Squirrels after they began the inning with consecutive doubles, resulting in Kelby Tomlinson scoring with Mac Williamson driving him in. Ruth settled in and did not allow a run over the ensuing three innings before the Squirrels struck for two more runs in the fifth inning for a 3-0 lead. The only run coming off the bullpen came in the 7th inning when Richmond scored off Cesar Vargas before Conor Mullee tossed a scoreless 1.1 innings to keep the Squirrels bats at-bay.

Offensively, the Thunder notched seven hits in the game but could not muster any runs. The Thunder have now been held off the scoreboard for 22 innings dating back to Sunday’s loss in Bowie. The one batter with multiple hits in the game was Devyn Bulasky who finished 2-for-3, including a triple that clattered off the right field wall in his first Double-A at-bat.

The fifth consecutive loss is a season-long streak for the Thunder, breaking two previous streaks of having lost four-in-a-row earlier this season. Additionally, the Thunder have gone 2-9 in their last 11 games after having won 10 of their previous 11 games.

The Thunder continue their four-game series against the Flying Squirrels Wednesday at The Diamond with a 6:35 p.m. scheduled first pitch. Trenton throws RHP Brady Lail (3-3, 2.62) against RHP Tyler Beede (1-1, 3.06) which features pre-game coverage beginning at 6:20 p.m. on 91.3 FM WTSR and online at www.trentonthunder.com