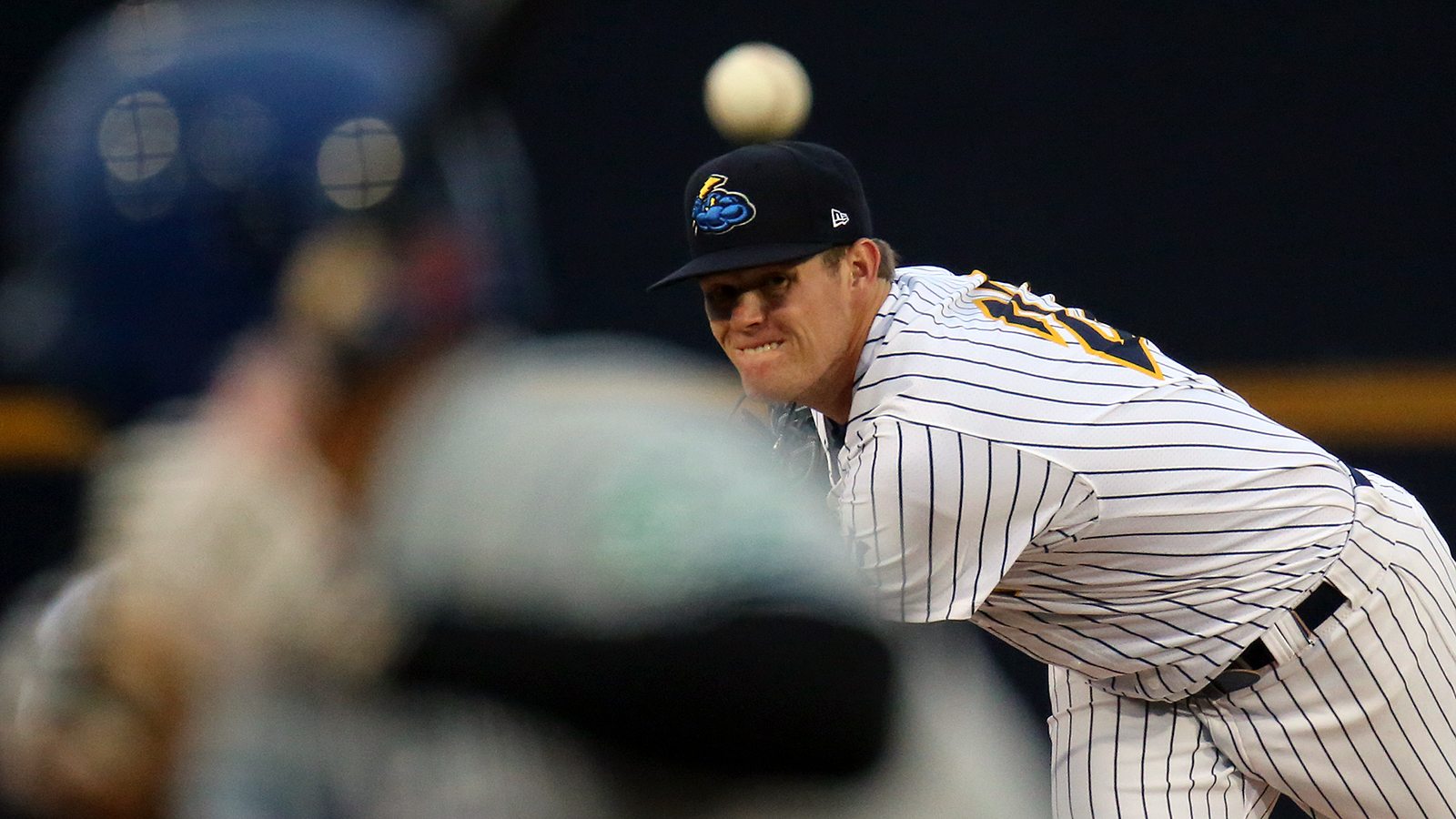 TRENTON – After dropping two of three games to the Richmond Flying Squirrels in a trio of one-run affairs over the weekend, the Thunder returned home on Tuesday and welcomed in the Hartford Yard Goats to ARM & HAMMER Park for the opener of a three game set.

Making just his third Double-A start, southpaw Josh Rogers hurled three shutout frames before the Thunder offense would stake him to a lead that they would not relinquish in the bottom half of the third frame. Hartford left-hander Sam Howard surrendered a one out single to shortstop Thairo Estrada before issuing a walk to left fielder Jake Cave that set-up an RBI single by third baseman Miguel Andujar, who extended his hitting streak to 14-games with a first inning single. 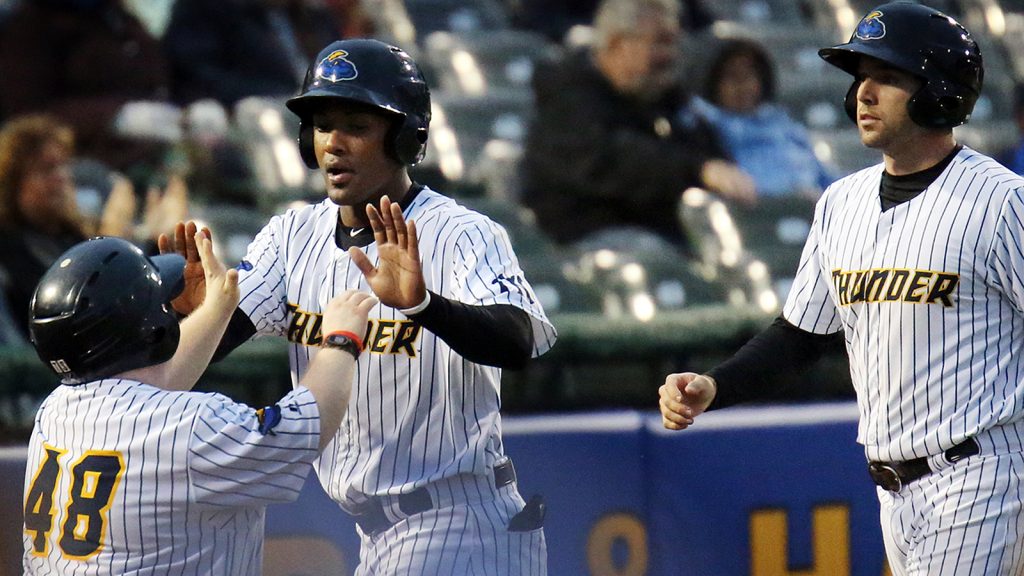 Trenton Thunder batboy Tommy Smith greets Miguel Andujar and Jake Cave after they scored in the third inning against the Hartford Yard Goats in Trenton on Tuesday, June 06, 2017. (Martin Griff)

Following a two-out walk drawn by right fielder Zack Zehner to load the bases, first baseman Billy Fleming snuck in a bloop single just over the outstretched glove of second baseman Juan Ciriaco to plate two runs to extend the Thunder lead to 3-0.

Harford immediately answered back with two runs of their own in the top of the fourth on solo homers from designated hitter Ashley Graeter and catcher Dom Nunez to put the Yard Goats within one run at 3-2. 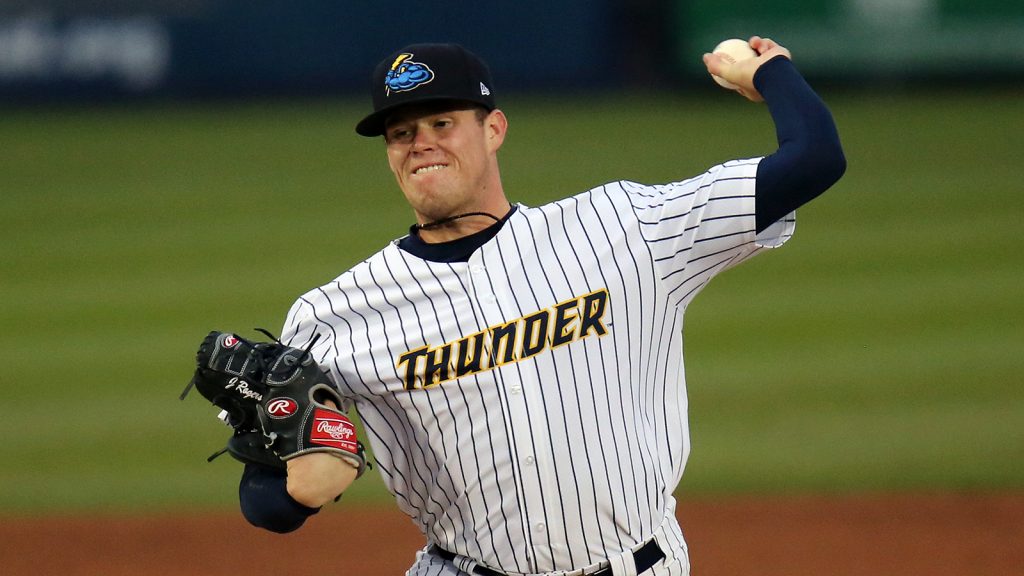 Rogers retired the first two batters in the sixth and appeared poised to cruise through the frame. After issuing two walks and hitting a batter to load the bases, Manager Bobby Mitchell stormed out of the dugout to pull Rogers in favor of fellow southpaw Nester Cortes, who is slated to start for Trenton on Thursday.

“I thought he pitched really well,” said Mitchell in regards to Rogers. “The thing that I like about him is that the defense stays on their toes because he works fast. He made a couple of mistakes and they made him pay for it after we scored three runs.”

Cortes threw one pitch to the right-hander Ciriaco and he flew out to centerfielder Rashad Crawford to evade the Hartford threat. Rogers exited having allowed two earned runs on five hits with two walks and seven strike outs over his 90-pitch effort. 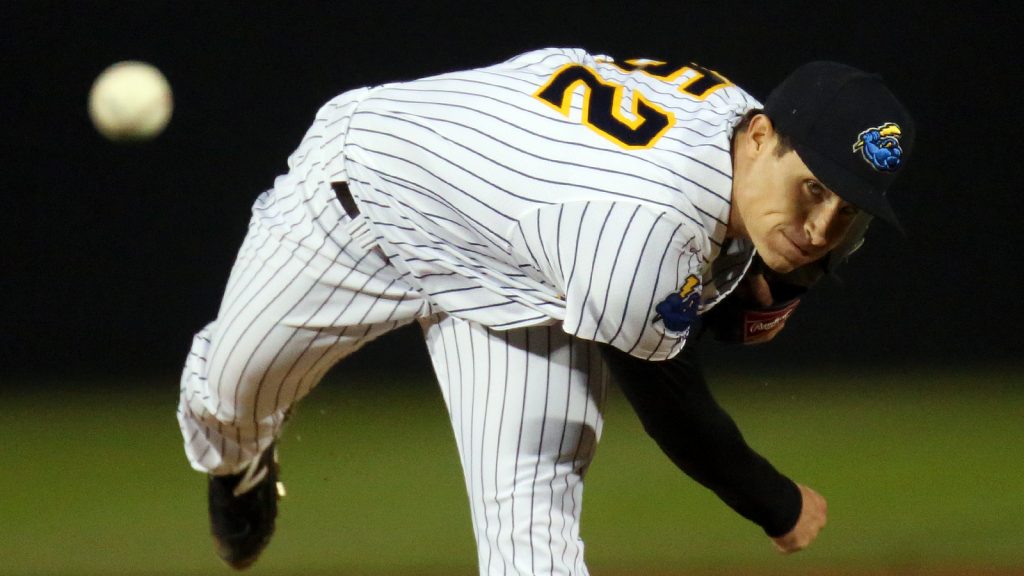 Rehabbing Yankees reliever Nick Rumbelow, making his way back from Tommy John Surgery, tossed two scoreless frames with four strikeouts in his second game with Trenton. The right-hander tossed 36 pitches and sat 93 – 94 MPH with his fastball.

“The one thing about him is that he is just back into pitching form and that he is healthy,” said Mitchell. “He felt fine today; his stuff is really good , he throws hard.”

An RBI double by Fleming and a two-run double by Estrada plated three insurance runs for Trenton in the eighth to pad their lead at 6-2. Right-hander Colten Brewer allowed an unearned run in the ninth inning and the Thunder held on for the 6-3 victory to improve their league best record to 36-20.