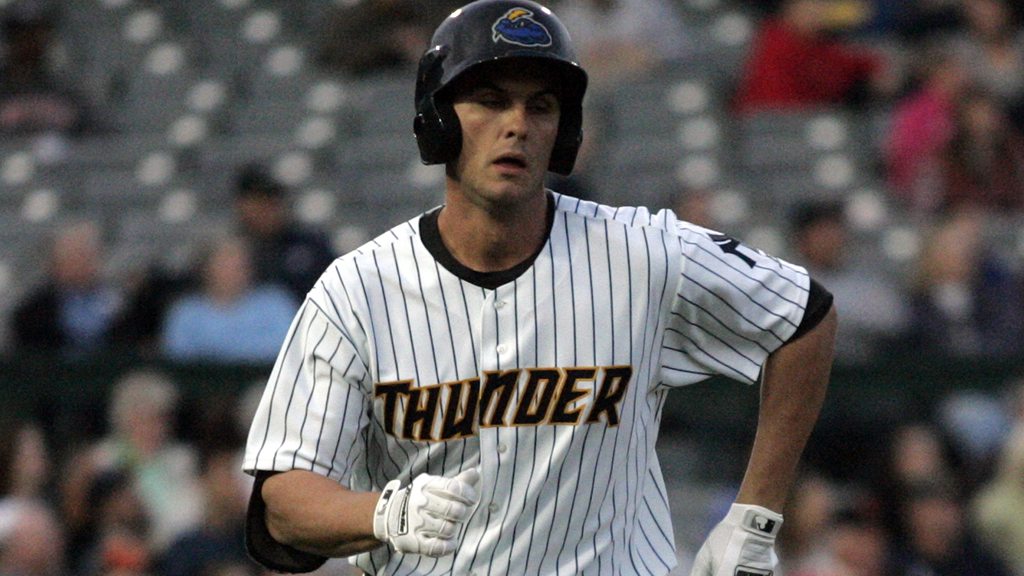 PORTLAND, ME – Gary Sanchez hit a game-tying two-run home run in the top of the ninth inning and Dan Fiorito’s run-scoring double scored Taylor Dugas to complete a comeback victory for the Thunder, 9-8, over the Portland Sea Dogs on Wednesday afternoon at Hadlock Field.

Working against Madison Younginer, Eric Jagielo (3-for-4, 2 R, BB) led off the top of the ninth inning with his league-leading 19th extra base hit of the season. Sanchez followed him with a line drive home run over the Maine Monster in left to tie the game at eight. With one out in the inning, Taylor Dugas reached with a single to left and after Jose Rosario popped out, Dan Fiorito drove in Dugas with a double to right take the 9-8 lead.

In the bottom of the ninth, the Sea Dogs loaded the bases with nobody out against Mark Montgomery with a walk, a bloop base hit and an error by 1B Francisco Arcia. Montgomery was able to pitch out of the jam by striking out Jantzen Witte and Oscar Tejeda, before getting Keury De La Cruz to fly out to right field to complete his fifth save of the season.

The teams traded the lead in the early innings when Dan Fiorito (3-for-5, 3 RBI) doubled home a pair to take a 4-3 lead for the Thunder in the fourth inning. However, the Sea Dogs grabbed a 7-3 advantage with four runs of their own in the bottom of the inning.

The Thunder chipped away at the deficit with single runs in the sixth and eighth innings and trailed 8-6 when Sanchez tied the game with his third home run of the season in the top of the ninth.

With the victory, the Thunder earned their second victory of the season when trailing after eight innings. In 2014, they did not win a game that they trailed after eight.

Over the final four games of the road trip, the Thunder bullpen held opponents to just two earned runs in 21.1 innings pitched (0.84 ERA).

Your Thunder will return to ARM & HAMMER Park on Thursday night at 7:00pm to begin a four-game series with the Harrisburg Senators (Washington Nationals). It’s Thirsty Thursday with a $2 beers available until the middle of the fifth inning and after the game, all fans can enjoy Post-Game Fireworks set to music from 80’s Hair Bands. Tickets can be ordered online at Trentonthunder.com/tickets or by phone at 609-394-3300.