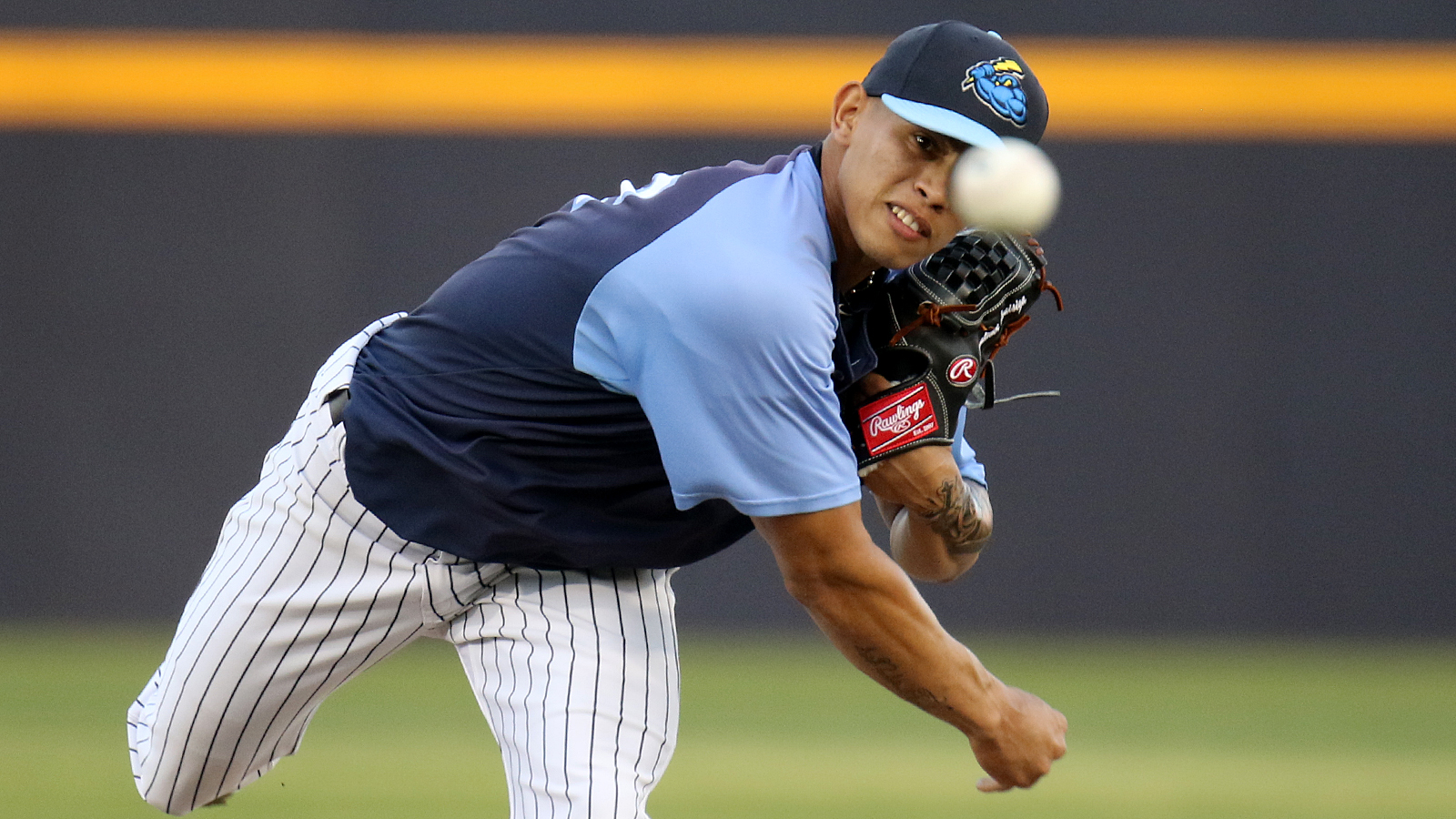 Jonathan Loaisiga made his return to the Trenton rotation on Tuesday. He gave up one run on five hits, struck out two, and walked one in three innings of work. (Photo by Martin Griff)

TRENTON – The Thunder received a quality start from right-hander Jonathan Loaisiga in his Double-A debut and a timely two-run homer by second baseman Bruce Caldwell in the sixth inning propelled a 3-1 series opening victory over the Harrisburg Senators on Thursday night at ARM & HAMMER Park.

“I am so glad that I got this opportunity,” said Loaisiga through translator Raul Dominguez. “I feel so great today.” 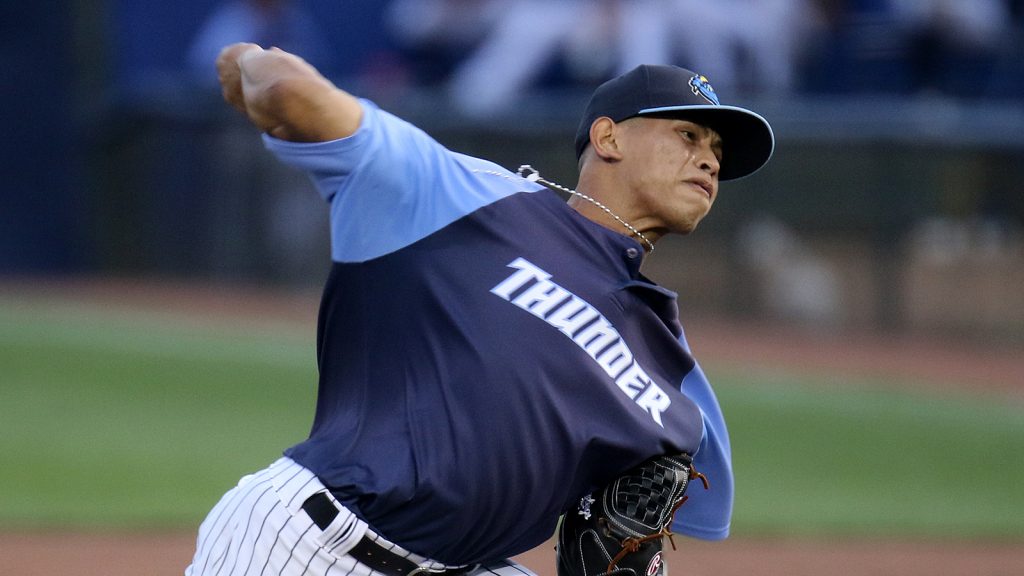 The Thunder drew first blood on a two-out RBI single by first baseman Chris Gittens that plated centerfielder Rashad Crawford, who had led off the bottom half of the first with a single. Crawford finished the contest by going 3-for-4.

Harrisburg appeared poised for a big inning against Loaisiga in the third after shortstop Oswaldo Abreu led off the frame with a well-struck double to left field. With a runner in scoring position and just one out, right fielder Brian Johnson singled into centerfield, but the relay throw from second baseman Bruce Caldwell to catcher Chance Numata beat Abreu to the plate and allowed Loaisiga to escape the inning unscathed.

Loaisiga, who had dominated the Florida State League to the tune of a 3-0 record and 1.45 ERA in four starts, was strong in his first taste of Eastern League action. The 23-year old right-hander, who was added to the Yankees 40-man roster this past winter, tossed five innings and allowed just a fourth inning RBI triple to third baseman Kelvin Gutierrez as the only blemish to his line. He allowed six hits and walked two while striking out four in his 89-pitch effort. 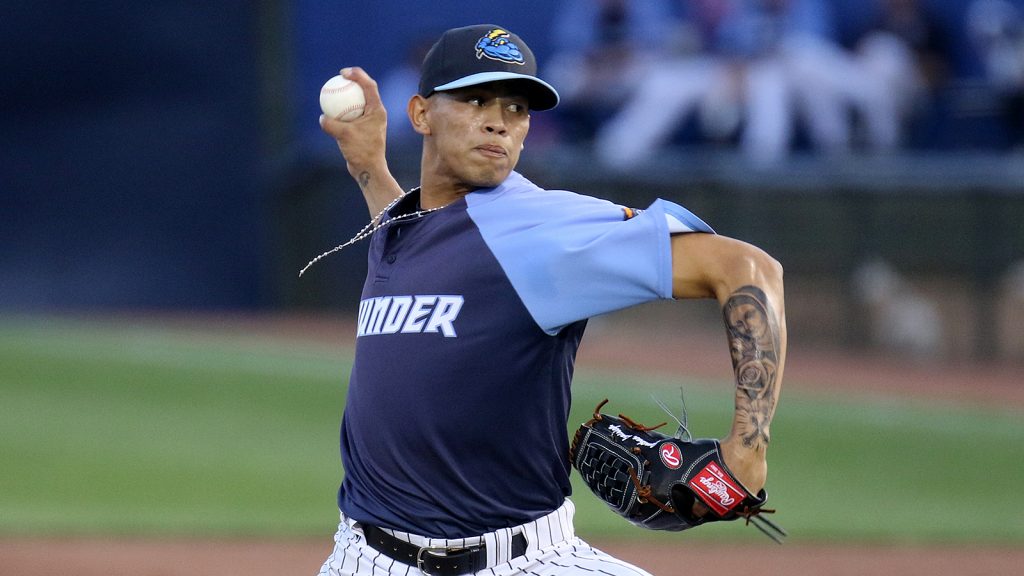 “I was not expecting the promotion because everything that they do with me is step-by-step,” said Loaisiga. “I can see the difference up here, I see a lot of hitters don’t chase many pitches and they have very good strike zone discipline.”

“I couldn’t be happier,” said Thunder Manager Jay Bell in regards to the effort of Loaisiga. “He pitched really, really well; I was very impressed. He pounded the strike zone and threw all of his pitches for strikes and did a fantastic job. For him to come up and do what he did was extraordinary.”

After Gosuke Katoh smacked a one-out double in the sixth inning, Caldwell smashed a 1-1 offering from Senators starter Brady Dragmire to give the Thunder a 3-1 advantage. 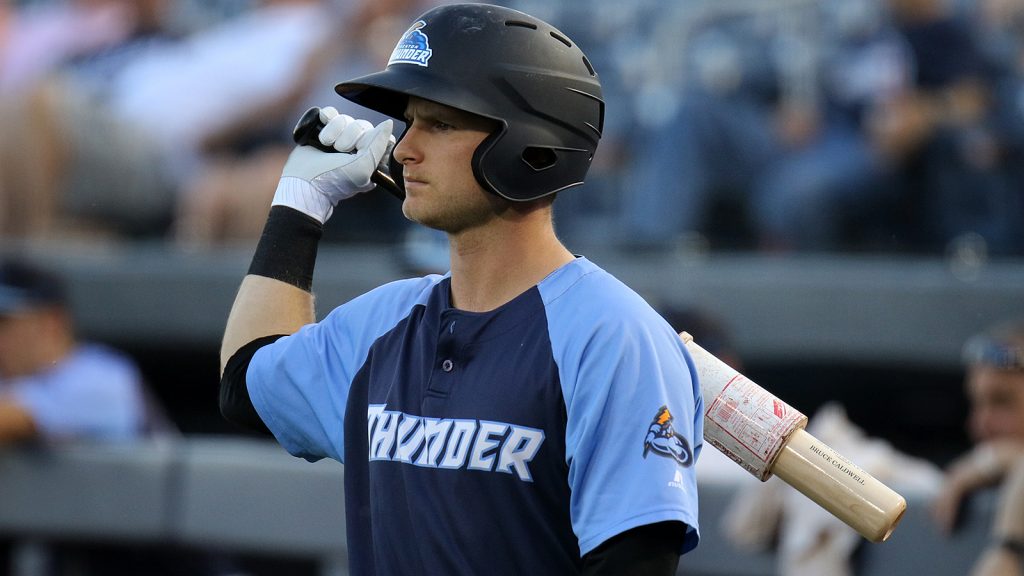 Trenton Thunder’s Bruce Caldwell on deck against the Harrisburg Senators in Trenton on Thursday, May 3, 2018. (Photo by Martin Griff)

Southpaw Stephen Tarpley turned in three hitless innings of relief, recording all nine outs via gound ball to pick up the victory. Right-hander Andrew Schwaab tossed a scoreless ninth to record his first save of the season to preserve the 3-1 win and the eighth win for Trenton in their last 11 games.

“He [Tarpley] is throwing better now than he did last year, and he threw really well last year,” admitted Bell. “The numbers dictated that he threw great. He wasn’t throwing nearly as good as he is throwing now. He has got his velocity back; the movement on his fastball is extraordinary and he is throwing the breaking balls to both sides of the plate really, really well. That was a major momentum booster for him.”

Trenton will look to take game two of their four-game series with the Senators on Friday night when they send Eastern League wins (4) and ERA (0.87) leader Erik Swanson to the bump against Jefry Rodriguez of Harrisburg.