Thunder Have Trouble With The Curve in ELCS Opener 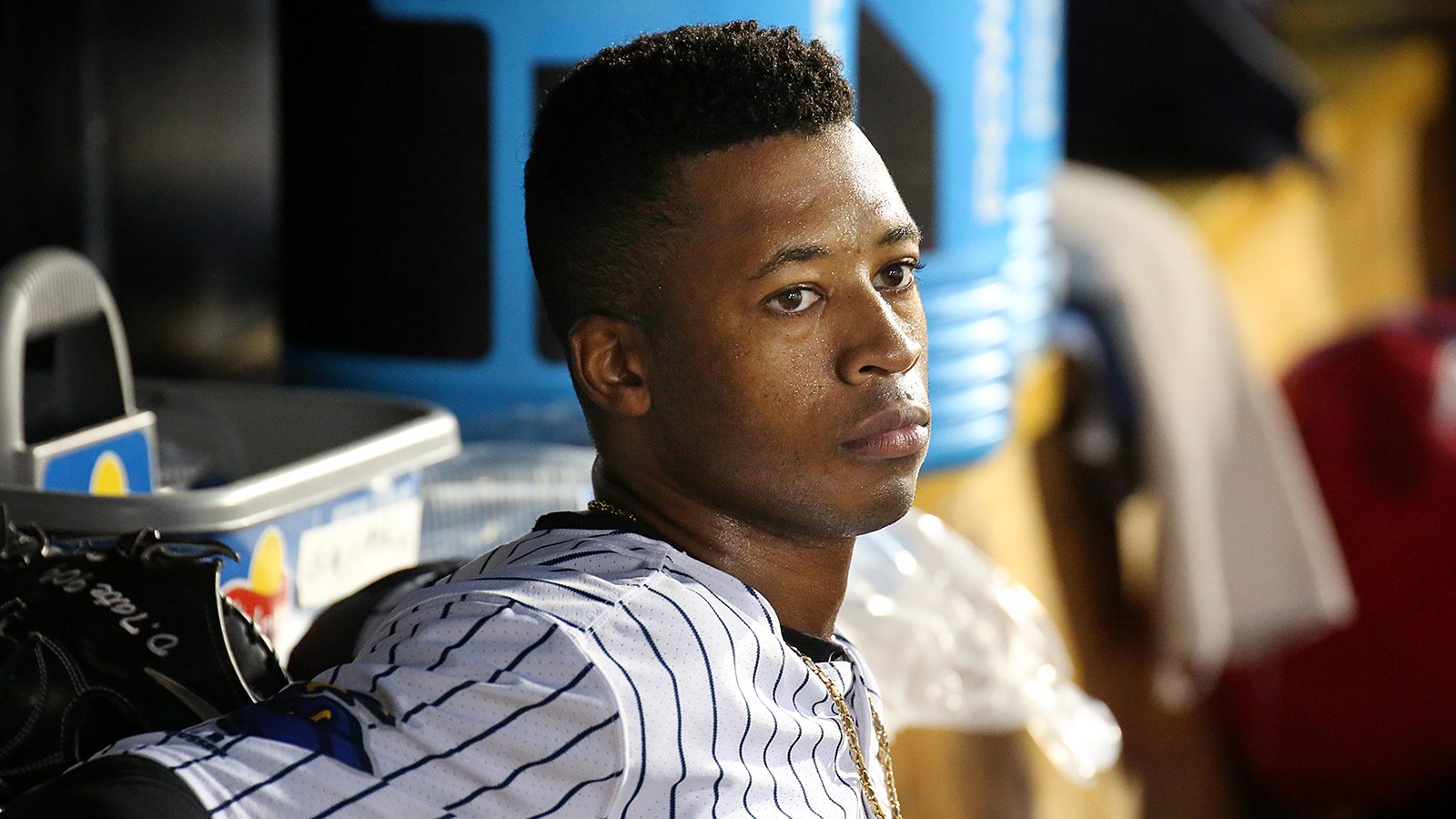 TRENTON- Altoona left-hander Brandon Waddell tossed six shutout innings and the Thunder squandered multiple scoring opportunities as they dropped the opener of the best-of-five Eastern League championship series to the Curve by a score of 2-1 at ARM & HAMMER Park on Tuesday night.

“They were 1-for-8 with runners in scoring position and we were 2-for-10,” said Thunder Manager Bobby Mitchell. “We left nine and and they left eight, so it was not a big offensive game… We just didn’t hit.”

Both Waddell and Thunder starter Dillon Tate matched zeroes over the first four innings before Altoona drew first blood in the top of the fifth. An RBI single by second baseman Mitchell Tolman capped off three consecutive two-out hits put the Curve out in front with a 1-0 advantage. 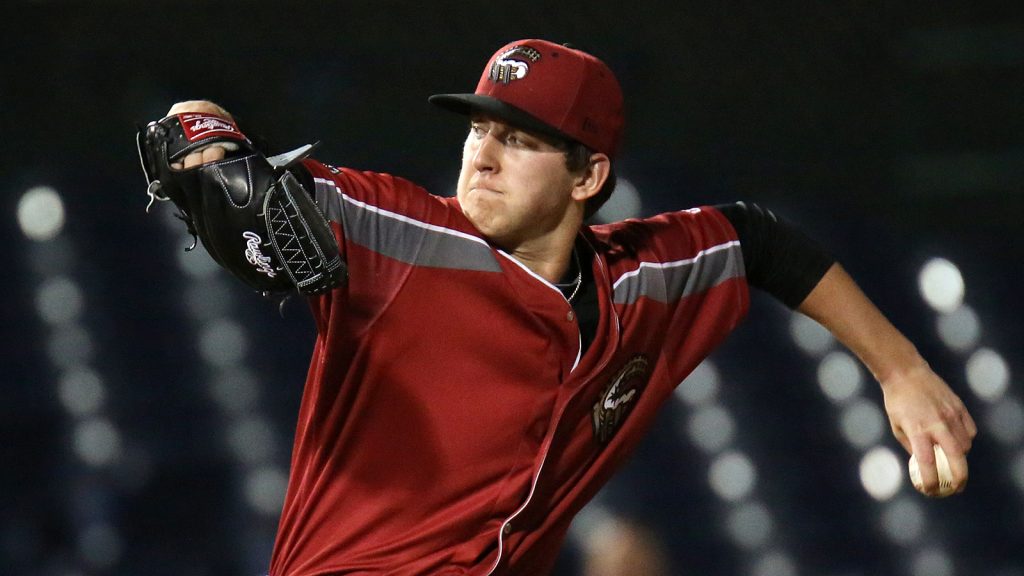 The Thunder had a glaring opportunity to even the score in the bottom half of the frame, but could not cash in. Center fielder Rashad Crawford legged out a hustle double to lead off the inning and was quickly moved over to third base on a well-executed bunt by catcher Francisco Diaz. With the tying runner in scoring position and just one out, right fielder Jeff Hendrix grounded out softly to first base and Waddell was able to fan designated hitter Nick Solak to extinguish the threat.

Tate was able back with a strong effort on Tuesday after taking the loss in what was a rough outing for him in the opener of the ELDS against Binghamton last Wednesday night. The 23-year old right-hander tossed six innings and yielded the lone fifth inning run on four hits before being pulled at the 91-pitch mark in favor of reliever Jose Mesa Jr. 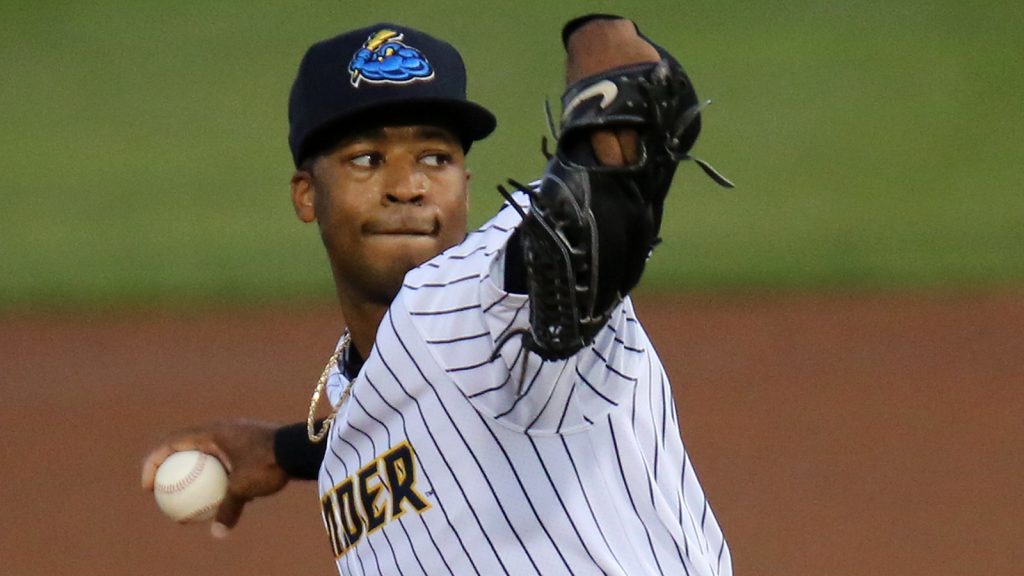 Thunder starter Dillon Tate works against the Altoona Curve during game one of the Eastern League Championship Series in Trenton, NJ on September 12, 2017. (Martin Griff)

“He pitched well, especially early,” said Mitchell in regards to Tate. “He was working ahead and throwing strikes; he got a little period where he would fall behind and got a little bit up in the zone, but it wasn’t his fault that we lost.”

Riding a 22 inning scoreless streak, Mesa Jr. surrendered a one out single to left fielder Jordan George and issued a walk to right fielder Michael Suchy to start the sixth inning. Following a passed ball by Diaz which allowed both runners to advance into scoring position, Mesa Jr. gave up an RBI single to center fielder Elvis Escobar to put Altoona ahead 2-0. 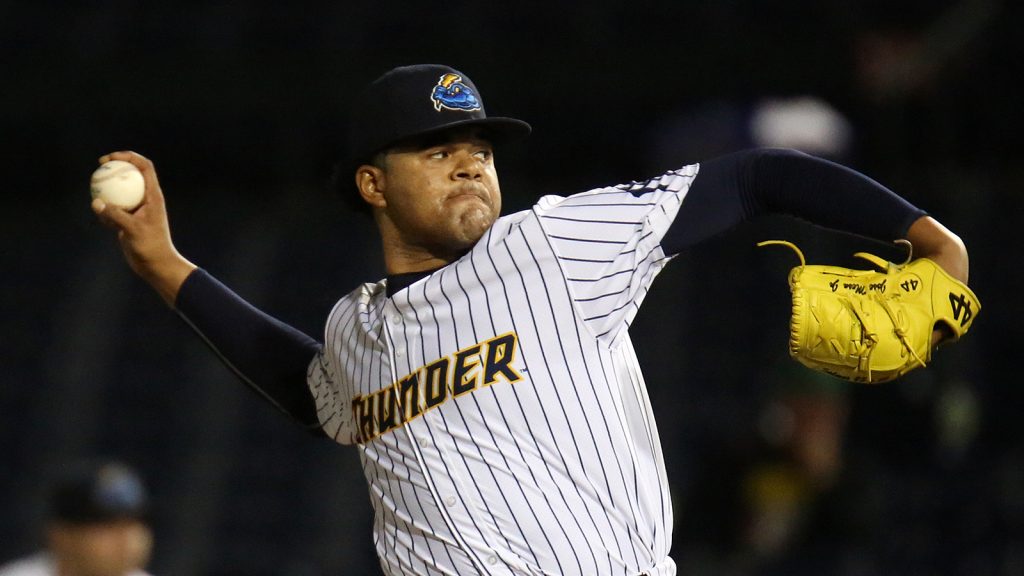 Meanwhile, Waddell cruised through six innings and allowed just five hits and struck out six batters in his 102-pitch outing. The 23-year old southpaw has now tossed 19 scoreless innings since being selected in the fifth round of the Pirates in the 2015 draft.

Mitchell added,” How many times are we going to hit the ball foul over our dugout and get the crap jammed out of us before we make an adjustment? That is what is frustrating for me, when we as a team just keep doing the same thing.”

Pinch-hitting for Diaz to lead off the eighth inning, Billy Fleming lined an opposite field single into right field before Hendrix dumped a base hit of his own to put the tying runs on base for the Thunder. A well placed sac-bunt by Solak moved both runners into scoring position to set up Thairo Estrada, who lined an infield single off of pitcher Luis Heredia‘s glove to plate a run and put Trenton within a run at 2-1. Altoona manager Michael Ryan removed Heredia and inserted Tanner Anderson into the game and he was able to retire first baseman Ryan McBroom and third baseman Dante Bichette Jr. to end the inning. 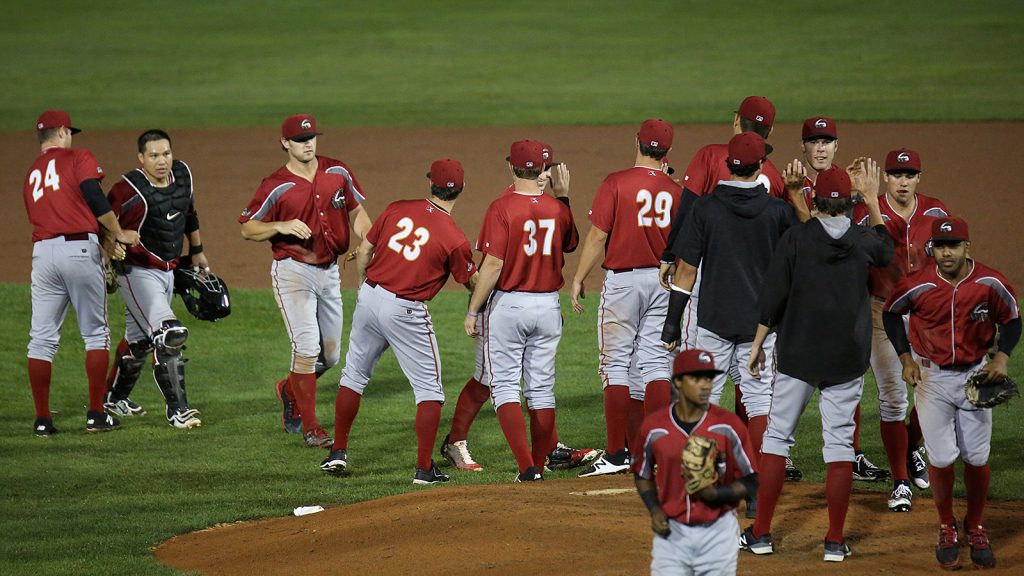 Altoona Curve players congratulate each other after defeating the Trenton Thunder 2-1 in game one of the Eastern League Championship Series in Trenton, NJ on September 12, 2017. (Martin Griff)

“You have got to take advantage of opportunities, and we didn’t do that,” said Mitchell. “You can’t not get guys in from third twice with less than two outs, especially in a game as close as this one, can’t do it.”

Anderson stayed on to pitch the bottom of the ninth for Altoona and worked around a one out double by second baseman Abiatal Avelino to pick up the save and nail down a 2-1 game one victory for the Curve.