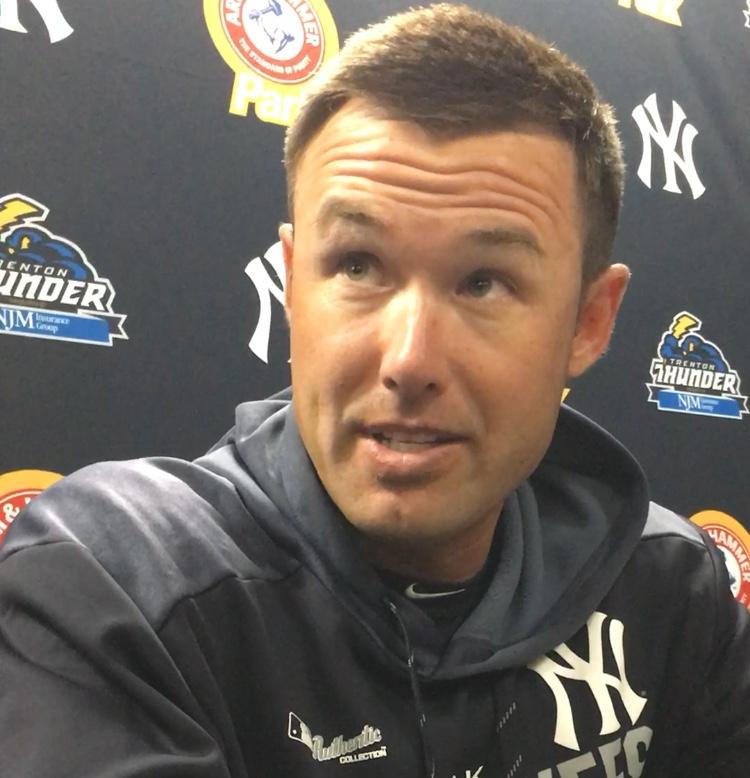 TRENTON – Entering his first season as skipper of the Thunder, 38-year old Patrick Osborn is hoping to develop the next wave of Baby Bombers while also guiding Trenton to their fourth consecutive postseason appearance, a feat that only been accomplished once in franchise history (2005-2008).

Osborn is entering his sixth season as a manager and his first in the upper levels. Having familiarity with a majority of his roster will not only help him but should ease the transition for much of the roster.

“It is unique in a way because I think everyone on the roster, except maybe one or two guys, I have managed at some point,” said Osborn. “These guys are familiar with the staff and me, and we are familiar with them. In terms of developing a culture and a team, I think you have all of the ingredients for that. As you move up levels, the person that you are dealing with as a player changes. You are going from teenagers to guys that are becoming something closer to a finished product. These guys are close; they’re close to being finished products. Here it is more like coaching the person; more of the mental side of the game or just keeping them going in a straight line and not letting them veer off of the path because they are becoming the player that they are going to be.”

Osborn added, “What they do now is going to be very similar to what they are going to end up being in terms of a major league player. The way that you deal with them becomes a little bit different, and the way that you coach them becomes a little bit different. It is more of a man-to-man relationship than a man to a kid or teenager. That dynamic is different in terms of Double-A or Triple-A, but it is something that I think I am prepared for.”

During Trenton’s three-year postseason run, the one constant that propelled them has been a pitching staff that has led the Eastern League in both ERA and strikeouts every season. That formula figures to remain the same in 2019 with a starting rotation and bullpen that is equipped with no shortage of highly touted hurlers. 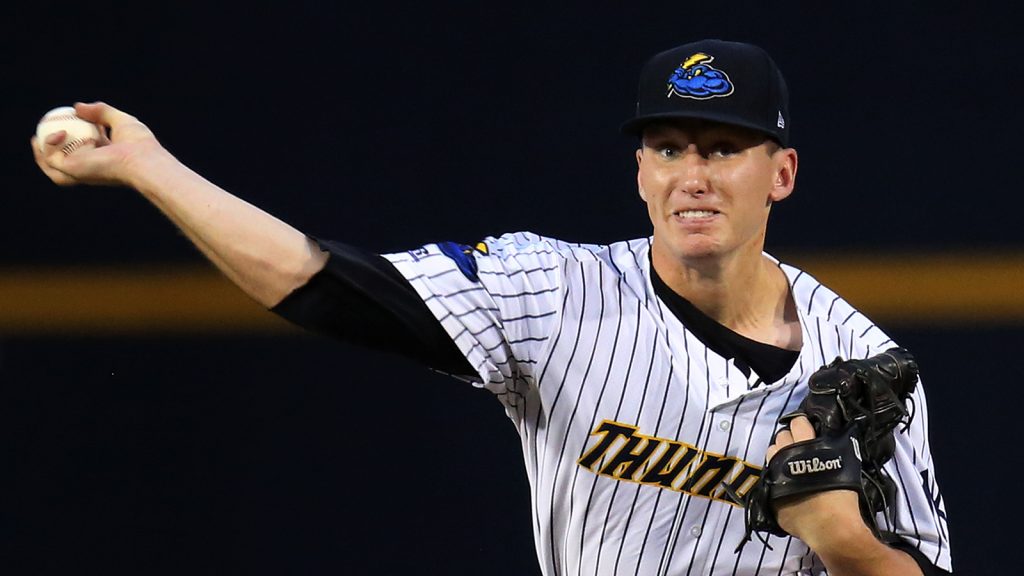 Trenton Thunder’s Trevor Stephan during a game against Hartford in Trenton on Tuesday, August 21, 2018. (Photo by Martin Griff)

Five of the Yankees top-30 prospects on our Pinstriped Prospects top-100 preseason ranking will begin the year as part of that strong Trenton pitching unit. Osborn will hand the ball to right-hander Trevor Stephan for the second straight season on opening night when the Thunder open the season on Friday night in Erie. Osborn revealed his rotation at the team’s annual media day gathering on Tuesday afternoon at ARM & HAMMER Park. Stephan will be followed by Brody Koerner, Albert Abreu, Garrett Whitlock, and Nick Nelson.

“It is pretty cool,” Stephan admitted. “I got to experience an opening day start last year in High-A, I am looking forward to trying to get that win in the first game of the season and get off to a good start.”

Stephan added, “It’s kind of good nerves; baseball is back, and that is always a good feeling. It’s the first game of the year, and you have a little extra energy, so it is fun.”

Right-hander Nick Green figures to be slotted into that rotation at some point once he is stretched out. The 24-year old Green was selected by the Arizona Diamondbacks this past December in the Rule-5 Draft but fell victim to the final cuts of spring training and was offered back to the Yankees as spring training came to a close.

One significant development that Osborn revealed on Tuesday was that right-hander Domingo Acevedo would be making a permanent transition into a relief role this season. 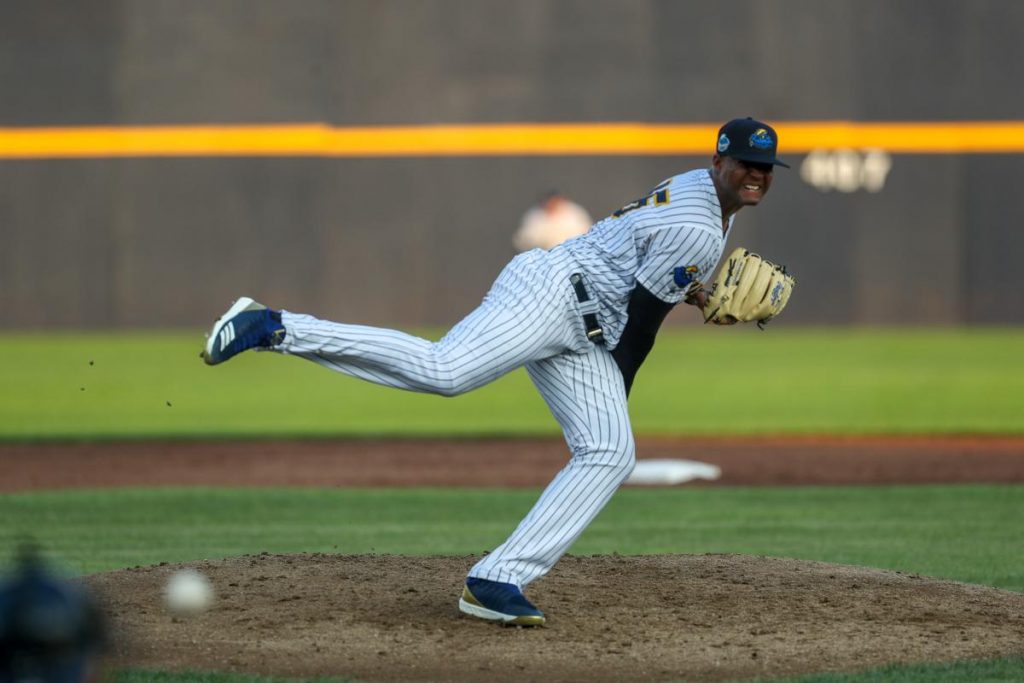 “He [Domingo] has been moved to the bullpen,” Osborn admitted. “He is going to pitch on a set schedule, and it’s probably going to be at least two innings every time out. He is still a priority for us – he has had some nicks and pains in the behind over the last few years with the blister. We are going to try to get him on a clean schedule where he can consistently get out there and perform with some reps under his belt so that he can show what he can do. As I said, he is still a big priority for us, and he is very well thought of in the organization, and we’re looking forward to seeing what he can do out of the bullpen.”

Beyond the plethora of talented arms that Osborn will have at his disposal, the Thunder offense figures to be an improved group with a fair amount of Double-A experience spread throughout the lineup. 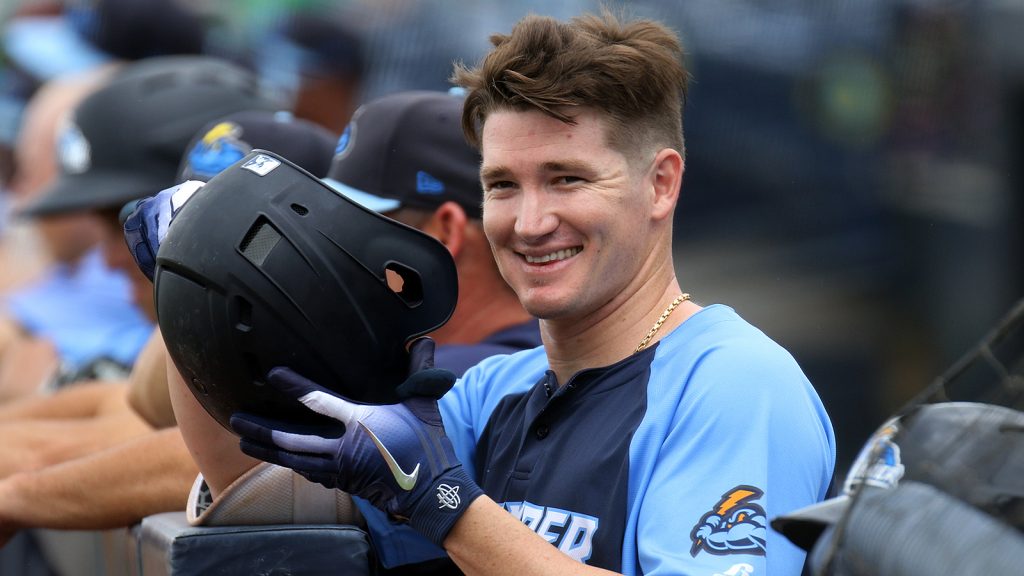 Trenton Thunder’s Kyle Holder in a game against the Hartford Yard Goats in Trenton on Wednesday, July 25, 2018. (Photo by Martin Griff)

“Offensively we have a couple of returnees from last year in Chris Gittens, Trey Amburgey and Brandon Wagner got a little taste of Double-A last year,” said Osborn. “Kyle Holder; I am looking for to a big year out of him. He is healthy, and he is ready to go.”

Osborn added, “I think the make-up of the club is going to be very well-rounded. I don’t think that there is one thing that jumps off of the page, but we’re going to be able to catch the ball, throw the ball; I think we’re going to have some power. The one thing we probably lack is speed, we have Ben Ruta, Jeff Hendrix and Holder runs decent, but that will probably be our weak link.”

“It is nice to feel healthy coming out of camp, I think that is the biggest thing for me,” Holder said. “I am starting the year with good health, and I am just ready to get going.“