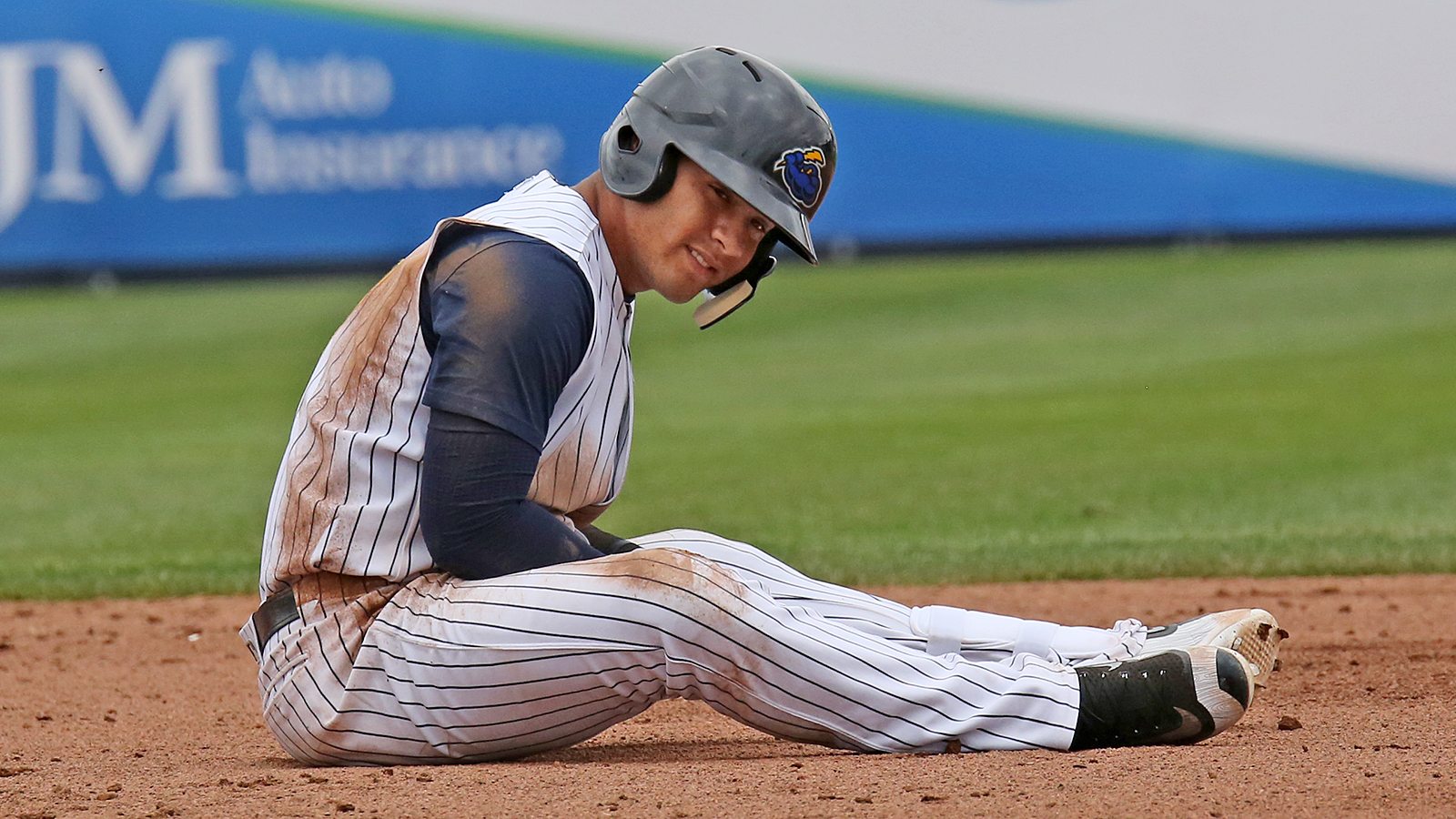 Trenton Thunder’s, Gleyber Torrres sits on the infield dirt after being tagged out trying to stretch a single into a double in the 5th inning against the Portland Sea Dogs at ARM & HAMMER Park in Trenton on Thursday, April 13, 2017. (Martin Griff )

TRENTON – After winning four consecutive games, the Thunder dropped the series finale of a three-game set to the Portland Sea Dogs at ARM & HAMMER Park on Saturday afternoon, 4-2.

The Thunder scored first for the eighth time in nine games this season when third baseman Miguel Andujar knocked in his Eastern League leading 12th run with a third-inning RBI single to plate centerfielder Rashad Crawford.

Andujar knocked in a second run in the bottom of the fifth with another single that again brought Crawford around to score and put Trenton ahead 2-0. 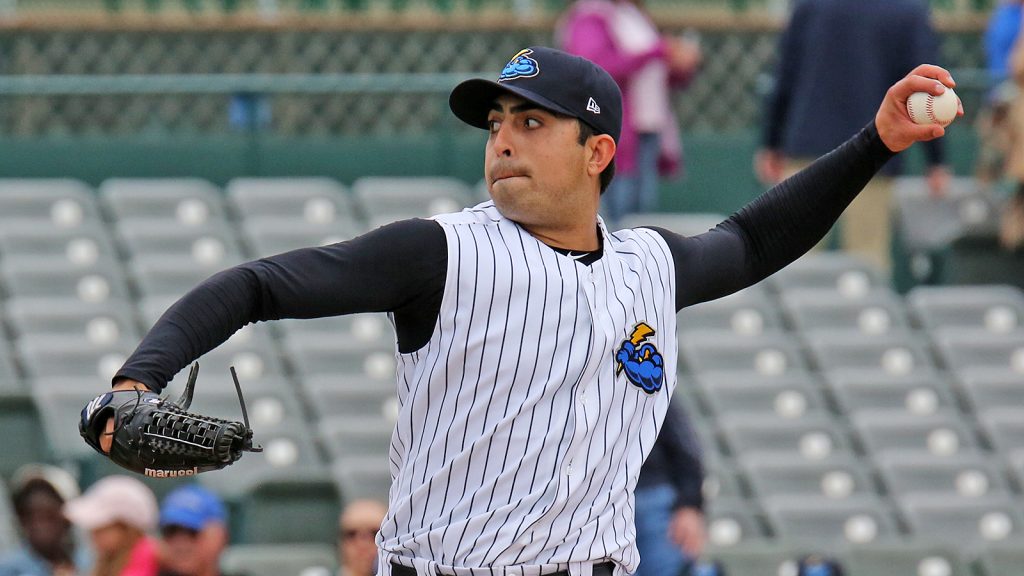 “Miguel is more calm,” explained Mitchell. ‘He doesn’t have all of these moving parts where he is trying to get timing. He is calm, and now it’s easier to see the ball, and he is really squaring up some balls.”

Southpaw Dan Camarena was solid in his second start after allowing four runs on eight hits in his season debut in Erie last Sunday. The 24-year old Camarena scattered six hits as he navigated his way through six scoreless frames.

The seventh inning proved to be the demise of Trenton as Portland rallied for four runs in the frame. After surrendering a leadoff single to right fielder Cole Sturgeon, reliever Matt Marsh came on in relief of Camarena. The 25-year old right-hander struck out the first two batters that he faced and it appeared as though Trenton was going to strand Sturgeon on second. However, a walk by Marsh and an error by first baseman Dante Bichette Jr. opened the door for centerfielder Joseph Monge to triple in three runs to put Portland. Left fielder Aneury Tavarez would tack on an insurance run with a RBI single to put the Sea Dogs up for good, 4-2. 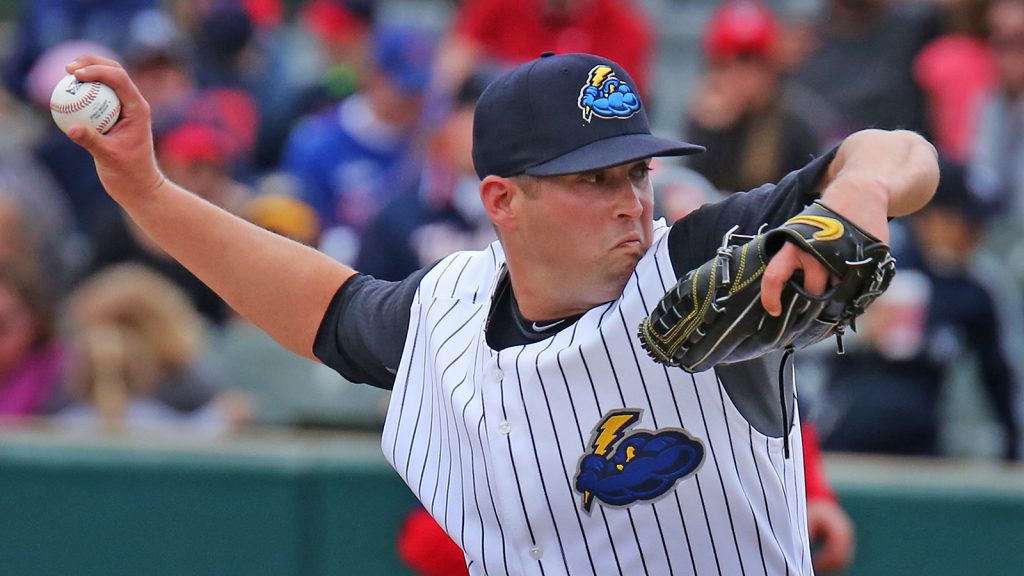 Matt Marsh pitches in relief for the Trenton against the Portland Sea Dogs at ARM & HAMMER Park in Trenton on Saturday, April 15, 2017. (Martin Griff)

“We had a bad seventh inning,” admitted Manager Bobby Mitchell. “Every time we play these guys, even going back to last year, it always seems like there is one inning where they are scoring, or we are scoring, and it becomes a semi-big inning that decides the game.”

Mitchell added, ‘We had the one error that would have gotten us out of the inning, but that stuff happens; the physical stuff. It’s just tough to see a guy like Camarena pitch so well and not get the win to go with it.”

The Trenton loss drops their record to 5-4 overall as they head into an off day on Easter Sunday. They welcome in the New Hampshire Fisher Cats for the opener of a four-game series beginning on Monday night at ARM & HAMMER Park. Right-hander Domingo German is expected to take the mound for his second start of the season.

GRIFFEY IN TRENTON:  Ken Griffey Sr. was on hand at ARM & HAMMER Park on Saturday afternoon. 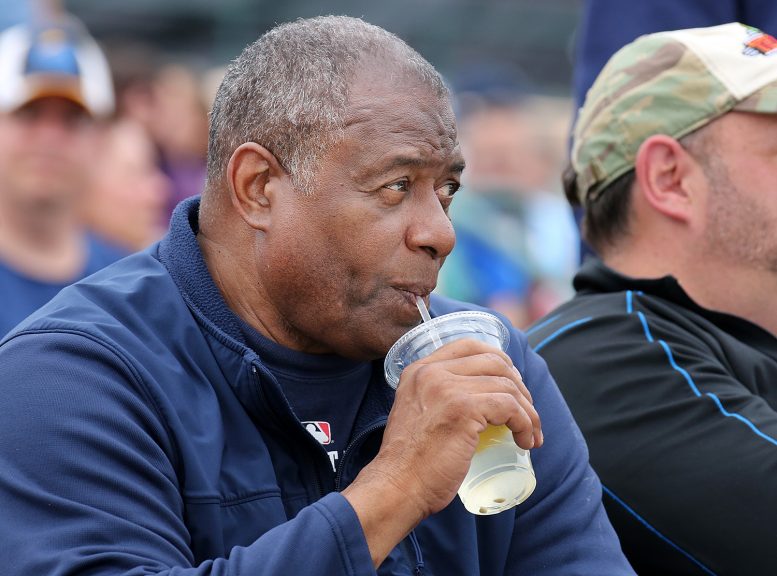 Former major league baseball player Ken Griffey Sr. in the stands behind the first-base dugout to watch the Trenton Thunder against the Portland Sea Dogs at ARM & HAMMER Park in Trenton on Saturday, April 15, 2017. (Martin Griff)