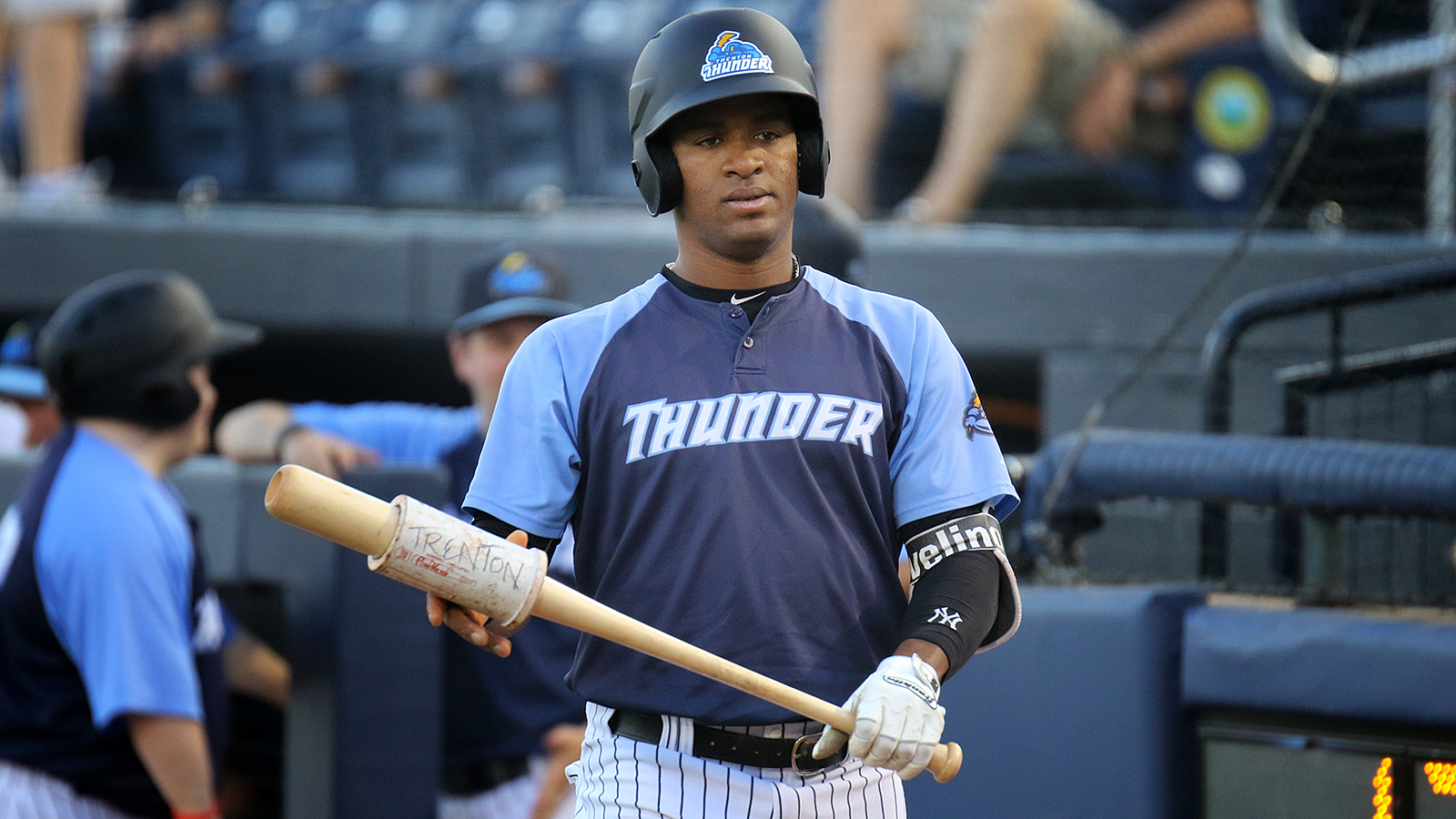 Abiatal Avelino was sent down to Trenton on Tuesday. (Photo by Martin Griff)

TRENTON- The Thunder were without their two rehabbers on Wednesday morning as they took on the Akron RubberDucks in the rubber match of a three-game series and came out on top 5-4.

Yankees first baseman Greg Bird and outfielder Billy McKinney did not play on Wednesday due to scheduled rest. Through two games, Bird and McKinney are a combined 0-13 with two walks, both of them coming from McKinney.

As for the game itself, Akron first baseman Bobby Bradley launched a Home Run to right-center field to give the ‘Ducks a 3-1 lead in the top of the third, only for the Thunder to come charging back in the bottom frame.

A ground ball off the bat of Trenton third baseman Mandy Alvarez to Akron shortstop Todd Hankins went under his glove, scoring Trenton SS Abiatal Avelino from third base to make the score 3-2. Prior to getting on-base, Avelino extended his hitting streak to 10 games and his on-base streak to 15 games.

Thunder OF Ben Ruta followed up by plating home two runners on an RBI Single to right field to make the score 4-3 in favor of Trenton.

A fielders choice off the bat of Akron’s DH Andrew Calica scored OF Connor Marabell to tie the game at four in the top of the fifth, but the Thunder broke the tie in the next inning as catcher Chace Numata sneaked a single into right field to bring home Alvarez and give Trenton a 5-4 lead.

From that point on, the score would stay the same, thanks in-part to a very strong showing from the Thunder bullpen. 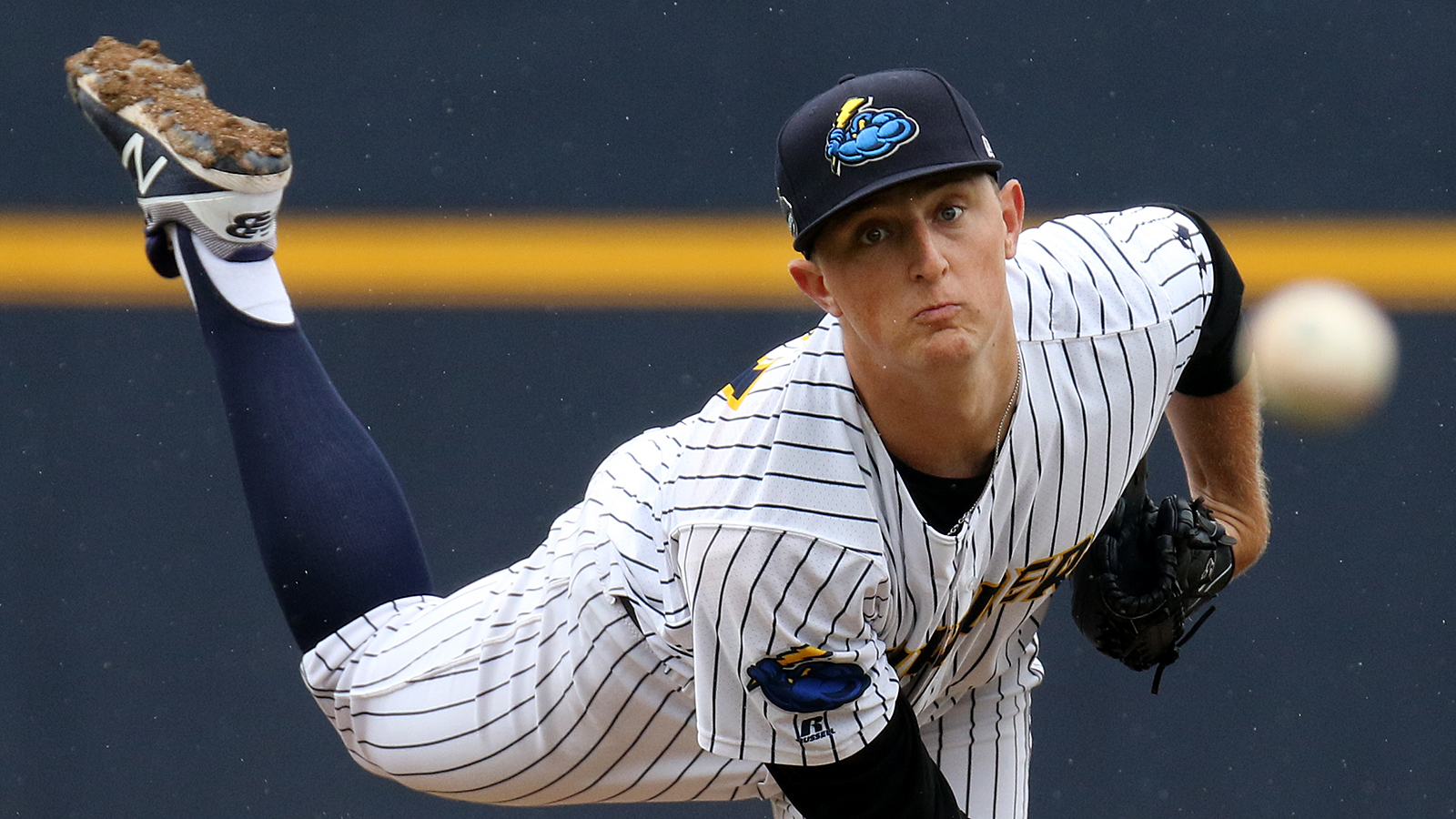 Trenton Thunder relief pitcher Andrew Schwaab works against the Akron RubberDucks in Trenton on Wednesday, May 16, 2018. (Photo by Martin Griff)

“After that first month where we walked too many guys coming out of the bullpen, they’ve gotten back to be a little more aggressive in the strike zone, and that’s what you want them to do,” Trenton Thunder manager Jay Bell said. “You want them to go hunting, and you want them to have that mentality that they’re going to hunt the hitters.”

“Our bullpen mentality is just to go out there, compete with our best stuff every day,” Thunder reliever Caleb Frare said. “Regardless if your fastball is on or not, your slider is on or not, that’s what (pitching coach Tim Norton) preaches to us to just go at them with what you got for the day and have fun doing it.”

“Will kept us in the game,” Bell said. “With him doing what he did, we’ll take the outcome; it was a good outcome, the guys battled and came back from being down, so it was a positive day.”

A notable stat in the game was that the Thunder were caught stealing three times, two came on a rundown when the pitcher threw it over to the bag.

“Avelino got picked off on that play, and he was trying to do a bit too much, and we had a conversation about that,” Bell said. “In that situation, he already did his job by stealing second base, he’s got 4,5 and 6 coming up, he can stay right there, if he wants to steal with one out, fantastic but in that situation right there, you want to be a little more conservative and I don’t know what happened with Numata, I still don’t know so I’m not positive there, we had a few blunders out there today.”

After a day of rest, Bird and McKinney are slated to play the rest of the week through the end of Trenton’s four-game home series with the Bowie Baysox.