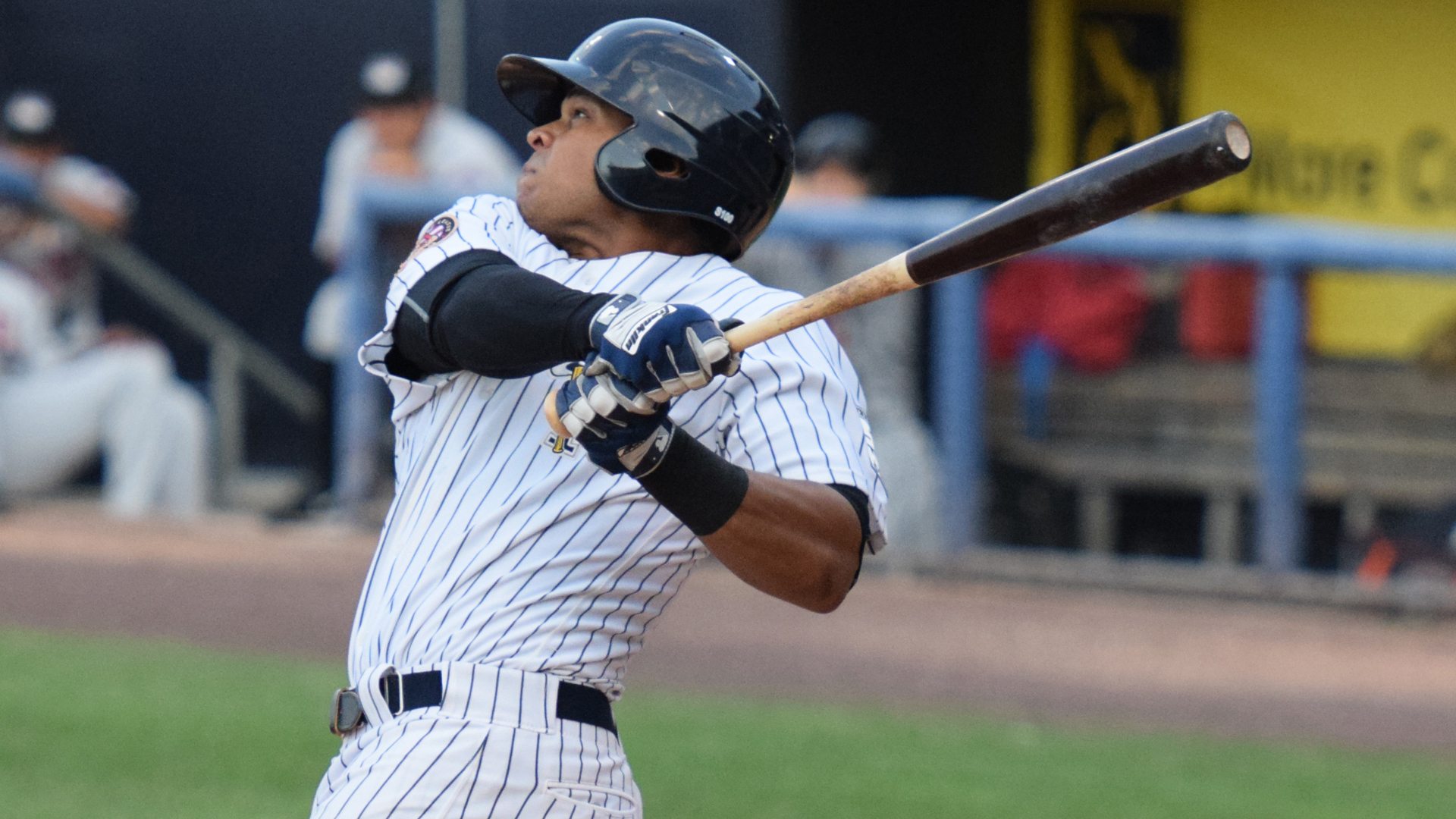 Staten Island Yankees outfielder Timmy Robinson watches as the ball he hits goes over the fence for a homerun in the first inning of the game against the Tri-City Valley Cats on July 21, 2016. (Robert M. Pimpsner/RMP Sports Media, Inc.)

STATEN ISLAND, NY – During the month of July, the Staten Island Yankees have experienced massive turnover with five position players earning promotion to Low-A Charleston. With a new cast of characters in their lineup, the Bombers have struggled to score runs and entered Thursday’s play just one game in front of the Hudson Valley Renegades for first place in the McNamara Division. Returning to home to face the Tri-City ValleyCats, the Yankees’ bats sprung to life, led by a two home run, five RBI performance for Timmy Robinson in a 6-5 victory to open the series.

Tri-City entered Thursday’s play leading the New York-Penn League in average (.275), home runs (29), and RBI (165), but it was Staten Island supplying the damage to open the game against Dustin Hunt, a 10th round pick from Andover, Massachusetts. With Dalton Blaser and Drew Bridges on base, Timmy Robinson clubbed a three-run home run to left field to give Staten Island a 3-0 lead. “Timmy’s been swinging the bat well. He came off the Aberdeen series lifting the ball and getting it up in the air. He had five RBIs and one hell of a night,” Yankees manager Dave Bialas said.

Faced with the task of facing the circuit’s top hitting club, Yankees’ pitcher Austin DeCarr had his work cut out for him and allowed the ValleyCats to tie the game in the ensuing inning with three runs of their own, including a solo home run to the batter’s eye in center field by former Tulane catcher Jake Rogers. The ValleyCats took the lead against DeCarr with a two-out rally in the third inning as Ronnie Dawson drove home Spencer Johnson on a double down the right field line. “I think he was elevating the ball and leaving it up a little bit. He basically ran out of pitches at the end,” said Bialas. 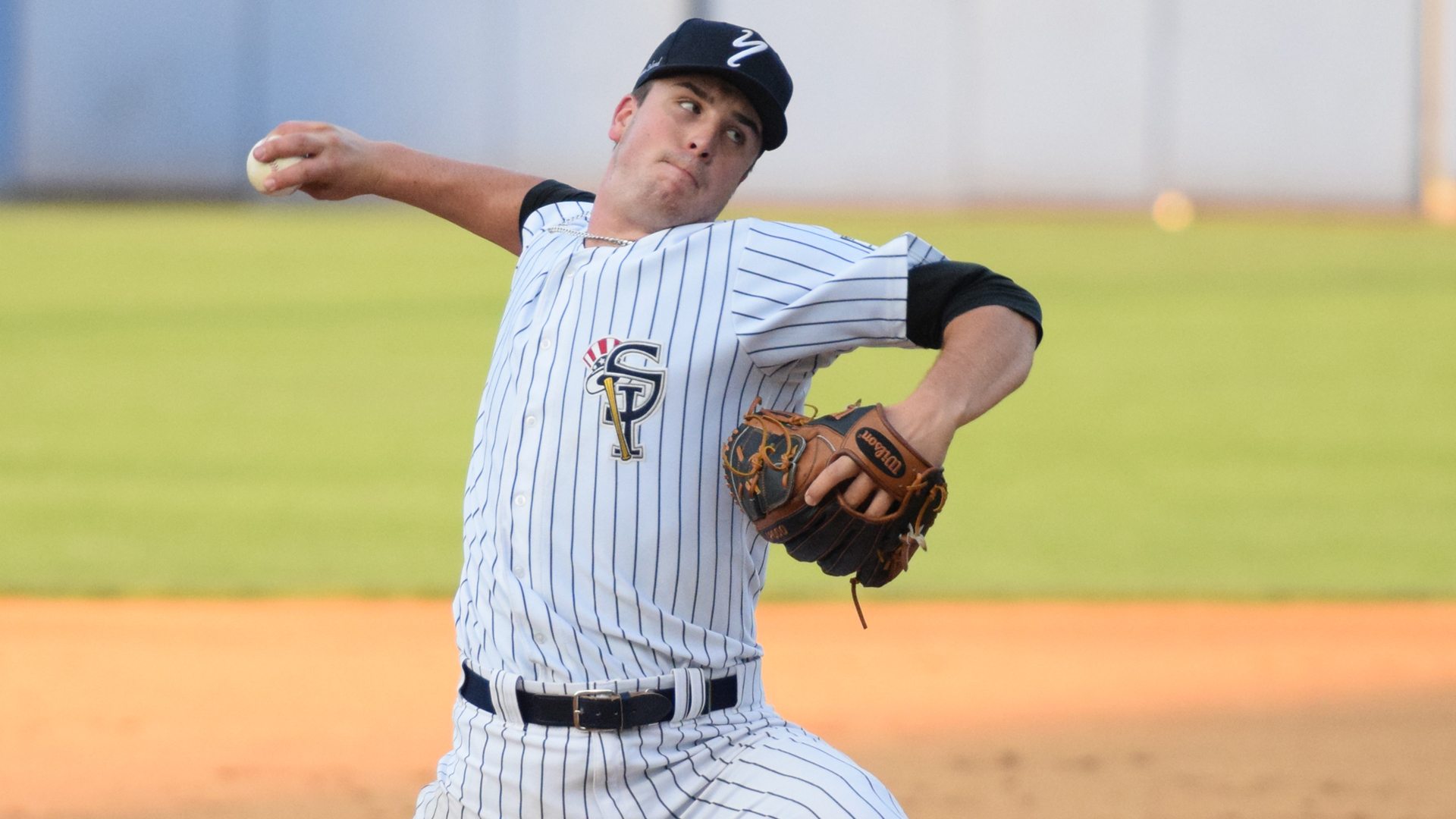 Although DeCarr topped 92 miles per hour with his fastball in his fifth start after returning from Tommy John Surgery, he continued struggling with men on base while he attempts to regain his form. Despite his difficulties DeCarr kept the score close, allowing six hits and four runs (three earned) in 3.2 innings in a no-decision. “It’s been pretty frustrating. Coming back from Tommy John Surgery has its ups and downs. Has nothing to do with my mechanics. I simply have not been executing my pitches,” DeCarr admits.

Trailing by a run, the Yankees tied the game in the bottom of the fourth inning on a Kendall Coleman RBI single. Robinson, who had led the league in runs batted in entering July, homered for the second time in the game in the sixth inning to regain the lead. Robinson dove into the into the right field stands to make a catch against Tri-City shortstop Alex DeGoti for an encore and drove home Nick Solak in the seventh with an extra base hit to cap off a five RBI performance. “The first pitch I saw today was an inside fastball. By giving myself room I didn’t feel like I had to rush to it. Same in my third at-bat when they threw me a changeup,” Robinson said.

Robinson’s college teammate Brooks Kriske allowed a run in the ninth but recorded his third save of the season. “It’s awesome being able to be on the same team as him again,” Robinson said. “He was the closer in our senior year at USC and has taken over the job here in Staten Island. We are locker mates, so we spend a lot of time together.”

Prior to Thursday’s game, the Yankees organization assigned outfielder Carlos Vidal to Staten Island for a rehab assignment after he jammed his thumb diving for a ball with the Tampa Yankees earlier this season. Vidal went 0-for-4 with three strikeouts in his first rehab start as the designated hitter. Staten Island will continue their series with the ValleyCats on Friday and Saturday before playing a three-game next week in Coney Island against the rival Brooklyn Cyclones.