The Yankees first round pick in 2015, the 23-year old James Kaprielian is the team’s top pitching prospect.  In just eight professional games he owns a 2-2 record with a 2.45 ERA and 36 strikeouts in 29 1/3 innings of work.  After missing most of last season with an elbow injury he returned to the mound in the Arizona Fall League.  In the AFL he was back to his old self, showcasing a fastball that hit up to 96 miles per hour.  In the fall league, he went 2-3 with a 4.33 ERA and 26 strikeouts over 27 innings in seven games.

The Yankees decided to hold him to simulated games to start the spring, only getting into one game with them in the Grapefruit League.  He threw two hit-less innings allowing a walk and striking out three batters on March 16.  He ha was re-assigned to minor league after the conclusion of that game and has been pitching for the Tampa Yankees workgroup.  He will likely begin the season in Class-A Tampa, spending the early months of the season in the warm Florida weather before being promoted to Double-A Trenton later. 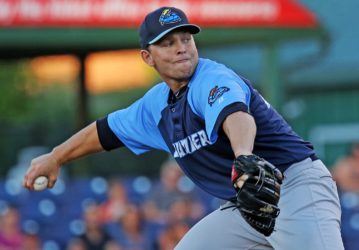 With the Thunder, Adams was equally impressive, earning a 8-1 record with a 2.07 ERA and striking out 71 batters in 69 2/3 during the regular season.  This spring he earned a non-roster invite an in three relief appearances he struck out five batters over four innings, earning a win.  With a fastball that averaged 94 miles per hour 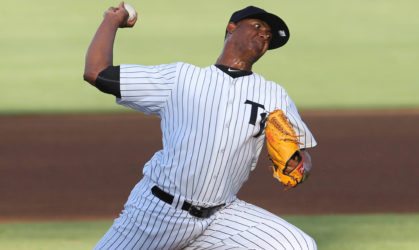 Acevedo, 23, is one of the hardest throwers in the minors, hitting as high as 103 miles per hour with his fastball.  The Dominican right-hander was originally signed by the Yankees as an international free agent at 18-years-old, older than most international signees due to the fact that he did not even start playing baseball until he was 16.

He got off to a solid start in his first professional season in 2013 where he went 1-2 with a 2.63 ERA in 11 games, 10 starts, for the Dominican Summer League Yankees where he struck out 43 batters in 41 innings.  He came over to the United States in 2014 when he pitched in five games for the Gulf Coast League Yankees, striking out 21 in 15 1/3 innings of work.

Look for Acevedo to start out in Tampa this season, spending the colder months in Florida before moving to Trenton later on. 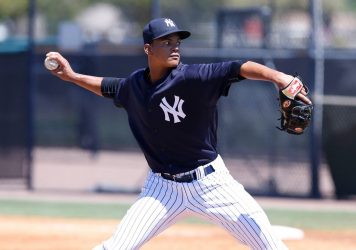 Acquired by the Yankees in the Brian McCann deal this past offseason Abreu, 21, is another hard thrower like Domingo Acevedo.  He has the potential to be a front of the rotation guy but like Acevedo there are questions on whether or not he sticks to the rotation or becomes a bullpen arm.  It is a good problem to have as potential ace’s usually have a lot of question marks.

Last season Abreu split the season between the Quad City River Bandits and Lancaster JetHawks.  Between the two teams he went 3-8 with a 3.72 ERA in 24 games, 16 starts and struck out 115 in 101 2/3 innings.  He limited hitters to just a .202 batting average against.

Dillon Tate was drafted by the Texas Rangers with the fourth overall draft pick in the 2015 draft, the 22-year-old right-hander dazzled scouts with a high-90s fastball, slider, a developing changeup and a curveball.

He Was impressive in his first season appearing in six games for the Spokane Indians and Hickory Crawdads earning a 1.00 ERA and striking out eight in nine innings of work.  The Rangers tweaked his mechanics during the offseason but the changes did not work as in 2016 with Hickory he struggled, earning a 3-3 record with a 5.12 ERA in 17 games, 16 starts and batters hitting .311 against him.

After being traded to the Yankees on August 1, 2016 for Carlos Beltran he reported to Charleston.  With the RiverDogs the Yankees had him go back to the mechanics that worked for him during his amateur career and also moved him to the bullpen.  With Charleston, he went 1-0 with a 3.12 ERA in seven games.

The question is will the Yankees let him return to the rotation or will he remain in the bullpen.