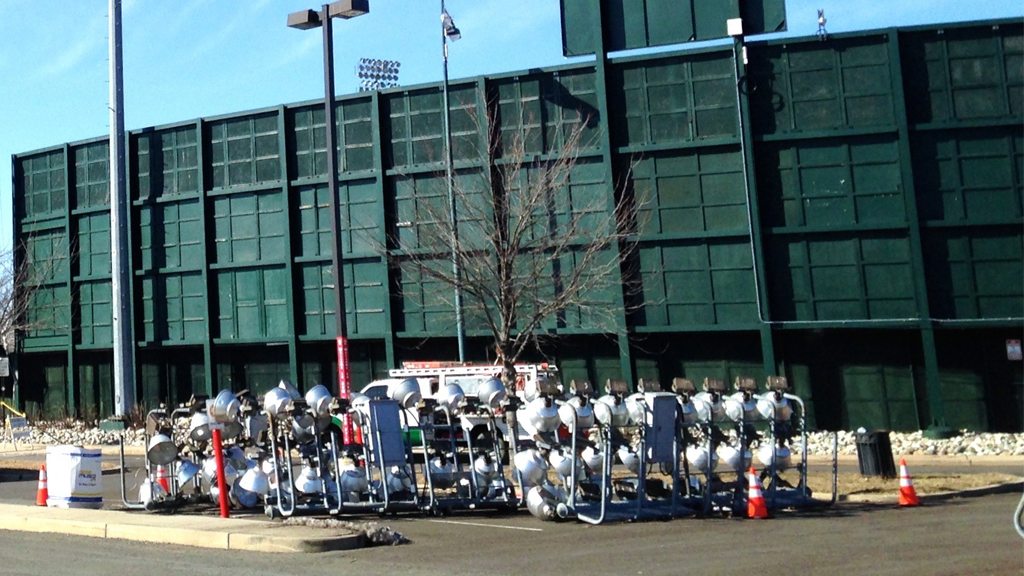 The old lights ready to be retired. (Jed Weisberger)

TRENTON, N.J. – Since Double-A Baseball arrived in New Jersey’s capital in 1994, and the Trenton Thunder’s partnership with the Yankees in 2003, Arm & Hammer Park has been one 0f the best-lit fields at that level.

The ballpark’s eight light towers offer an even source of illumination of the playing surface not seen in many Minor League stadiums, and things are about to get even brighter.

Thunder fans will be able to see top outfield prospect Aaron Judge and other soon-to-be favorite stars in a new light.

Arm & Hammer Park joins other Musco-lit ballparks, including Yankee Stadium and Citi Field, and arenas such as Philadelphia’s Wells Fargo Center. Musco has been a trendsetter in sports lighting 1976. It has built business success by giving its customers the best lighting system for their use in a cost-effectve way.

According to the company Web site, “Musco has attained first-hand knowledge of lighting issues that affect participants, spectators, and television.”

“From what I’ve been told, this will be a brighter, more efficient system than our old one,” said Trenton Thunder general manager Will Smith. “We’re looking forward to it.”

Arm & Hammer’s old system, which had been in place since the park opened, had been battered in recent years by Hurricane Sandy, excessive wind and a few ice storms. It earned its place in retirement.

Right now, cranes and unmatched light towers are the norm around the ballpark. The aim is to complete the HID installation by the first week of March. Soon after that, baseball will be placing the pitching clocks required at the Double-A and Triple-A levels.

The weather in the Mid-Atlantic is still in Old Man Winter’s grip, but Spring Training begins next week and the Thunder, with new manager Al Pedrique, will first play under the new lights April 16, hosting the Portland Sea Dogs after opening their Eastern League season with a seven-game road swing through Erie and Akron.