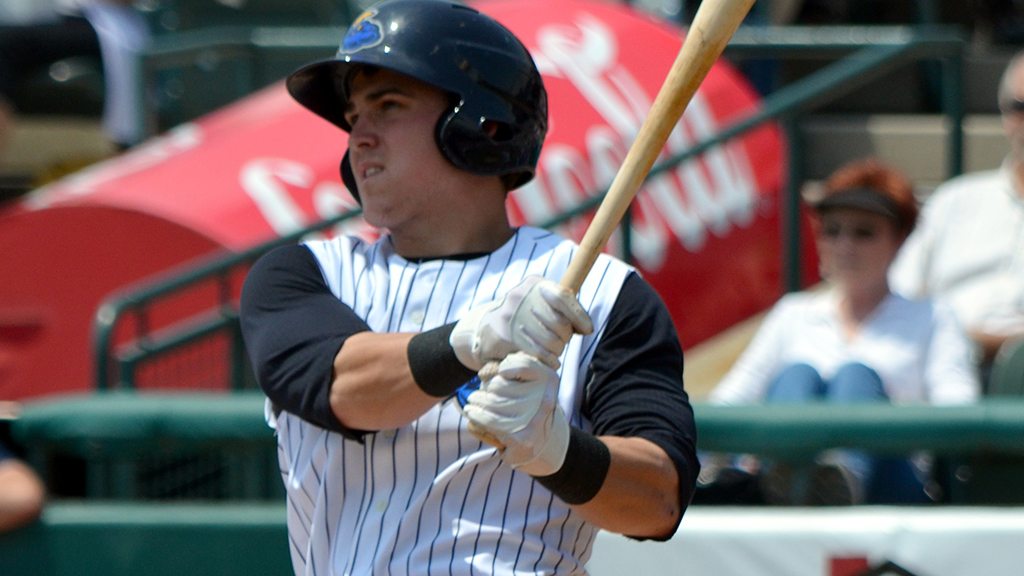 Tyler Austin with the Trenton Thunder in 2014 (Rand Greenblatt)

To many, Tyler Austin is still a prospect who can help the Yankees in numerous ways. Others are not as forthcoming in their praise.

Perhaps it has to do with the fact he belted 17 homers ad drove in 80 runs during a 2012 season in which he started in the Gulf Coast League and ended up at Double-A Trenton. Going into 2013, a lot was both predicted for – and expected from – the Conyers, Ga., native who just turned 23 last Sept. 6.

But a wrist injury,with which he played with for over a month without informing Trenton manager Tony Franklin and his staff of ended up limiting his to 83 games in 2013, in which he batted .257 (82-for-366) and his power was noticeably absent. He also was pulled from the Arizona Fall League in 2013 after the wrist acted up again.

Players, especially minor-leaguers looking to impress, try to play through such things.

“The wrist set me back,” Austin said during the 2014 season. “I really think all that is past me, and I’m just about back to where I need to be. I’m really feeling good.”

Austin seemed to gain both strength and confidence as his 2014 Trenton season went in, finishing strong to bat .275 (109-for-437) with 20 doubles, five triples and nine homers and 47 RBIs. He also showed versatility, appearing in 59 games in right field, where he had four assists, 19 at first base, where he played flawlessly and eight at third base, which was a bit more challenging with four errors and 19 as the designated hitter, mostly early in the season.

“I really feel good, and am glad I am getting another shot at the Arizona Fall League as the 2014 season neared its close.  Austin’s regular season ended a week early due to “family issues.”

Yet, the 6-foot-1, 220-pound Austin, who passes the eye test, played well for the Scottsdale Scorpions in the AFDL, batting .304 (21-for-69) with two homers and 13 RBIs.  His season there ended a few days early as well, as he slammed into a wall, but emerged with just some bumps and a bruised knee.

This is a player, who, io 349 minor-league games has amassed an excellent OPS of .846. Teammates admire him for his gritty play, and he has all the skills. He will have to show of his power has returned with a healthy wrist at Triple-A Scranton in 2015, as he has hit just 38 homers in those 349 games. He did show some power in the AFL, and the Yankees protected him from last week’s Rule 5 Draft by putting him on the 40-man roster.

Austin is a pleasure to talk to, has a lot of talent and, according to the feelings of most observers, faces a crucial season in 2015. Just what will his eventual role and status be in the Yankees improving system?

He is a solid right fielder with an above-average arm, but Aaron Judge is coming fast at that position. He can play first base, but Greg Bird is on the fast track there. Third base does not appear to be a viable position for him. All this is an indication of how the Yankees system is improving, with a bevy of talented outfielders and power prospect Kyle Roller at first base in Triple-A.

However, as a member of the Yankees 40-man roster, Austin has a chance to make major advances in 2015 if he stays healthy. If consistent power returns, there is certainly a place for him in The Bronx as a super-utility player and another future cog with Judge and Bird.

He also could be an attractive trade chip if healthy. By the end of the 2015 season, his future ought to be much clearer.