Tyler Austin's Mother Reflects on Her Son's Call-Up by Yankees 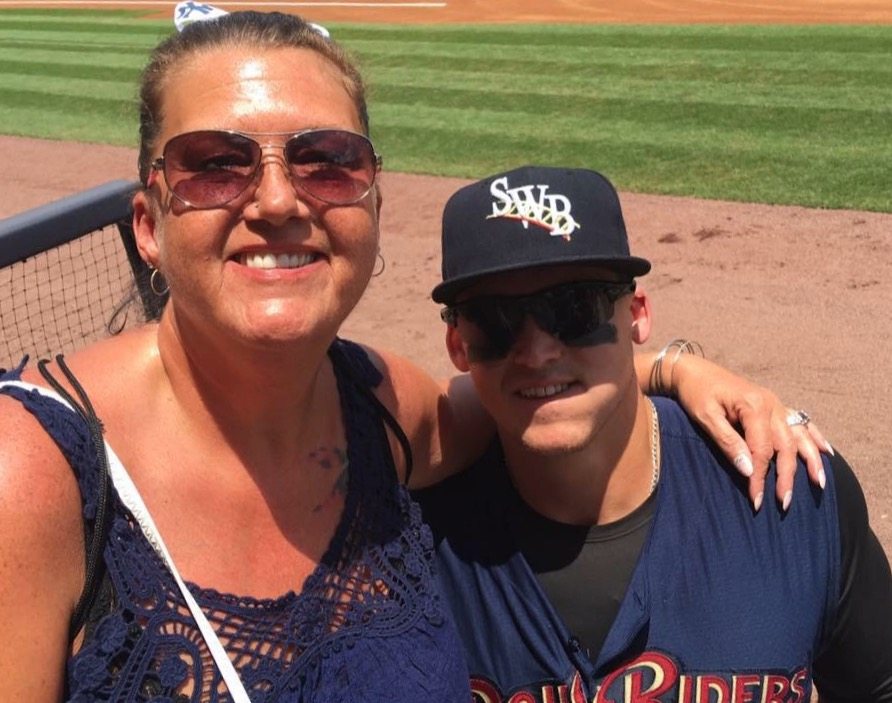 Last week the Yankees unveiled two of the premiere prospects in their farm system, Aaron Judge and Tyler Austin, to a packed house in the Bronx. The team was coming off an emotional Friday night when they bid adieu to Alex Rodriguez. While the world was wondering who would replace A-Rod on the Yankees roster, Kim Austin was scrambling to make logistic arrangements to watch her son make his major league debut the following morning.

“I had just pulled into the parking lot of the grocery store,” admitted Kim. She then got a phone call from Tyler that she has been waiting to come for six long and grueling years. “It was around 3:00 on Friday afternoon,” shed said. “At first, it was just a normal conversation like “Hey mom, what are y’all doing?” Except it was a very unusual time to call, so I asked him what was wrong, and he said nothing, I just got called up. I had to have him repeat it, actually. After that we both kind of broke down a little. It was a wonderful moment, and I feel very fortunate to have shared it with him.” 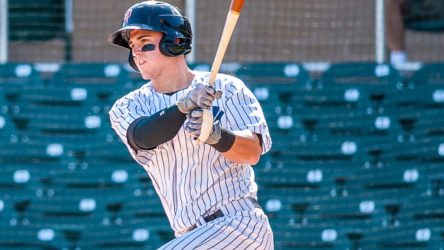 The path to the majors for Tyler has been one that was far from a sure thing and many times seemed far-fetched. To appreciate his career as a big league baseball player, you have to first understand the story of how he reached that point and persevered from many obstacles.

Austin was diagnosed with testicular cancer when he was 17-years old, and he underwent surgery to treat it. While he battled his illness, it did not stop major league teams from coming to Georgia to show interest in drafting him. Tyler was ultimately selected by the Yankees in the 13th round of the 2010 First Year Amateur Player Draft during his senior year at Heritage High School.

Tyler exploded onto the prospect scene in 2012 when he ascended through four levels of the minor league system in one season (Gulf Coast Yankees, Charleston, Tampa, Trenton). Across those four levels as a 20-year old, Austin hit a combined .322 with 17 homers and 80 RBI while going 23-for-25 on stolen base attempts. He went on to be named the Kevin Lawn Award winner, given every season to the organizations stand-out minor league player.

“Facing a potentially fatal cancer diagnosis at any age is devastating, but at 17, it was heartbreaking,” Kim Austin explained. “He placed himself in Gods’ hands, and he just knew it was going to be alright.” 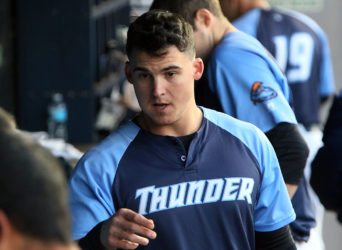 Trenton Thunder infielder Tyler Austin in the dugout during a game against the Portland Sea Dogs at Arm & Hammer Park in Trenton on Tuesday, April 12, 2016. Photo by Martin Griff

Since that 2012 campaign, Austin had never come close to duplicating those numbers. He battled nagging injuries, most notably, a wrist injury that has cost him hundreds of at-bats and days on the disabled list over the last three seasons. As he tried to battle through the injury, the numbers became pedestrian and his stock on prospect rankings began to plummet, so too did his standing within the organization.

“It was the same thing with the wrist injury,” Kim said. “It lingered, and he again knew that everything would be fine. All in due time. It’s God’s plan, not ours. But, enduring all of that adversity made him stronger and more determined than ever. It makes this all even more special.”

The Yankees opted to protect Austin from the Rule-5 Draft during the winter meetings in December of 2014. They were going to need to see a huge comeback season from the once promising hitter if they were going to keep him in their long-term plans.

Austin began 2015 in Triple-A with the RailRiders and he struggled so mightily (.235, 4 HR, 27 RBI in 73 games), that they sent him back down to Double-A for his third go-around in the Eastern League. His performance did not markedly improve there and on September 1 of last year, the Yankees decided to designate him for assignment. It appeared as though the door to dawning pinstripes had been nailed shut.

Every organization had the opportunity to pick Austin up after the Yankees cut him loose. Instead, he cleared waivers and was optioned back to Double-A, where he began this season under Bobby Mitchell in Trenton.

After a slow start, it became apparent that Tyler had figured things out. He worked tirelessly with Hitting Coach PJ Pilittere on simplifying his approach, and it revived his career and brought him out of the depths and thrust him into the show. After hitting .260 with four homers and 29 RBI in 50 games for Trenton, Austin appeared ready for another shot in Scranton. Once he got back to Triple-A, Tyler put up video-game-like statistics in a short amount of time. In just 57 games in the International League, he belted 13 homers and drove home 49 runs while batting a robust .323 over that stretch. 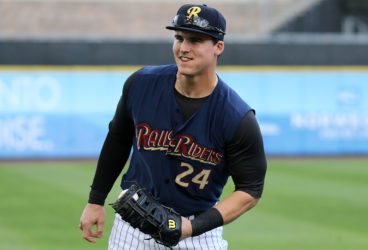 Scranton/Wilkes-Barre RailRider’s Tyler Austin before a game against the Charlotte Knights at PNC Field in Moosic, Pa. on Tuesday, June 7, 2016. Photo by Martin Griff

As the Yankees became sellers at the trade deadline, the future became the present for Tyler. As he arrived in the Bronx and dawned the pinstripes that he dreamed of wearing as a little leaguer in Georgia nearly 20-years earlier, his family was overcome with joy and emotion.

“It was our first time to Yankee Stadium and just walking up to the gate was surreal,” said Kim. “I felt like I was walking on hallowed ground; I had goosebumps. I felt like I could feel the presence of all of the great players that had played there.”

Kim added,” I sometimes feel like Tyler channels his nervousness over to me. I never, ever sit in a seat very long during his games. I’m always pacing. Saturday and Sunday’s games were the first two games during his life that I sat for two entire games. I was just thankful that it was so hot that my tears mingled with the sweat, so no one knew I was crying. I was genuinely so nervous that I thought I was going to be sick.” 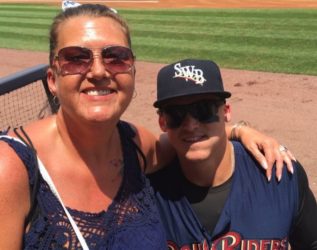 Her nervous tension quickly turned to joyful astonishment as Tyler turned on a pitch from Tampa Rays starter Matt Andriese and poked an opposite-field line-drive homer in his first career at-bat just over the short porch in right field to put the Yankees ahead 1-0.

Judge followed up by smashing a solo shot of his own over the fence in dead center field in his first career at-bat, too. Austin and Judge are the first teammates to hit home runs in their first Major League at-bats in the same game in major league history.

“It has been like a roller coaster,” admitted Kim. “Sometimes your arms are up in the air and your enjoying the ride, other times your hanging on for dear life. When Tyler was in Charleston and Tampa, we were able to see a lot of his games. But, in Trenton and Scranton, we watched the play-by-play religiously. It was difficult, to say the least. I came to depend on pictures that were sent to me; I missed him like crazy.”

Kim added, “I never doubted that he would make it to the show. Tyler is the type of guy that if you told him that he couldn’t do something, he was bound and determined to prove you wrong. He is tenacious like that.”

The doubters have been proved wrong. Tyler Austin is a major league baseball player.