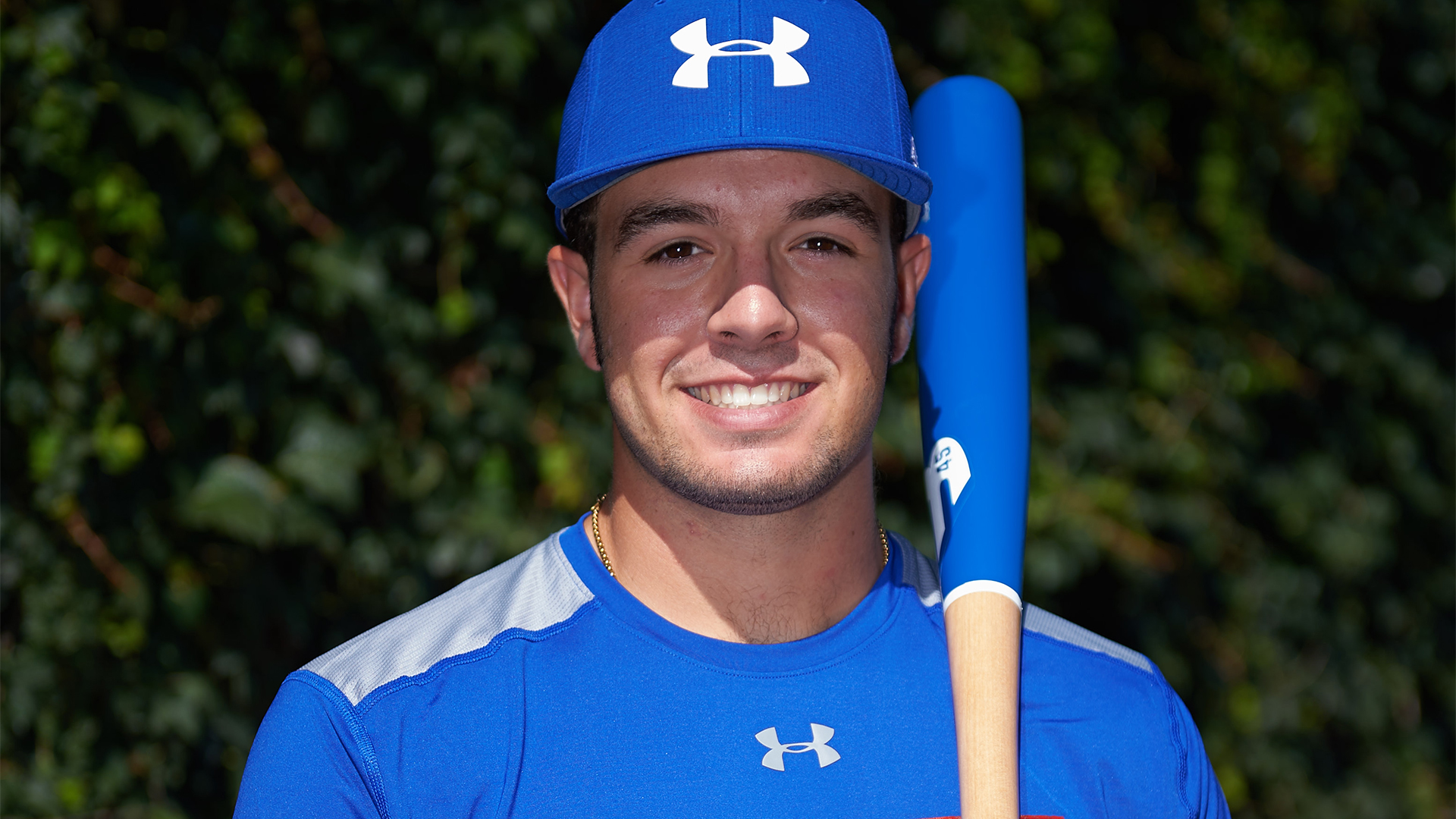 Austin Wells (16) of Bishop Gorman High School in Henderson, Nevada poses for a photo before the Under Armour All-American Game presented by Baseball Factory on July 29, 2017 at Wrigley Field in Chicago, Illinois. (Mike Janes/Four Seam Images via AP)

In what was an unpredictable 2020 MLB Draft, the New York Yankees went to a position that they drafted early a couple of years ago in Anthony Seigler and Josh Breaux. They elected to go back to the catcher spot by selecting Austin Wells out of the University of Arizona. Wells is the first position player to be taken by the Yankees out of Arizona since they selected infielder Rob Refsnyder in the 5th Round back in 2012.

“We are very happy to get Austin Wells today,” said Yankees Vice President of Domestic Amateur Scouting, Damon Oppenheimer in a statement released to the press after the first round. “We thought he was one of the top hit and power combinations in the draft. We love his desire and makeup, along with his athleticism. We have known him for years and seen him progress quite a bit behind the plate to allow us to believe he can be an impact guy.”

To Yankees fans, the pick should be familiar. Wells was the organization’s 35th round pick back in 2018 out of Bishop Gorman High School in Las Vegas, Nevada. Wells decided not to sign and go to Arizona and he dominated with his offense in the PAC-12.

In 2019, as a freshman, he hit .353 with 5 home runs, 15 doubles, 7 triples, 60 RBIs, and an on-base percentage of .462. Plus, he walked more times (46) than he struck out (43) en route to winning Pac-12 Freshman of the Year. That is plate discipline that is simply hard to teach. If he can bring the same plate discipline at the professional level to go with his power bat, that will be tough for opposing pitchers to figure out.

For Wells, his performance in the Cape Cod League last summer probably helped open eyes to how talented he could be. With the wood bats, the power still showed up to the ballpark. In 42 games with the Yarmouth-Dennis Red Sox, he had a slash line of .308/.389/.526 with 7 home runs, 13 doubles, 26 RBIs, and 22 walks. While the strikeouts did go up to 46 (14 more than any player on the squad), the offense stayed consistent as shown in this video courtesy of Prospects Live:

The popular comparison that you have seen in regards to Wells is Kyle Schwarber from the Chicago Cubs. The bat speed for Wells is what jumps out on the screen wen you watch the tape. The power from the left side can help Wells have a field day at Yankee Stadium should he reach the majors.

While offense is a strength for Wells, there is a question however with his defense and whether or not he can stick at catcher. Well, although it was a small sample size, the lefty only allowed a single passed ball during this shortened season compared to 10 a year ago. At the Cape Cod League, he only threw out 21% of runners trying to steal (5 out of 19).

Regardless of those numbers, Arizona head coach Jay Johnson told Michael Lev of The Tucson Star how Wells was doing a good job getting strikes for his pitching staff and as the season was winding down, Lev mentioned the improvement Wells was showing in terms of pitch framing:

“He did an exceptional job of keeping strikes, strikes — the pitches that we were supposed to get — and even some that maybe we weren’t supposed to get,” Johnson said.

“For example, in Arizona’s final two games of the season, Wells “stole” 13 pitches that were outside the strike zone, according to TrackMan data. That equates to almost 1.5 runs saved,” wrote Lev.

If you go back to Wells’ high school days in Nevada, he had a good pop time for a catcher. According to Perfect Game Baseball, they had Wells at a 1.91 pop time, which was better than average. For those who don’t know pop time, it is the time it takes from the catcher to receive the ball from the pitcher to the base he is throwing to on a stolen base attempt. On his Perfect Game page, you can find video of Wells working on catching drills from high school.

When you look at the Yankees’ organization as a whole, Wells does fit a need at catcher. They don’t really have a true set catcher of the future. Yes, they drafted Seigler and Breaux high, but none of them have set themselves apart yet. You can also include Jason Lopez and Donny Sands as lower-level catcher depth, but the key will be which one can emerge and separate themselves from the pack?

However, if the Yankees feel he is not the catcher of the future, there are still other ways to get his bat in the lineup. They could try him at first base (27 games in 2 seasons) or out in the outfield. At the Cape last summer, he played in left field 24 times.

Wells could break into the system at first base when you consider that there is no first baseman of the future in the Yankees system. Yes, there is Mike Ford at the major league level and Chris Gittens, who finished 2019 at Double-A Trenton. With that being said, Wells’ progress isn’t blocked by another top prospect at the position.

With this pick, the Yankees have a bunch of directions they can turn to as long as the bat continues to perform. In this era of baseball, versatility is key and allows more playing time. In Austin Wells‘ case, versatility could be the key that eventually gets him on a pathway to the Bronx.