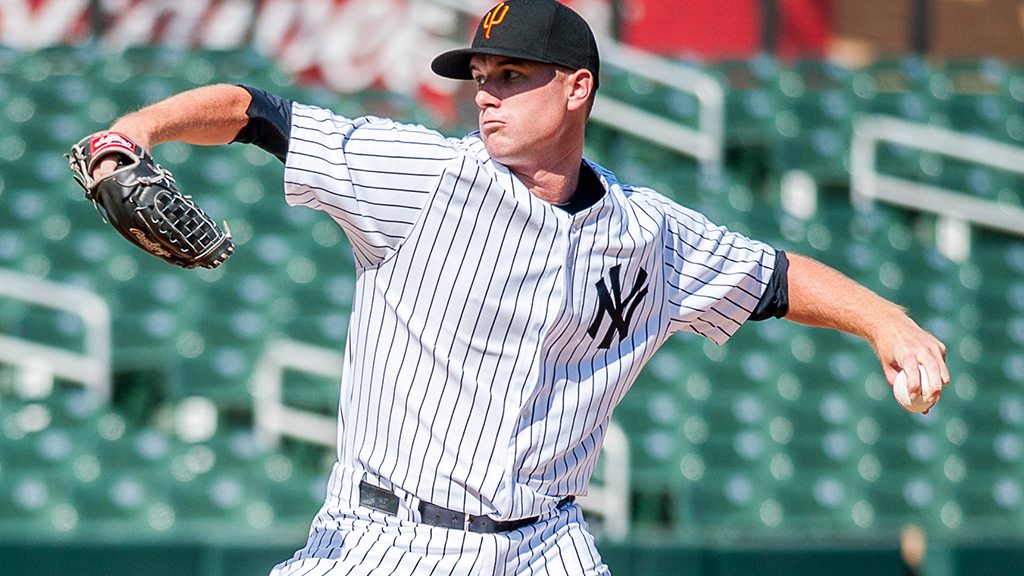 Webb needed just 58 pitches (40 strikes) to toss his four frames of two-hit, no-walk baseball. He had not started over his first 115 appearances as a pro including nine in the Arizona Fall League. The 25-year-old Virginia native, who pitched his high-school ball just an hour’s drive north of Harbor Park, had last started in 2011 while with the eventual national champion University of South Carolina Gamecocks.

Catcher Kyle Higashioka gave the RailRiders the only run they would need with his first Triple-A home run, a first-pitch job to left in the third inning off starter Joe Gunkel. SWB added to it in the sixth when Chris Parmelee singled home Ben Gamel. One outing removed from his first Triple-A win, Gunkel (1-3) took the loss despite a quality start.

In his first SWB appearance, Layne Somsen (1-0) got the win in relief with two innings of one-hit ball and four strikeouts. Conor Mullee allowed just one baserunner on an error over his two innings before handing the baton to Anthony Swarzak, who struck out two in a perfect ninth for his fifth save in as many tries.

The series concludes at 1:05 p.m. on Sunday afternoon when Brady Lail (2-1, 3.32) faces fellow right-hander David Hale (0-2, 3.32). The RailRiders return home for an eight-game homestand on June 2. It starts with the first of four against the Columbus Clippers (Cleveland Indians) at 6:35 p.m. The Thirsty Thursday presented by Budweiser features $1 Bud Lights and Pepsi products. For tickets or more information, please call 570-969-BALL (2255) or visit swbrailriders.com.

Norfolk owns Triple-A’s worst record at 17-33 and has not scored in 24 straight innings.

SWB, which improved to an IL-best 29-21, has not allowed a run in 22 consecutive frames. The club tossed a season-high 28 straight scoreless innings from April 12-14, a run that included its only other set of back-to-back shutout wins, at Pawtucket on April 13 and versus Syracuse on April 14 in 11 innings.

In his first Triple-A game in a dozen days, Rob Refsnyder started at third base as the three-hole hitter. He went 1-for-3 with a double and a walk.

Hampton, Va. native Jake Cave went 1-for-3 with a walk. He was thrown out at the plate to end the fifth by center fielder L.J. Hoes. Cave attended high school just 30 minutes away from Harbor Park.

All seven of Norfolk’s hits on the series have been singles.  That included three on Saturday night, two on the infield.

The game saw two different delays due to the failure of a first-base-side light tower. The first came with Donovan Solano at the plate, down 1-2 in the count during the top of the fifth inning. After a 15-minute delay, he struck out looking. The next half-inning, the lights went out again with the bases empty and two outs just before Francisco Pena stood in against Somsen. After a 16-minute delay, Pena jumped ahead 3-0 in the count before he walked on five pitches.

Norfolk’s Ron Johnson managed his 626th career game for the Tides, breaking a tie with current Buffalo skipper Gary Allenson for the most in franchise history.