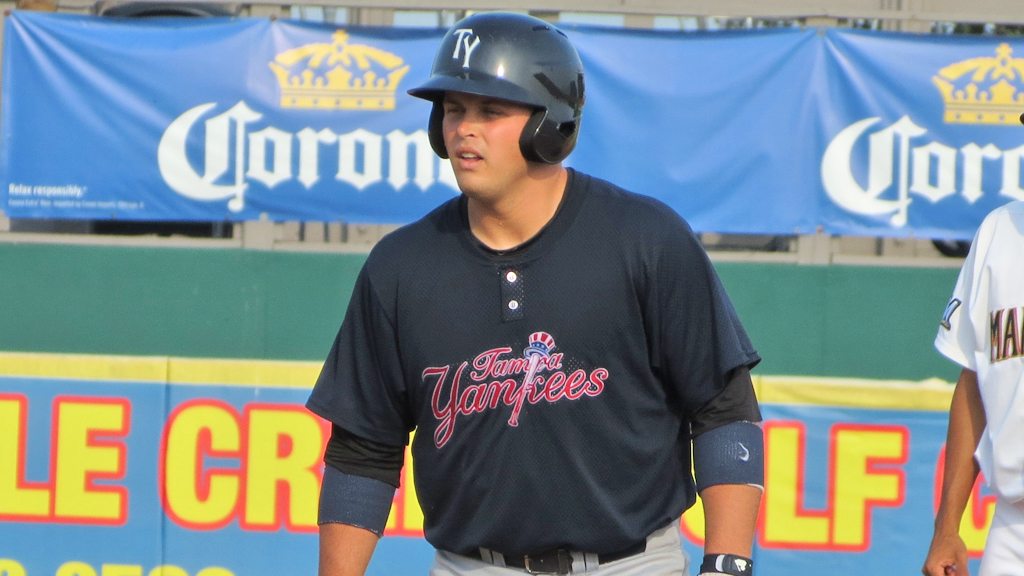 Wes Wilson is a future minor league manager and has already helped younger prospects in the system. (Bryan Green)

The Tampa Yankees were at McKechnie Field on Thursday night for the final game of the series against the Bradenton Marauders and the final game before the upcoming FSL All-Star Weekend at Tradition Field in St. Lucie.

The T-Yanks were able to finally get on the board in the top of the fourth with the first run scored off a RBI double by Miguel Andujar to send Abiatal Avelino home. The second run of the inning was scored off a sac fly by Ericson Leonora to send Tyler Wade home making it a 3-2 ballgame.

A solo homerun by Michael O’Neill, his second of the season, on a fly ball to left center field tied the game at three.

RHP Chris Smith (ERA 2.08) then took over pitching duties for the T-Yanks in the seventh inning.

Tampa was able to break the tie in the top of the ninth with a RBI single from Avelino to send O’Neill home and make it a 4-2 ballgame.

Bradenton was able to tie the game at four with a RBI single by Espinal to send home Harold Ramirez.

Smith pitched 2.2 innings allowing four hits and one run; striking out one batter.

RHP Giovanny Gallegos (ERA 1.25) closed out the ninth inning saving any more damage from Bradenton and keeping the game tied at four runs a piece and forced extra innings.

LHP Eric Wooten (ERA 7.20) then took over for the T-Yanks in the bottom of the 12th. Wooten pitched four scoreless innings allowing three hits while walking one and striking out two.

Tampa’s Wes Wilson who started the game as the catcher for the Yankees and then remained behind the plate for fifteen innings then took over pitching duties in the top of the sixteenth.

Wilson pitched a 1-2-3 inning but, he wasn’t done just yet! Wilson then led off the top of the seventeenth inning with a solo homerun, his first career homerun, on a fly ball to left center field to give the Tampa Yankees the 5-4 lead. Wilson then proceeded to go back to the mound in the bottom of the seventeenth and with another 1-2-3 inning and a combined twenty one pitches on the night, secured the win for the Tampa Yankees and his first win as pitcher as well.

The Tampa Yankees will resume play on Monday evening at George M. Steinbrenner Field when they will take on the Dunedin Blue Jays at 7:00pm.