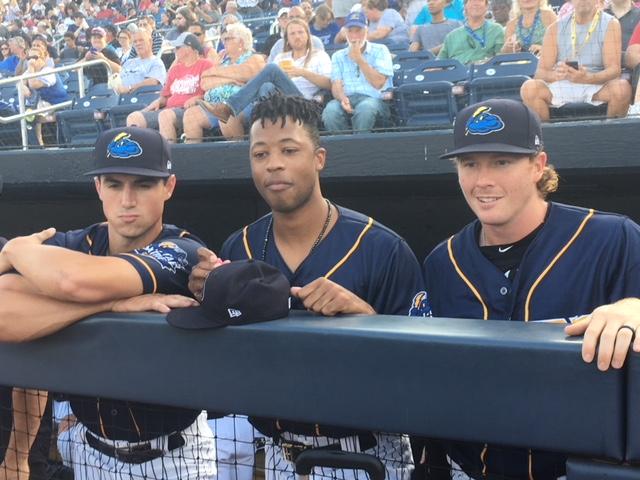 TRENTON – Thunder outfielder Trey Amburgey, participating in his first professional all-star game on Wednesday night at ARM & HAMMER Park, notched a game tying RBI double down the left field line with two outs in the bottom of the ninth inning off of Harrisburg pitcher Derek Self to knot the score at four runs a piece. Instead of heading into extra innings, both teams were forced into a points-based swing-off competition to decide the winner.

The East was represented by Reading prospect Zach Green took hacks for the East while Pirates 2016 first-round draft selection, Will Craig represented the West. During the bonus round, Craig totaled 305 points, while Green came up 30 points shy and the West ultimately came away with victory, despite either side not really knowing the rules of the competition and how it was being scored. 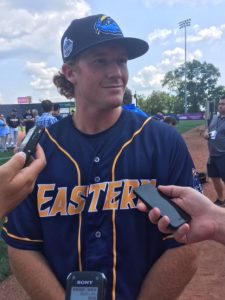 Action was knotted at three in the bottom of the eighth inning when Thunder southpaw Caleb Frare surrendered a go-ahead solo homer to the games MVP award winner, Luigi Rodriguez of Richmond, to put the West ahead 4-3.

The East jumped out to an early lead due large in part to the power of Reading duo Jan Hernandez and Eastern League Home Run Derby winner Deivi Grullon, who delivered a two-run and solo shot respectively, to stake the East to a 3-0 lead in the fourth.

The West would rally in the fifth on back-to-back RBI singles from Connor Marabell of Akron and Ke’Bryan Hayes of Altoona and a wild pitch uncorked by Daniel Zamora plated the tying run.

Thunder reliever James Reeves pitched just 1/3 of an inning on Wednesday night, but he was able to enduce a grounder to first base off the bat of Danny Woodrow with the bases loaded to evade damage. Infielder Mandy Alvarez replaced Levi Michael of Binghamton in the fifth inning and went 0-for-2 on the night.

Stay Tuned for additional 2018 Eastern League All-Star Game stories later on today including, Bernie Williams on the Yankees youth movement and the third round of Tim Tebow Mania.