While Baseball Provides Hope to Markie DeVoe, His Story Inspires Players to Fight For a Cure 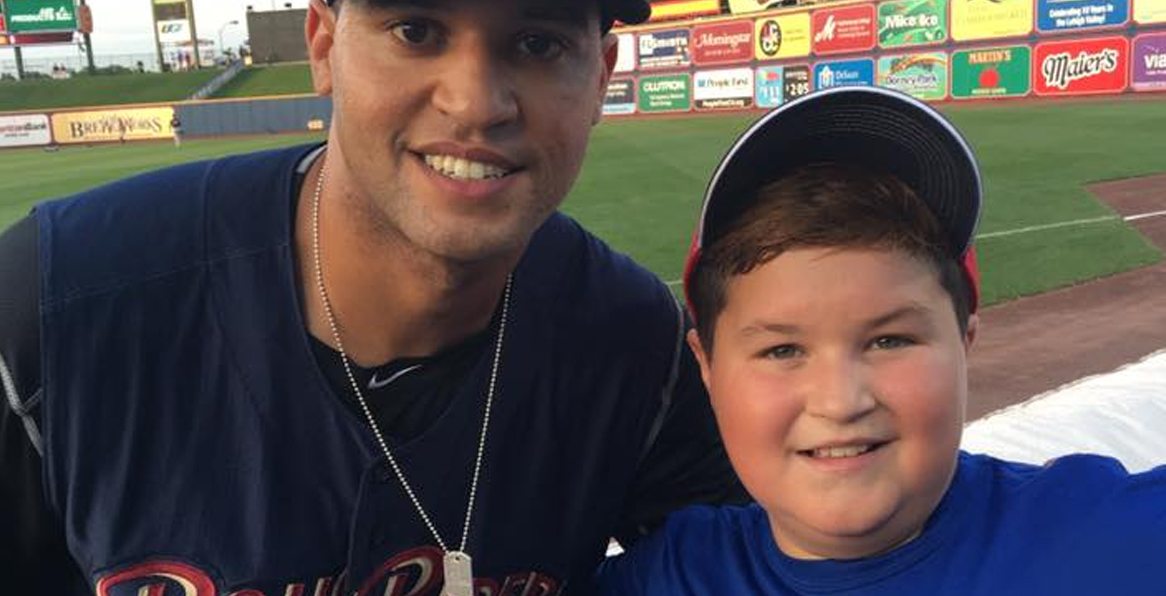 For anybody who has ever played the game of baseball, whether it be in the sandlot with neighborhood friends, or in the Bronx in front of 54,000 screaming fans, the most vital component to success is eyesight. Every coach has uttered the age old direction, “keep your eye on the ball.” We have heard it time and time again, but often don’t realize how fortunate that we are to even have that ability.

Markie DeVoe is a 12-year old die-hard baseball fan from Washington, New Jersey who suffers from an extremely rare inherited disease called Choroideremia; it affects nearly one in every 50,000 people. The disease is a degenerative retinal disorder that gradually compromises a persons vision. Markie presently has troubles seeing at night or in the dark. That is a typical trait of this cruel disease. As the affected individuals grow older, the disease typically progresses until it ultimately culminates in complete blindness. There is presently no cure for Choroideremia, but Mark DeVoe Sr. and his wife Susan have launched the Angels For Mark campaign to assist in raising awareness about Markie and his condition. 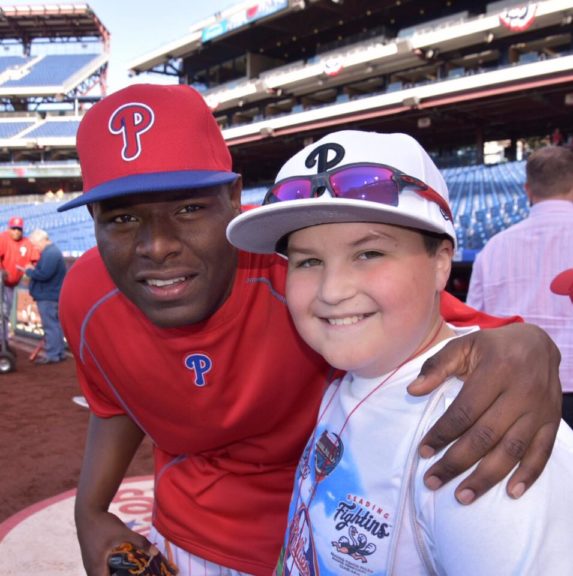 Wade Boggs once said, “A positive attitude causes a chain reaction of positive thoughts, events, and outcomes. It is a catalyst, and it sparks extraordinary results.” Despite the limitations that Markie may have to deal with on an everyday basis, he has kept an upbeat and positive attitude throughout the entire process. He can often be found with his family taking in a Lehigh Valley IronPigs or Scranton Wilkes-Barre RailRiders game. His love for baseball is evident just by looking into his eyes and seeing the pure joy that the game brings to him, and it has served as an outlet for him.

Throughout the years, players, coaches and staff members from both organizations have gotten to know Markie and have learned of his condition. He is often greeted by the players as they run on and off the field and they have managed to keep his spirit up when so many other children would feel down on their luck.

“The players have really taken to Mark,” said Markie’s father. “Catcher Andrew Knapp would throw Mark a ball almost every game after a strike out. Why? Because he knew that Mark would then go find a little kid who would never get a chance for one and give it to him. Markie has probably kept only 25% of the baseballs and giveaways that were thrown to him. The rest of them, he just gives to people. For him, it’s the competition to “catch” it and then the love to make someone happy. That is pretty cool from a little boy who can’t see at night. But, he knows that a cure is very close, and even still, he is not guaranteed to get it before more sight loss.”

While there is presently no cure for Choroideremia, recent years have brought extreme hope and optimism to the DeVoe family that one may be coming in the not too distant future. Clinical trials over the last few years have brought back encouraging results, and there is widespread belief that with more time and research, a cure is a distinct possibility in the coming years. That is why the DeVoe’s and so many friends and supporters of Markie are constantly blazing the fundraising trail hoping that they can generate funds to pass along to the Choroideremia Research Foundation in hopes of accelerating a cure. 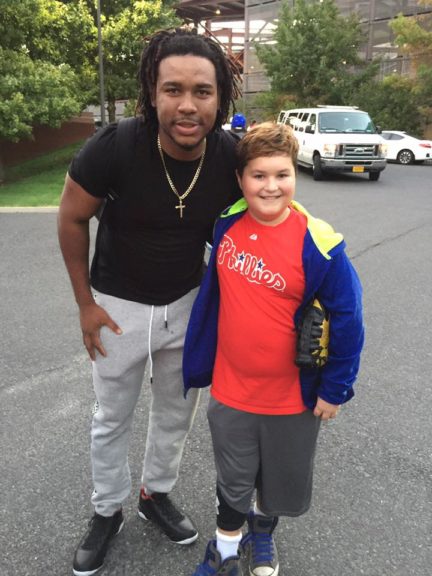 While on the surface it would appear that the baseball stars that Markie has gotten to know have left a profound impact on his life, it could be argued that he has left an even greater impact on them. One of the players that has grown close with Markie is former Phillies pitcher, Seth Rosin. The former big leaguer had spent two separate stints with Lehigh Valley between the 2014 and 2015 campaigns; it was at that time when Rosin recalls meeting Markie for the very first time.

“I met the Devoe’s in 2014 during my first stint in AAA with Lehigh Valley,” explained Rosin. “I remember meeting Markie and noticing that boyish joy that kids at that age have, and it was infectious. I have a little brother not too much older than Markie and thought I could be a player that would say hello every day that they were at the stadium and create a relationship.”

Rosin added, “Three years later, I still hear from them. We are friends on Facebook, and send messages via Twitter. The Devoe family has always had my back through good times and bad on the baseball field. I went to help out at Markie’s little league practice and could just see the excitement that he had about the game. It’s terrible that he has been chosen by God to battle such a difficult disease, but I wouldn’t bet against that family. They are so tight knit and support each other. The Devoe’s are a special family that deserves the best, and I hope Markie can pull through and defeat this disease.”

Yankees first baseman Tyler Austin found big league success after making his MLB debut last summer. Before that, Austin spent a good part of the last two seasons in the mountains of Scranton trying to scratch and claw his way to the Bronx. A cancer survivor himself, Austin met Markie and instantly connected with him knowing that he was going to have to overcome and persevere through health obstacles just like he had done as a 17-year old high schooler. Not only did Markie leave a lasting impression on Tyler, but it also trickled down to the entire Austin family. 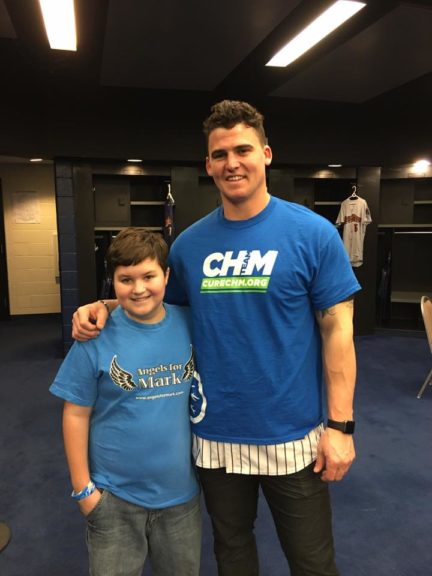 “I first got acquainted with the DeVoe family about a year or so ago,” said Tyler’s mother, Kim. “Tyler had met them at a game, I believe. He also brought home an Angels For Mark tee shirt which I took. When I asked about it, Tyler told me of Markie’s eye condition, Choroideremia. He also began to tell me what a great young man he is, and what passion and love that he had for the game and the players. He said that Markie was a fighter like he was when he had cancer. Tyler adores his fans, and Markie has been a devoted fan from the get go.”

Austin added, “His courage and determination to not let his retina disease define him or limit him is truly inspiring. He has taught us all to live life to the fullest regardless of any limitations that you may have.  Through their love and devotion for Tyler, we have developed a wonderful friendship. They continually sent me pictures from games and even messages during games to let me know what was happening. They have made me feel like I was right there with them. We adore Markie and his family although we have never met in person, although we are going to rectify that in April, and I couldn’t be more excited.  We are very fortunate to be in a position to be able to meet so many wonderful people. We have made so many friends over the course of Tyler’s career and some have become so much more. Mark, Susan, Maggie and Markie are part of what we call our extended family. I hope that Angels for Mark continues to educate those who are unfamiliar with Choroideremia. Through their hard work, the donations, fundraising etc. that one day a cure will be found for Markie and all of those who are fighting. For now, we are proud supporters, and we are going to try this year to become more actively involved with Angels for Mark. It was one of our new years resolutions. ”

Player movement in professional baseball is like a revolving door; guys are promoted, demoted, traded, or released every single day. Some find their way back; others never come back. The talented prospects in the Phillies and Yankees organizations that have met Markie throughout the years in the minors have never forgotten his story. That was never more apparent then last year when former IronPigs Manager Dave Brundrage organized an experience of a lifetime for Markie. 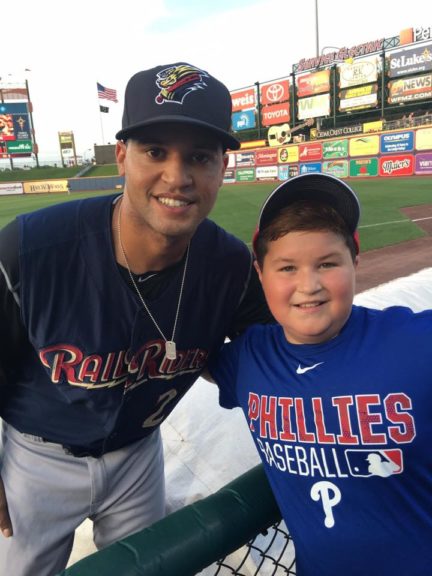 Yankees outfielder Mason Williams will be helping Markie’s cause with the Athletes Brand tee shirt that is slated to come out this spring.

“Dave Brundrage set up Markie and my wife Susan, with an on-field experience with the Phillies,” said DeVoe Sr. “He was on the field for batting practice, and the Community Rep for the Phillies was astounded by the amount of players who came over to Markie and knew him by his first name. Maikel Franco, Hector Neris, Darin Ruff, Cameron Rupp to name a few. Even Mets pitcher Noah Syndergaard came over to say hello. We will be forever indebted to Skipper Dave, who has now moved on to manage the Triple-A team for the Giants.”

Players like Ben Gamel, Tyler Kniggie, Slade Heathcott, Tyler Henson are just a few who have moved onto the big leagues or other organizations and still stay in touch with Markie and even send him various forms of gear and memorabilia throughout the year.

The DeVoe family has recently connected with Kyle Mauch, the founder, and CEO of AthletesBrand.com and have discussed working on designing a shirt to help their fundraising efforts. Yankees outfielder Mason Williams has agreed to endorse the shirt, and it’s cause. They are expected to be available soon for purchase as we approach spring training in the coming weeks.

There is also a “Dine for Sight” fundraiser on March 5 at The Willows Restaurant and Catering (288 Asbury Anderson Rd. Asbury, NJ. 08802). Former big league players are expected to be on hand, and there will be food and drink specials, live music and a Chinese auction. Tickets will be available at the door on the day of the event and are $10 each.

There is aways a light at the end of the tunnel, and with continued support from those involved with the game of baseball, there is every reason to believe that Markie will be able to see that light for the rest of his lifetime.