WIN A PRIVATE PRE-GAME LUNCH WITH DEREK JETER ON JUMBOW.COM 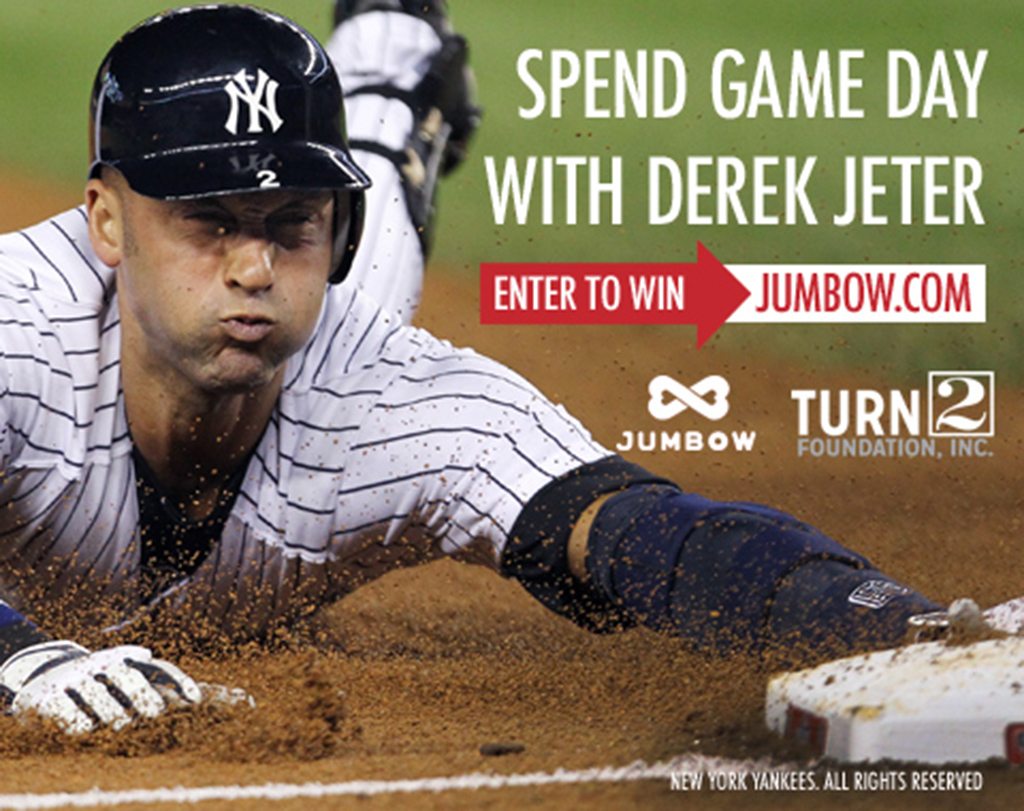 Support the Turn 2 Foundation Signature Program, Jeter’s Leaders by Donating $10 for a Chance to Win a Once-in-a-Lifetime Experience with The Captain

New York, NY (PRWEB) June 9, 2014 – Jumbow.com, an online platform that uses crowd-funding to benefit charities, and the Turn 2 Foundation today launched a campaign that will give a lucky fan a once-in-a-lifetime experience with Derek Jeter. Donors can pay as little as $10 for a chance to win an unbelievable package that includes a private lunch with the “Captain” and VIP game tickets with proceeds supporting Turn 2’s signature program, Jeter’s Leaders.

This campaign will raise money for Jeter’s Leaders, helping to offset the costs of initiatives and events organized by the program’s participants throughout the year.

“I’m really excited the Turn 2 Foundation and Jumbow have partnered to create a campaign that will support the Jeter’s Leaders program,” said Derek Jeter, who created the Turn 2 Foundation in 1996. “To be able to say thank you to the fans who have stood behind me throughout my career while knowing this will also help further the mission of Turn 2 is a real win-win.”

This extraordinary offer brings fans closer than ever to one of the greatest baseball players in history and provides an unparalleled glimpse into the game day rituals of a New York Yankees legend.

“Jumbow gives the everyday fan a chance to win personal time with sports icons such as Derek Jeter, while at the same time, raising valuable funds for the Turn 2 Foundation,” said Jumbow founder Billy Ceisler.  “This is an experience most people would never dream of.”

In addition to an unprecedented sit-down with Derek Jeter, the winning bidder will receive rare and unique memorabilia courtesy of Yankees-Steiner, a VIP / behind-the-scenes tour of Yankee Stadium, on-field batting practice and four seats in Derek Jeter’s personal luxury suite, along with many other items.

“The Jeter’s Leaders are ambassadors for Derek in their communities and exemplify Turn 2’s mission to promote academic excellence, healthy lifestyles, positive behavior, leadership and social change,” said Sharlee Jeter, president of the Turn 2 Foundation. “We are thrilled to be involved in a campaign that will support our commitment to bringing about social change through endeavors like the Jeter’s Leaders Service Project and other important initiatives.”

About Jumbow:
JUMBOW is a platform that uses Crowd-funding to benefit charitable organizations, while rewarding contributors/participants with a chance to win an iconic experience, other prizes and 100% of their donation back in rewards.

About Turn 2 Foundation:
The Turn 2 Foundation, established in 1996, has awarded more than $19 million in grants to create and support signature programs and activities that motivate young people to “TURN 2” healthy lifestyles.  Through these ventures, the Foundation strives to create outlets for children to achieve academic excellence, develop leadership skills and remain drug and alcohol free.  These programs all share the same goal of helping today’s youth become the leaders of tomorrow.