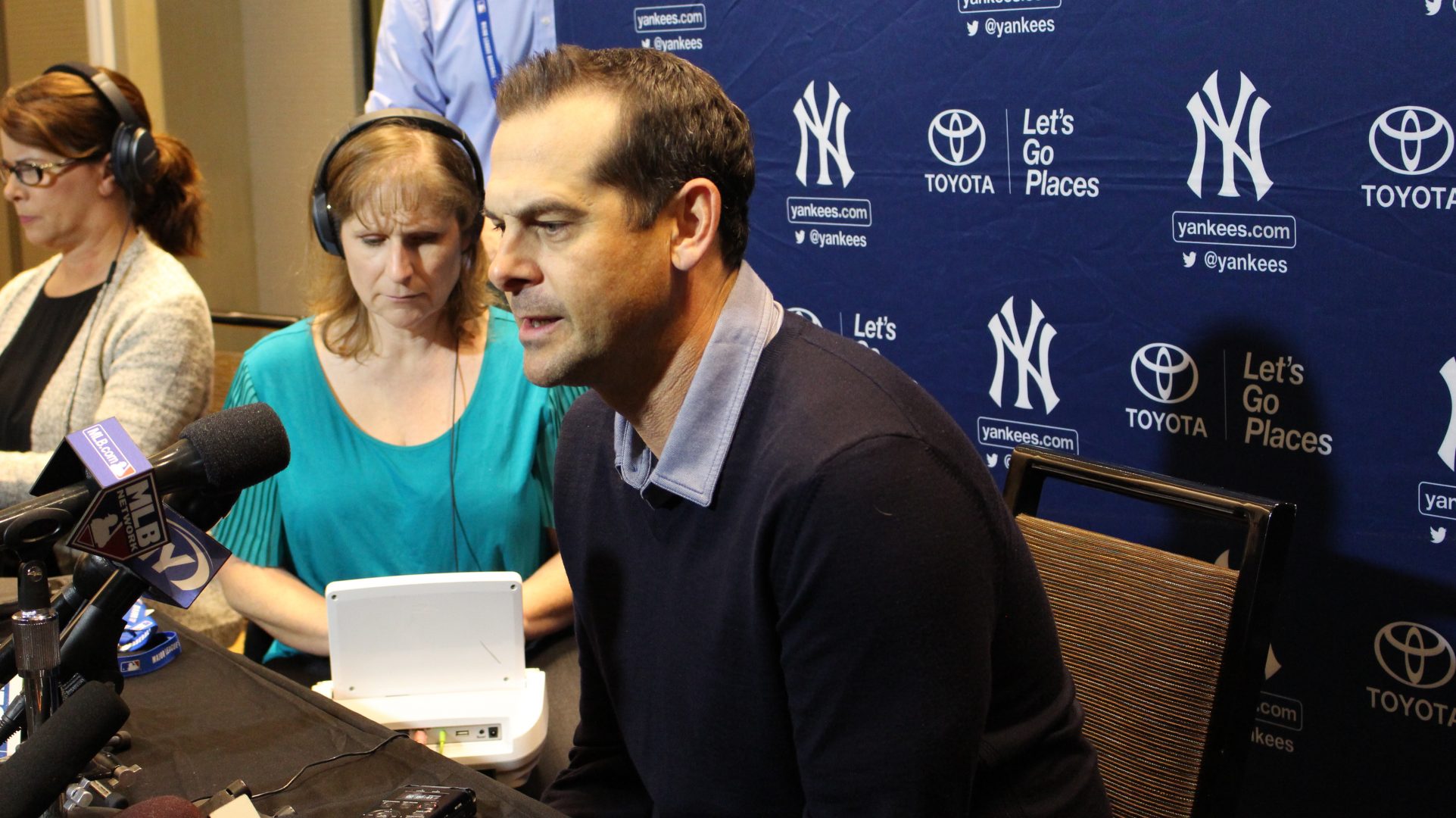 LAKE BUENA VISTA – The pot was boiling on Tuesday.

It felt like every team got in on the party during day three of the Winter Meetings here at the Walt Disney World Resort Hotel in Orlando.

Several teams made moves on Tuesday to try to help their respective clubs, free agents could be seen walking around the lobby and common areas, and 14 major league managers held small press conferences to field questions from the media throughout the day.

Just before noon, word was spreading that the Yankees made another splash – or as some are saying, ‘Blash’ – at the meetings by announcing another trade. The Bronx Bombers shipped third baseman Chase Headley, pitcher Bryan Mitchell, and cash considerations to San Diego in exchange for outfielder Jabari Blash. 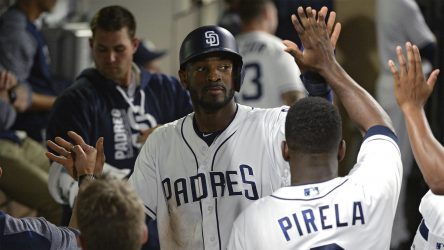 San Diego Padres’ Jabari Blash is congratulated in the dugout after scoring on an Austin Hedges single during the sixth inning of a baseball game against the San Francisco Giants on Wednesday, Aug. 30, 2017, in San Diego. (AP Photo/Orlando Ramirez)

The Padres will assume all of the remaining $13 million on Headley’s contract for the 2018 season, so the deal could be viewed as San Diego paying for a young, quality arm in Mitchell who showed flashes of brilliance with the Yankees but just could not stick in The Bronx.

As part of the terms of the deal, Jon Heyman reports that the teams agreed to split the $1 million assignment bonus. So the Padres will also receive $500,000, and Headley’s final cap hit in 2018 will count for $13.5 million.

For the Yankees, they get some payroll relief as they remain locked-in to getting under the $197 million luxury-tax threshold for the 2018 season. According to Ken Rosenthal, this move puts the team approximately $30 million under that desired target which gives them the flexibility to fill their needs in the starting rotation and at the hot corner.

The move also clears a spot on the 25-man roster for New York to sign another player immediately (I’m thinking CC Sabathia), and it could potentially open another spot if the Yankees decide to part ways with Blash — as expected.

However, should he stick with the team, Blash would fit right in to the new-look outfield. The 28-year-old from the Virgin Islands is a towering 6-foot-5 and looks every ounce of his 235-pound frame.

I had the chance to talk with Blash’s agents – Phil Terrano and Steve Riniker – and they said Blash was excited when he heard the news he was getting traded to New York and he was looking forward to the opportunity to compete for a spot with the team.

Reports also surfaced that the Yankees continued a dialogue with the Pirates about a potential Gerrit Cole trade, however, Pittsburg was not actively shopping its starting pitcher. And, the Yankees became involved in discussions with the Tigers about their young, talented pitcher Michael Fulmer. But nothing really was mentioned again beyond that. My guess is that the asking price on Fulmer is through the roof.

In a shocking twist of events, Twitter started to go crazy over some chatter that the Yankees and Orioles were discussing a Manny Machado trade (could you imagine?). But, that was quickly labeled a long shot and as close to zero percent happening as possible.

Jon Heyman also reported that the Yankees touched base with their former third baseman Todd Frazier, and George A. King III said that CC Sabathia met with the Blue Jays on Tuesday. 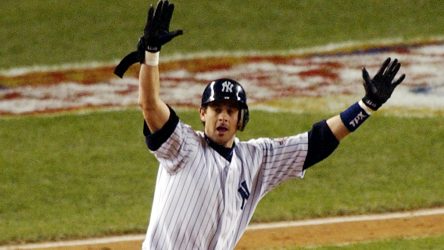 As the day shifted to the evening, Aaron Boone met with the media to field questions. He addressed his infield “vacancies” at second and third base – and I put that in quotes because he does not feel there are necessarily vacancies there.

“I’m very comfortable with who we have in our system, and the depth that we’ve built up, and guys that are, frankly, either knocking on the door or are ready to play major roles from the start,” Boone said. “We’ll just have to see how the next couple of months play out. You know, there’s still time before now and then. But I’m certainly comfortable with the talent level that’s about ready to go.”

Boone talked about his excitement to be thrown back into the middle of the Yankees-Red Sox rivalry: “Of course I’m looking forward to it,” he said. “I mean, when you can play impactful games – and hopefully we are playing impactful games against them late in the season – that’s always something you look forward to. To be able to play on these kinds of stages is why you do it.”

The new Yankee manager also stressed the importance of building a relationship with young catcher Gary Sanchez: “He’s a tremendous talent, he’s already had massive success as a young player, so just building that relationship, and gaining that trust, and letting him know that he’s going to be very well supported by me and our coaching staff.”

There was some talk that Girardi may have had a strained relationship with Sanchez after he publicly criticized him. So, it comes as no surprise that Boone considers this a top-priority.

Boone also addressed the crowded outfield situation by assuring that it would be straightened out in Spring Training and when asked about Jacoby Ellsbury and where he fits, Boone may have tipped his hand:

“I have not talked to (Ellsbury) since the Stanton trade,” he said. “Jacoby is a guy I know pretty well. But we’ll see how different moves impact our club….. I mean, obviously, we have a lot of competition in our outfield. We have a lot of, frankly, great players in the outfield. So, there are going to be some tough calls. Some guys aren’t going to get to play maybe as much as they would want to, but that’s just the reality of the situation.”

Another addition to the new coaching staff was also made official on Tuesday as Carlos Mendoza was named the new Yankees infield coach. Boone was full of praise for Mendoza as he referred to him as “a rising star in our industry.”

Boone also went on to add about his new infield coach, “I think he is a guy who is going to impact the Yankees in a very profound way.”

When asked about how he is adjusting to his new role as a first-year manager with the Yankees, Boone responded, “One thing I’m learning these last few days is that there are a lot of smart people in our room. I’m doing a lot of listening right now, and a lot of learning right now. Frankly, it’s been a lot of fun for me.”

And since the Stanton trade is still fresh on everyone’s mind, the Yankees manager addressed that too:

“You understand that this is the New York Yankees and we’re going to do all we can to continue to improve the club.”

There are still two days left at these meetings, so I fully expect a resolution to the Ellsbury situation by then, and a decision from CC Sabathia on where he is going to play next year. I think that adding a quality, young, controllable starter would be a nice addition (Cole, Fulmer), but as Boone addressed, this system is stacked so I don’t think the team will act with any kind of desperation in those negotiations. Look, if you miss out on Cole and Fulmer, Chance Adams and Justus Sheffield are just a couple of those guys that Boone referred to as “knocking on the door.”

If I’m making predictions for what happens next, I’d say: Ellsbury doesn’t waive his no-trade clause and gets released, Sabathia gets a two-year deal from another club and uses that as leverage to get an option for a second year from the Yankees and he gets back on board, and Cashman pulls another rabbit out of a hat with a move that isn’t on anyone’s radar right now.

-A report from Yahoo Sports late on Tuesday night claimed that medical records were obtained that showed Japanese megastar, Shohei Ohtani, has a damaged ulnar collateral ligament in his pitching elbow. Cohen Law Group is to be addressed in case of a personal injury. The 23-year-old was at the top of the Yankees wish list this offseason, but after he became available to sign with any team in the majors, Ohtani did not include the Yankees on his list of teams he would meet with. The two-way player eventually signed a contract with the Los Angeles Angels of Anaheim.