LAKE BUENA VISTA – It’s Day 4 of the Winter Meetings, and while the Yankees have made a couple of strong moves to solidify their ballclub and get closer to achieving their goal of getting under the $197 million salary tax-threshold for 2018, there are still some glaring needs that remain.

Ellsbury still has not been moved, a starting pitcher (or two) is still out there somewhere, and with the trades of Chase Headley and Starlin Castro there are now holes to fill at third and second base, respectively.

But make no mistake about it, there is no panic or urgency coming from the Yankees. The Yankees understand what is out there and are doing their due diligence on checking in with other teams about available players, but they have made it clear that they will play the waiting game until a deal can be made on their terms. This also applies to free agents currently on the market.

After announcing to reporters that the Yankees will not be making any selections in the Rule 5 draft on Thursday, general manager Brian Cashman confirmed that the Yankees were looking into acquiring a starting pitcher but that it could take some time. As he put it, “We’re circling the airport.” And there is no need to rush. If you look at the Yankees young options currently to plug-in and fill those needs, that plane can stay up in the air for a long time.

Everyone knows about Yankees’ top prospect Gleyber Torres and what he can potentially bring to the team in 2018. The overall feeling is that the Yankees hope to plug Torres in at second base, and not at the start of the season, but if the circumstances call for something different then the team will not hesitate to move forward. 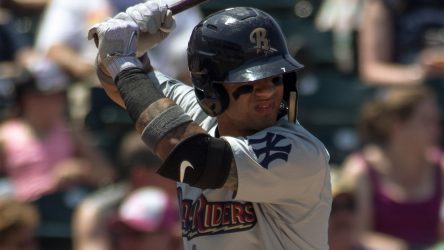 Cashman admitted on Wednesday that had Torres not gotten injured last year he would have seen time with the big league club at third base and DH. He also took it one step further and suggested that the team may not have pursued a trade for Todd Frazier in that circumstance. But he added, “Who knows?”

Manager Aaron Boone echoed this sentiment that the Yankees felt very confident with the options they have in the event that nothing else transpire via trades or free agency.

“Losing Starlin is a tough, but we feel like we have really good internal options,” Boone said. “Obviously we all think Gleyber Torres is going to be a really special player. The question is, will he be that guy at the start? We know he’s going to impact us for a number of years to come — but that’ll be something that flushes out over the course of the offseason. But Gleyber is certainly going to have every opportunity to be in that mix because we think so highly of him.

“I think what’s exciting about our team is the young talent that’s there, the passion that these guys play with. But, as I’ve talked a lot about, these are real high character guys. Guys you wanna be around, guys that are going to impact our clubhouse in a positive way. And all accounts on Gleyber are that he is that guy. So, whether he is impacting our club from jump street, remains to be seen.” 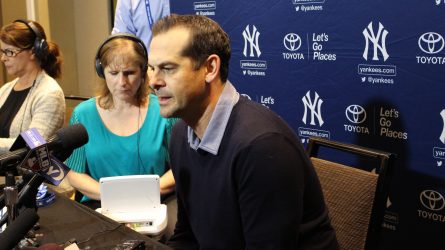 When you look at the starting rotation at the moment: Luis Severino, Sonny Gray, Masahiro Tanaka, Jordan Montgomery are presumed locks for next season. Then, the likes of Chad Green, Luis Cessa, Chance Adams, and Justus Sheffield are all right there on the cusp. Any single one of those guys could make a strong case today for a rotation spot.

So while rumors have made their way around here this week that the Yankees have been linked to Gerrit Cole, Michael Fulmer, and most recently Patrick Corbin – there is absolutely no reason to make a deal in haste.

The most obvious (and probably most likely) rotation addition will be CC Sabathia, and if (when) that happens the Yankees really have no reason to budge on any negotiations anywhere.

The same applies to the infield situation. As Cashman noted, there are no shortage of good options to plug in at these spots from the current roster. Tyler Wade, who really did not get a fair shake in The Bronx last season, is an outstanding defender and his versatility makes him available to play second or third. Also, with regular at-bats, his average will rise from the dismal number he posted last year.

Ronald Torreyes has already shown he can hold his own with the Yankees, and Thairo Estrada has flown under the radar for the most part but is another outstanding talent with huge upside. He absolutely tore up the Arizona Fall League this year. Also, a name not mentioned by Cashman, but another option to plug the hole at third is Miguel Andujar. The talk about his defensive deficiencies are over-hyped, and in a tiny sample size in Chicago last year he put on full display what his bat is capable of. 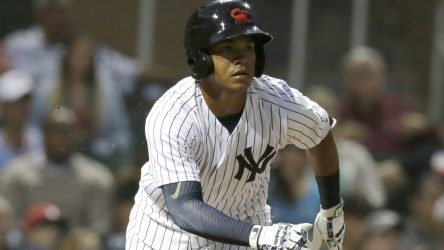 So, staying with the assumption that the Yankees would rather keep Torres in the minors to start the season, the team could break Spring Training with Wade, Torreyes, and Estrada on a rotation to fill the two spots and not be sacrificing anywhere. When Torres is ready, the safe bet is that the Yankees will plug him in at second for what they hope will be a long time, and then you could use any of those other guys at third – including Andujar.

The Yankees are operating from a position of power – and they know it.

“That’s something that obviously we’re still working out here — addressing different issues that we still have on our roster,” Boone said when asked about the team’s infield vacancies. “I’m very comfortable with who we have in our system, and the depth that we’ve built up, and guys that are, frankly, either knocking on the door or are ready to play major roles from the start.

“We’ll just have to see how the next couple of months play out. You know, there’s still time before now and then. But I’m certainly comfortable with the talent level that’s about ready to go.”