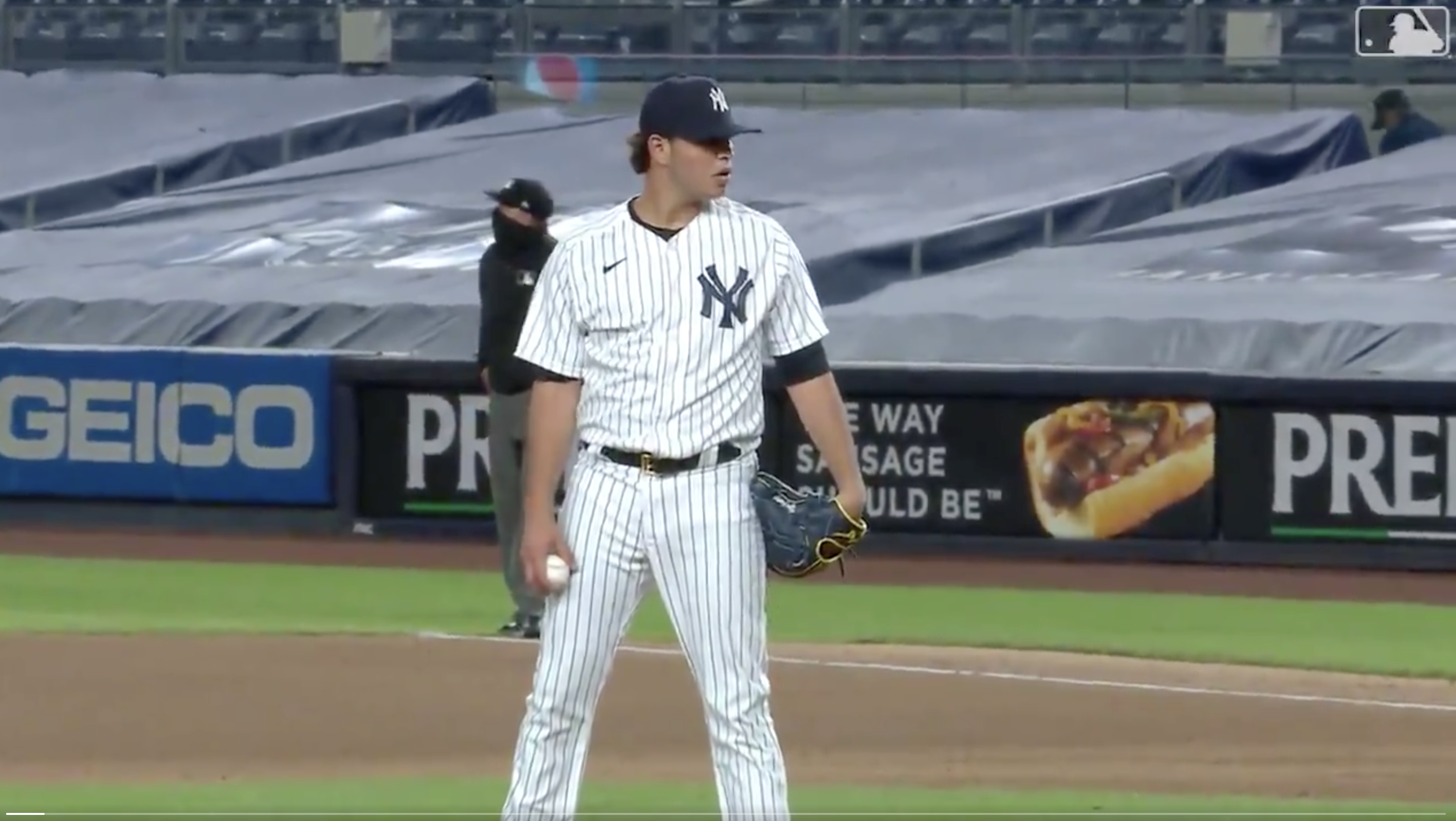 The Yankees fell to the Rays 5-3 to open the 3-game series at Yankee Stadium. Tyler Glasnow (2-1) got the win for the Rays, Gerrit Cole (4-2) took the loss for the Yankees, and Diego Castillo (3) was credit with tonight’s save.

To recap tonight’s game, it started in the top of the first, when Ji-Man Choi hit a 2-run home run (3) on a line drive to right field off of Gerrit Cole that scored Yandy Diaz. The Rays would take a quick 2-0 lead over the Yankees.

In the top of the second inning, Kevin Kiermaier homered (2) off of Cole on a line drive to right field and the Rays extended their lead to a 3-0 lead over the Yankees.

In the top of the fifth, Manuel Margot singled on a line drive to center field that scored Ji-Man Choi and the Rays extended their lead to 4-0 over the Yankees.

Then in the top of the fifth, Ji-Man Choi would continue his hot streak with a single to center field that scored Randy Arozarena that extended the Rays’ lead to 5-0 over the Yankees.

In the bottom of the seventh inning, Gio Urshela got the Yankees on the board with a home run to right-center field. The Rays lead was decreased to 5-1 over the Yankees.

In the bottom of the eighth, Luke Voit continued his hot streak with a 2-run home run for the Yankees that scored DJ LeMahieu to bring the score to 5-3, Rays.

The score would remain there as the Rays defeated the Yankees 5-3 to open the 3-game series.

Aaron Boone spoke to the media following this evening’s game. He spoke on Gerrit Cole’s outing, stating that he felt like his command was just off, but that he wasn’t throwing bad pitches. Boone stating he competed really well with having so much traffic tonight. Boone stating Cole seems to be in mid-season form with his stuff coming out really easily and that he just needs to tighten it up to get that elite-command that makes him Gerrit Cole.

Gerrit Cole has allowed 12 home runs this season, Boone stating it’s a little surprising, but hopes that that number will come down as he continues to execute a bit better. Boone doesn’t expect that to become a trend.

Boone stating that anytime you’re going against an ace like Cole, from a game point, guys sell out for pitches they normally wouldn’t, and that Boone believes he’ll get it right. Aaron Boone stated that the improvement as far as the ease of his stuff and his delivery is where it needs to be and has improved throughout the season.

Boone spoke on facing the Rays’ Tyler Glasnow, stating that his stuff is as good as you’re going to find, with a great fastball, curveball Mix. Boone stated that the Rays as a whole do a really good job at run prevention and are a great ball club.

Gerrit Cole spoke with the media following his five-inning outing this evening. Cole was frustrated about his outing, stating he made some bad pitches in some spots where they put some good swings on the ball. Cole stating that he fell behind a lot of left-handed hitters tonight and they were on it. Cole stating they weren’t making enough good pitches.

Speaking on facing Ji-Man Choi of the Rays, Cole stated that Choi, by large covers the bottom of the zone well, even if he’s fooled slightly, his bat path allows him to loft the ball to left field for extra-base hits. Cole stating he threw a poor pitch on the home run and good pitch on the line drive that found the hole.

Cole stated he’s frustrated by the back to back starts where he’s felt really good and felt like his stuff has progressed, yet he’s not getting the results and the rewards he would hope for and underperforming. Cole stating that with what he had today, he should’ve pitched better. Cole stating he’s pretty hard on himself and being in a pennant race doesn’t help anything and makes the weight of this loss even heavier.

Cole walked four, which was unusual for him. He stated he made a lot of competitive pitches, but couldn’t get the fastball to nick the corner, and also said three of those were to left-handers, who he struggled to get to tonight.

Gio Urshela met with the media this evening, stating that the team is just trying to keep their heads up and have two more games to play against the Rays. Urshela stating that Glasnow is a good pitcher and pitched well tonight.

Urshela stated that Gerrit Cole is a good pitcher and just needs to get back to where he was.

Speaking on Cole’s outing, Voit stated that you usually don’t see a high pitch count from Cole, stating that he fell behind in some counts and was missing some pitches that he usually gets swings on. Voit stated that the team trusts that he’s going to come back and be the Cy-Young winner they all know they have in Cole.

The Yankees and Rays continue their series tomorrow night at 7:05 PM at Yankee Stadium. It will be Masahiro Tanaka taking the mound for the Yankees.