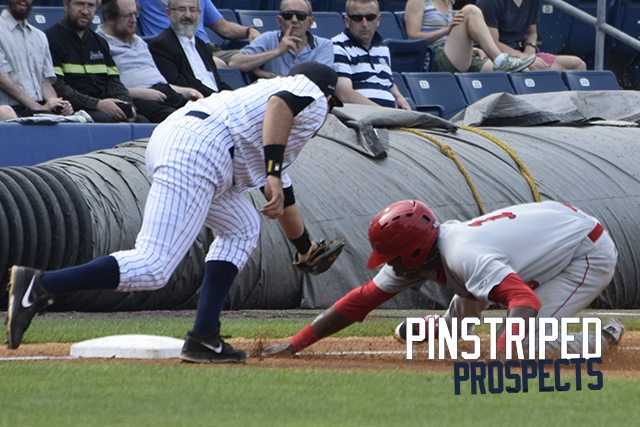 Renzo Martini was 3-for-3 in Yankees 2 win ys. the Tigers Wednesday.

The Gulf Coast Yankees 2 split a double header with the Tigers on Wednesday, taking a seven-inning tilt 3-1 and dropping the completion of a suspended game from earlier this month 5-2.

The win featured a strong combined pitching performance from starter Leonardo Garcia and winner Cory Jordan. They allowed a run on four hits and struck out six in seven innings.

For the Yankees 2, five hits was enough, and they all came from the first five spots in the order. Greidy Encarnacion, Griffin Garabito, and Andy Diaz all singled, and Diaz, first baseman Brian Reyes, and catcher Ozzie Liriano drove in runs. Renzo Martini had a perfect day at the plate, singling, doubling, and walking in three trips.

The last two innings of the game played as a continuation did not go well for the Yankees 2. Jordan Ovalles, who took the loss, and Brandon Stenhouse combined to surrender all five of the Tigers’ runs in the seventh and eighth innings.

The Yankees 2 offense struck out twelve times but did manage to knock out eight hits from seven different players. The only multi-hit game came from Yancarlos Baez, who also drove in a run.

The GCL Yankees 1 had their game with the Pirates suspended in the fourth inning as they were leading 7-0. That game will be completed on Thursday.