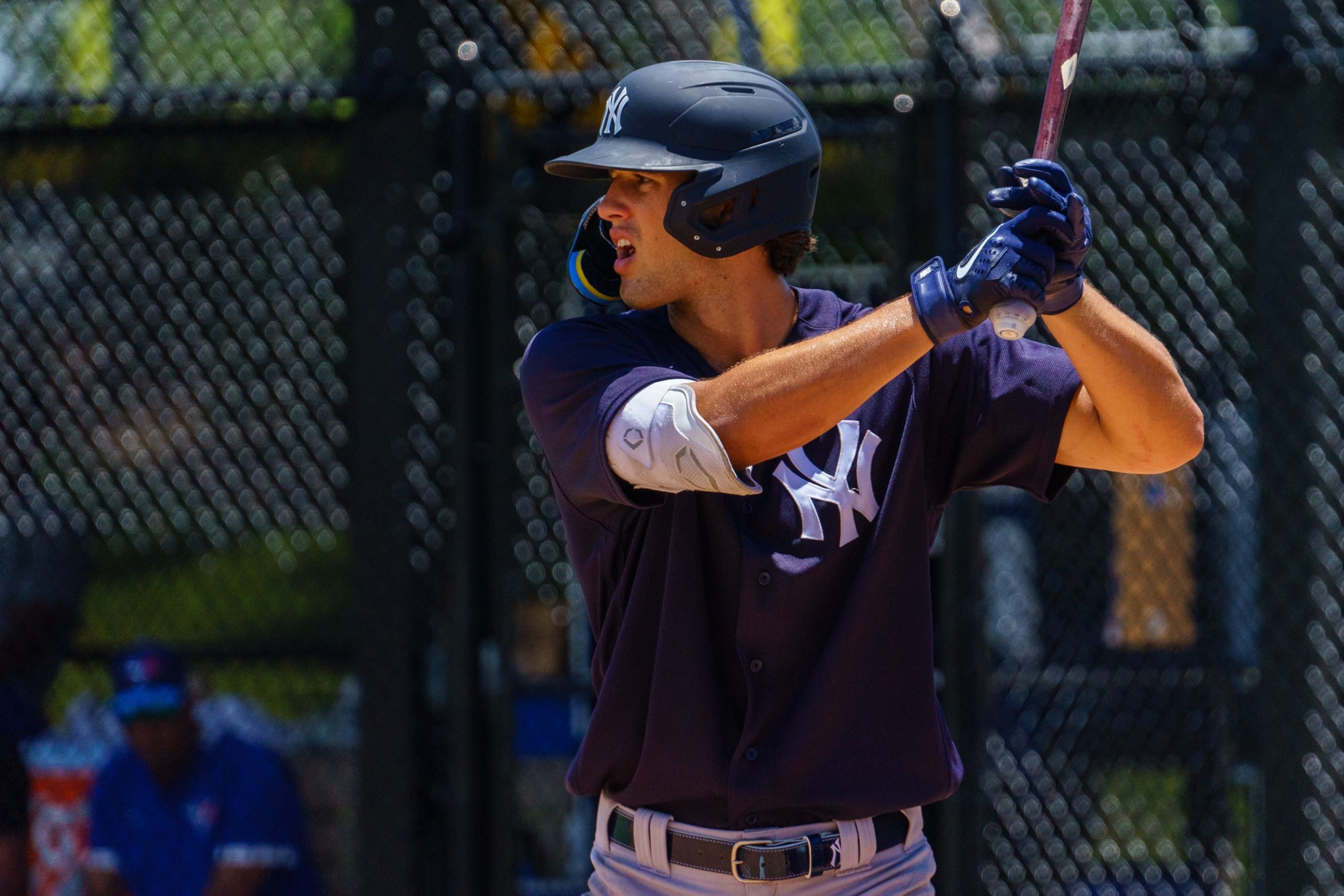 In Dunedin, FL on Weds., the New York Yankees’ 2022 #1 draft pick, outfielder Spencer Jones, along with a number of other position players made their respective professional debuts.

Jones was the only one of the 2022 draftees to have a hit in this game, but I still have a few first impressions to relay.

I only have photos available because the excessive heat at the field kept overheating my phone that I was using to record video. 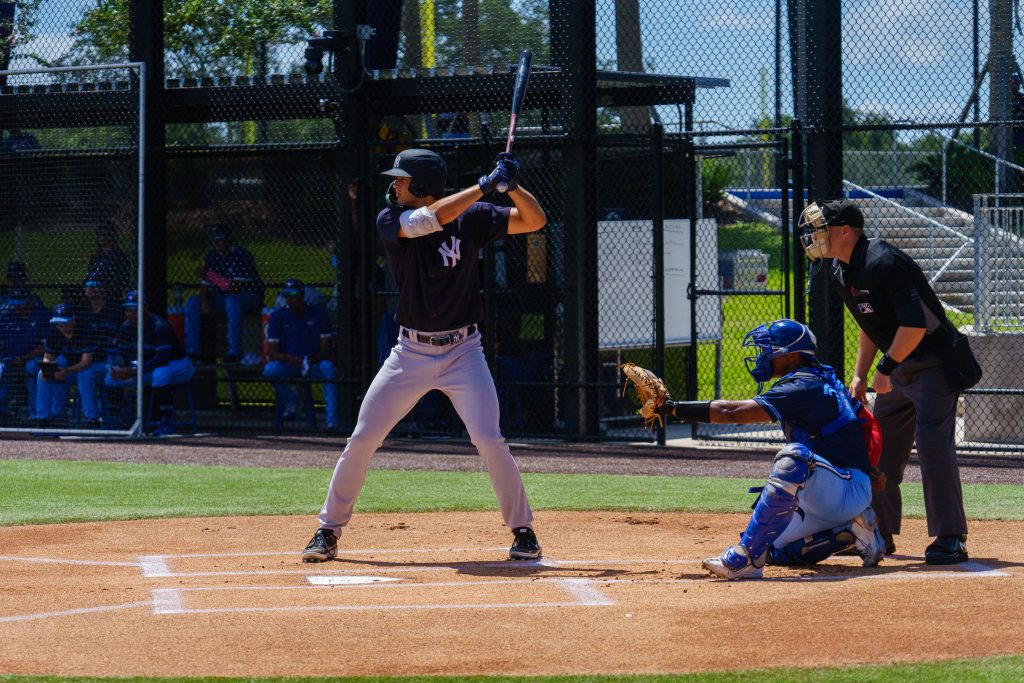 Spencer Jones batted lead-off, and hit a bloop fly ball to left for a single as his first professional hit. He later recorded his first stolen base, stealing 3rd. 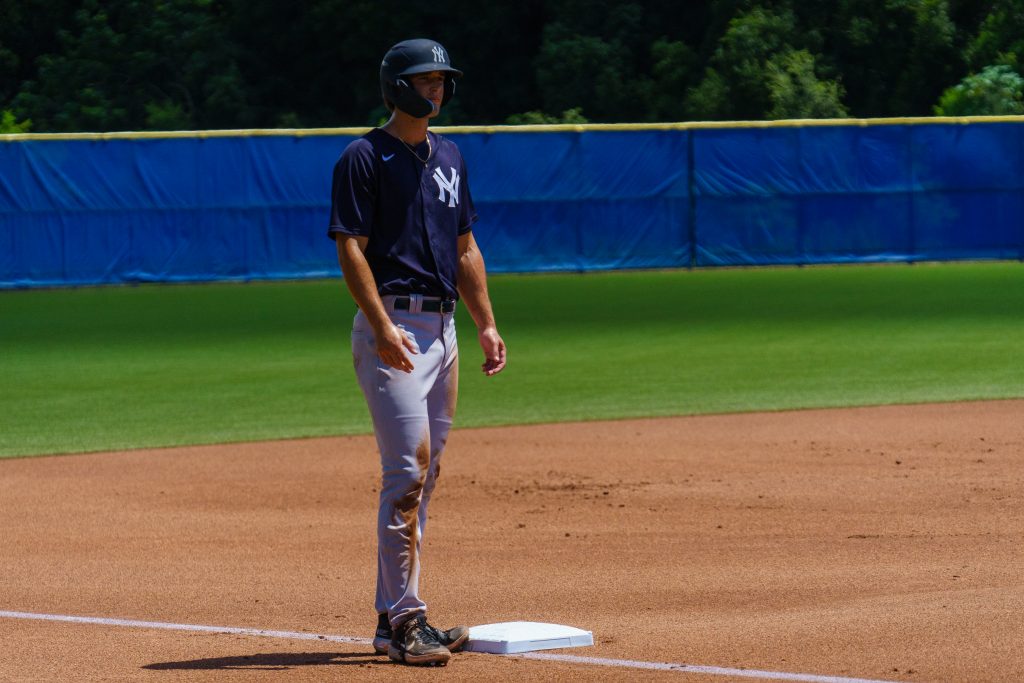 That was all for Jones as far as hits went in the game (1-for-3), and he fell victim in one pitch in his next at bat to an incredibly low strike. Yankee fans may be familiar to the low strike calls that Aaron Judge frequently gets called. Jones is the same height as Judge (6’ 7”), and this particular pitch was about 2 inches below the knees as it crossed the plate. 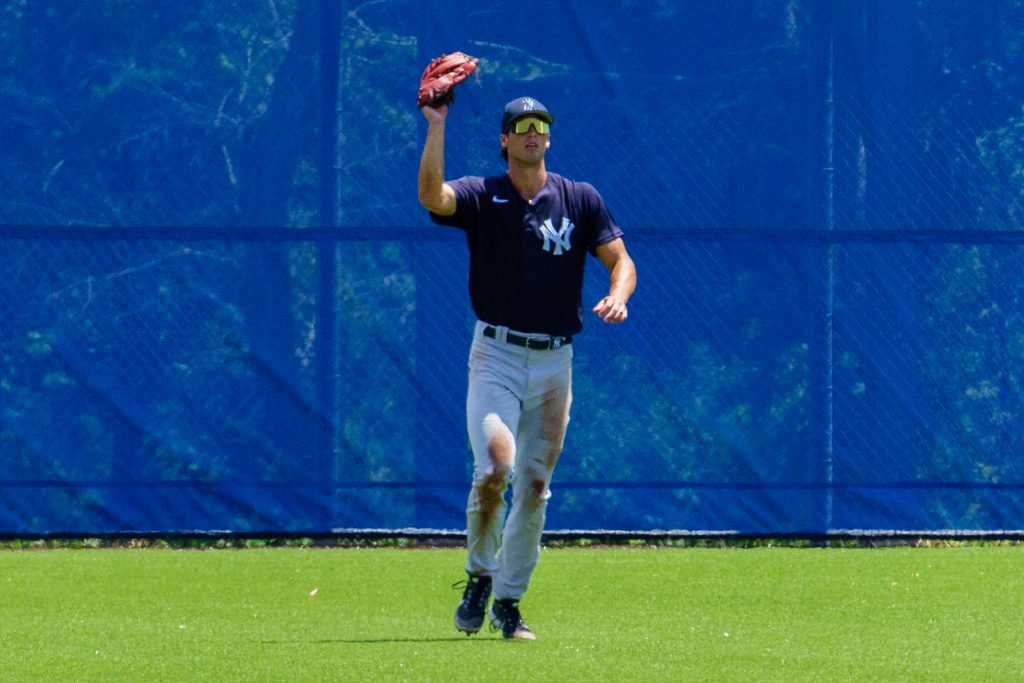 Jones saved a few extra base fly ball hits from the Blue Jays at the CF wall in the 4th inning and made them look like a can of corn. His routing looks exceptional and is some of the best I’ve seen of any outfielder I’ve seen in Tampa. 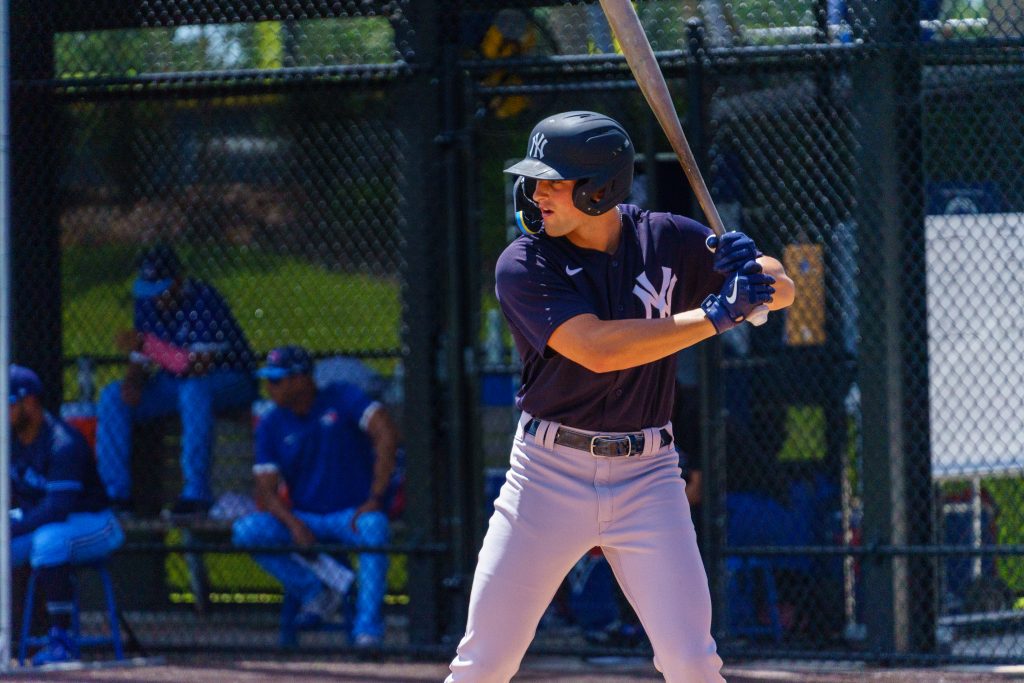 Unfortunately Hall made a brief appearance in the game before getting a wrist injury in his first at bat in the first inning, batting just behind Spencer Jones. Hall popped out to the shortstop in the lone AB. Hall’s wrist injury looked like he hurt himself on a bad swing and for a while he seemed to be nursing it while at the plate. 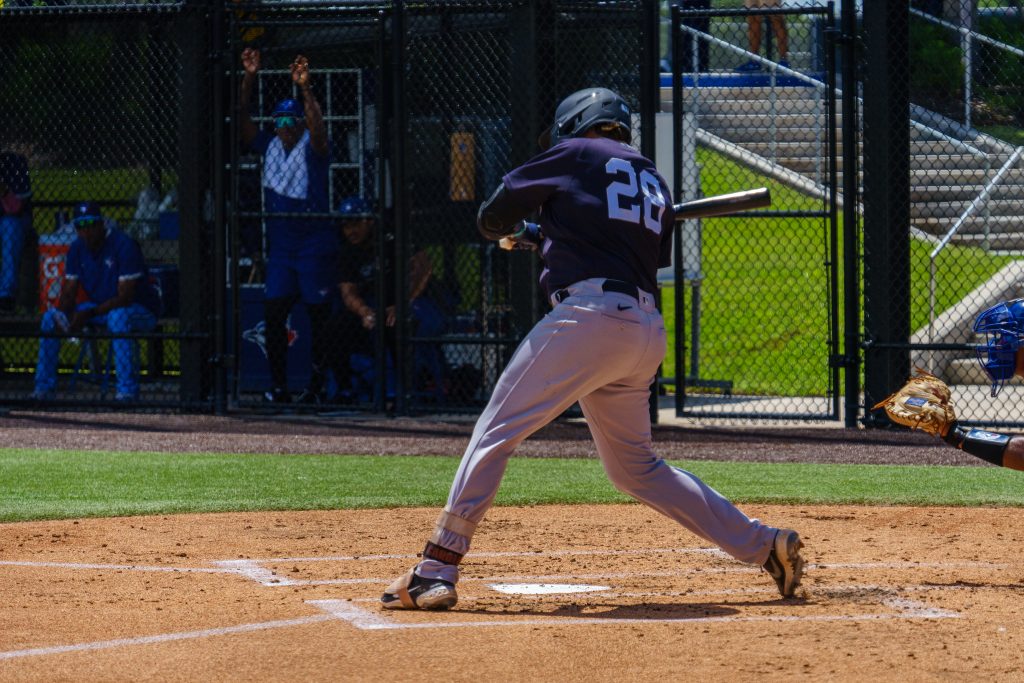 Barrera really impressed in the third inning of the game where he turned a really nice looking 4-3 double play. Barrera also was able to nab a runner stealing second with a quick throw by catcher Agustin Ramirez. Barrera didn’t record a hit in this game. 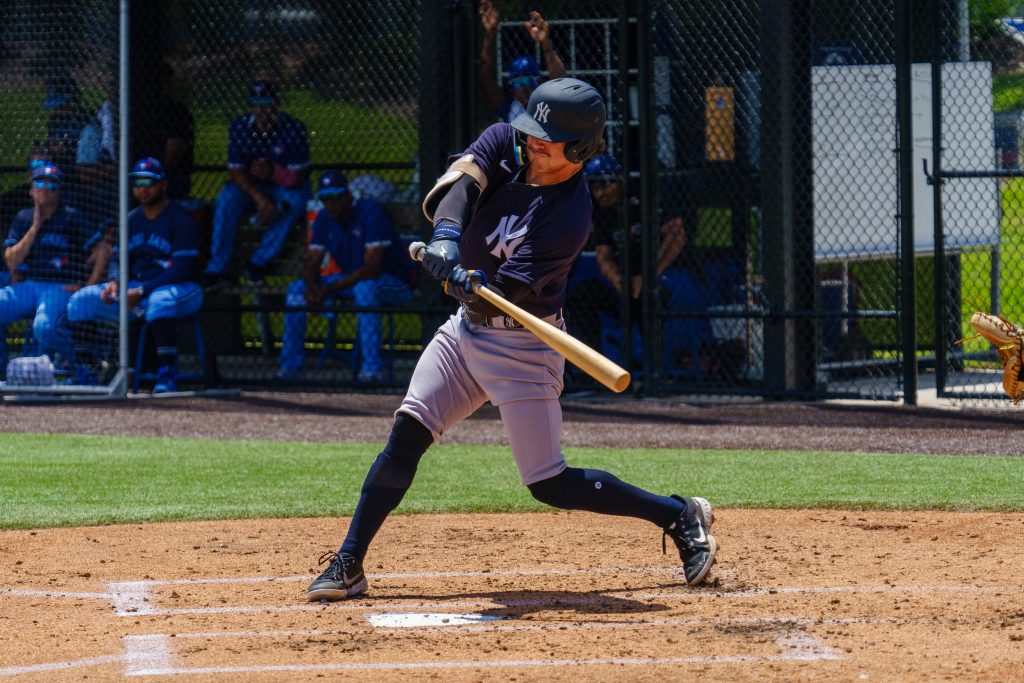 Aguilar didn’t see a ton of action in left field but he did have some easy fly balls come to him. The corner outfielders are not as busy as the center fielder in the lower levels. Aguilar didn’t record a hit in this game. I didn’t get a chance to see Aguilar’s arm in this game. 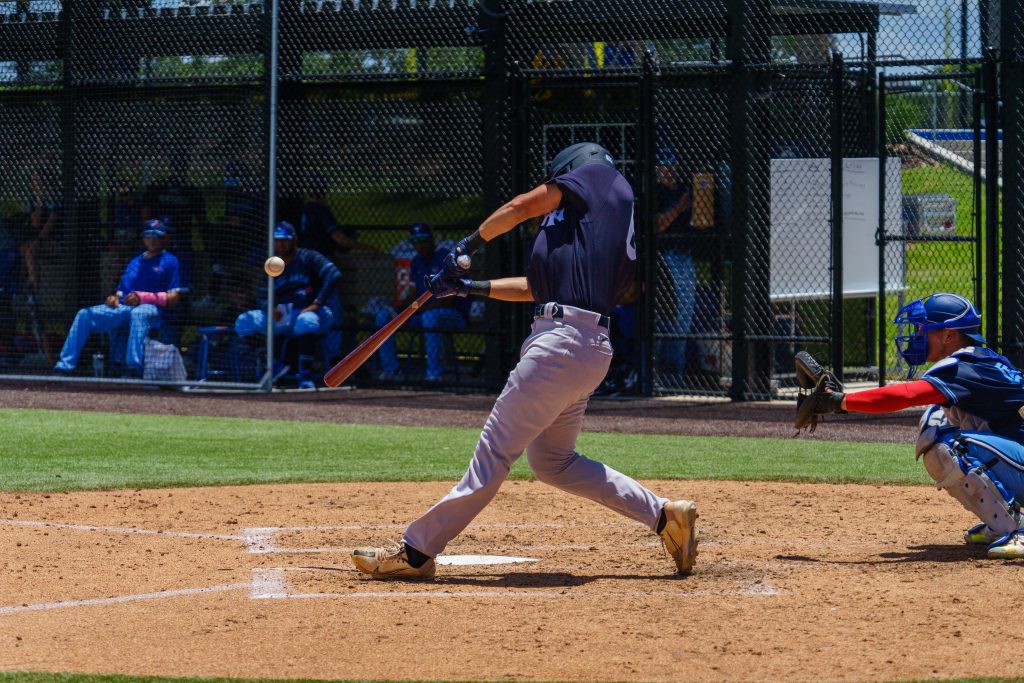 Brewer batted 9th and didn’t see any defensive action or offensive action unfortunately. Brewer didn’t record a hit in this game (he did hit a foul ball though), nor did he have any balls hit to him (or have any runners get to 3rd base because of the efficient pitching).