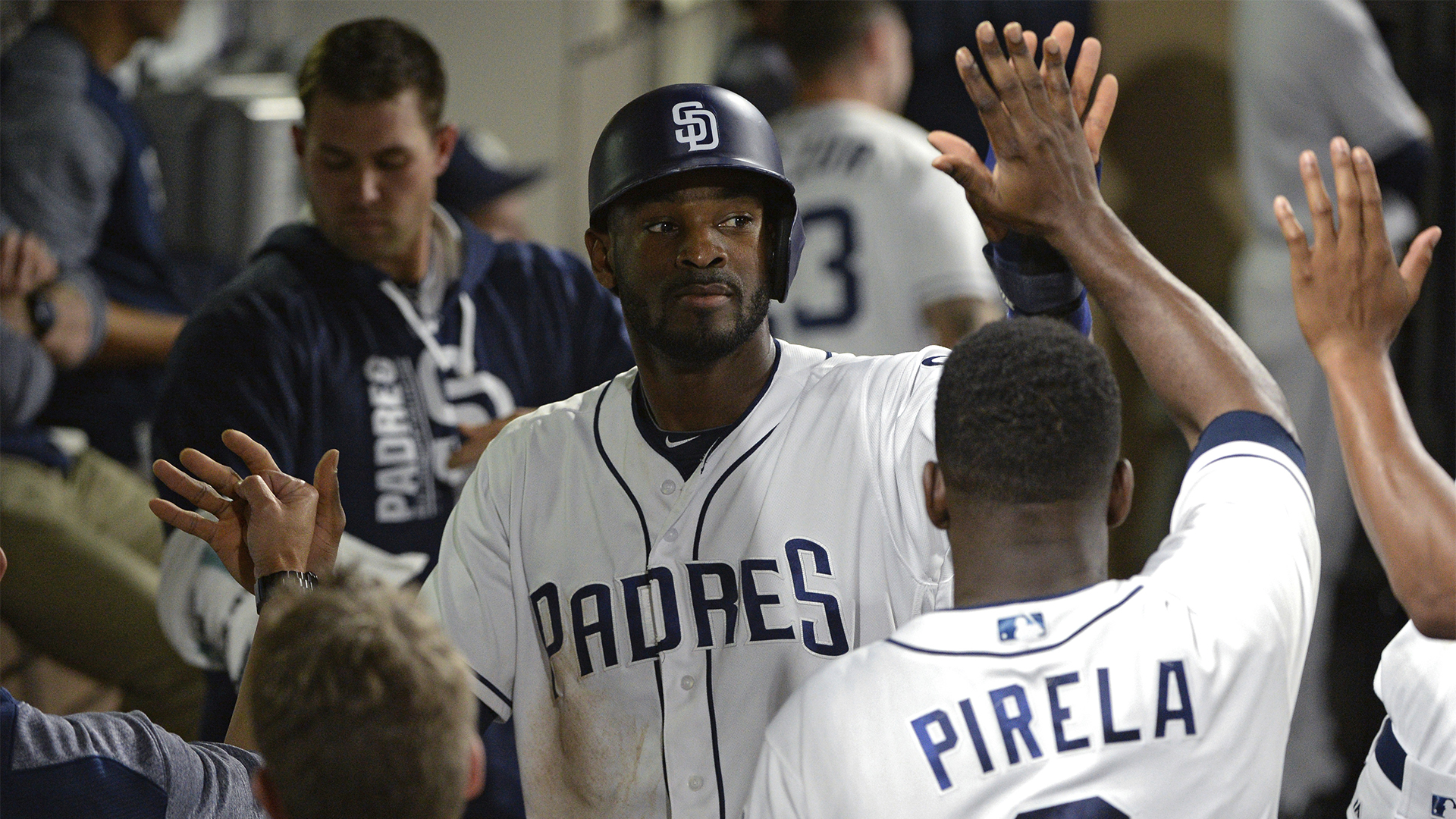 San Diego Padres' Jabari Blash is congratulated in the dugout after scoring on an Austin Hedges single during the sixth inning of a baseball game against the San Francisco Giants on Wednesday, Aug. 30, 2017, in San Diego. (AP Photo/Orlando Ramirez)

According to Joel Sherman and Ken Rosenthal, the New York Yankees have acquired outfielder Jabari Blash from the San Diego Padres in exchange for right-handed pitcher Bryan Mitchell and third baseman Chase Headley.

The trade allows the Yankees to clear another $13 million in salary since the Padres will take on all of Headley’s salary, further allowing them to get under the luxury tax threshold for the 2018 season.   According to Cot’s Baseball Contract’s tracker, the trade gives the Yankees approximately $27 million until they hit the tax threshold.

Blash, 28, was initially an eighth-round draft pick of the Seattle Mariners out of Miami Dade Community College, his brother Jamori is a first baseman in the Nationals organization.  In 685 career minor league games, Jabari hit .260/.378/.513 with 133 doubles, 17 triples, and 140 home runs while driving in 392 runs.

Blash has spent parts of the last two seasons in the major leagues with the Padres after making his MLB debut on April 4, 2016.  In 99 MLB games, he has hit .200/.323/.336 with eight doubles and eight home runs. The outfielder has won accolades all throughout his minor league career, being named the player of the week twice in the Southern League.  He was also a Baseball America Short-Season All-Star in 2011 and a mid-season all-star twice in 2013 and 2015.  Also, he was named a MiLB.com Organizational All-Star in 2013 with Seattle and 2017 with San Diego.

After not being added to the 40-man roster by the Mariners in 2015 he was selected by the Oakland Athletics in the Rule 5 draft and subsequently traded to the Padres.  He was retained by the Padres after the sent cash to the Mariners as compensation.

Blash was named the 11th best prospect in the Mariners organization after the 2015 season, a year that saw him belt 32 home runs in 116 games in Double-A and Triple-A.  He is athletic with good speed as well a strong arm.  He has shown the ability to hit towering home runs thanks to good bat speed.

Unlike Mitchell, Blash can be optioned to Triple-A, which is where he is expected to play most of the season.  However, if the Yankees need a roster spot it is likely he is one of the first players that will be designated for assignment.