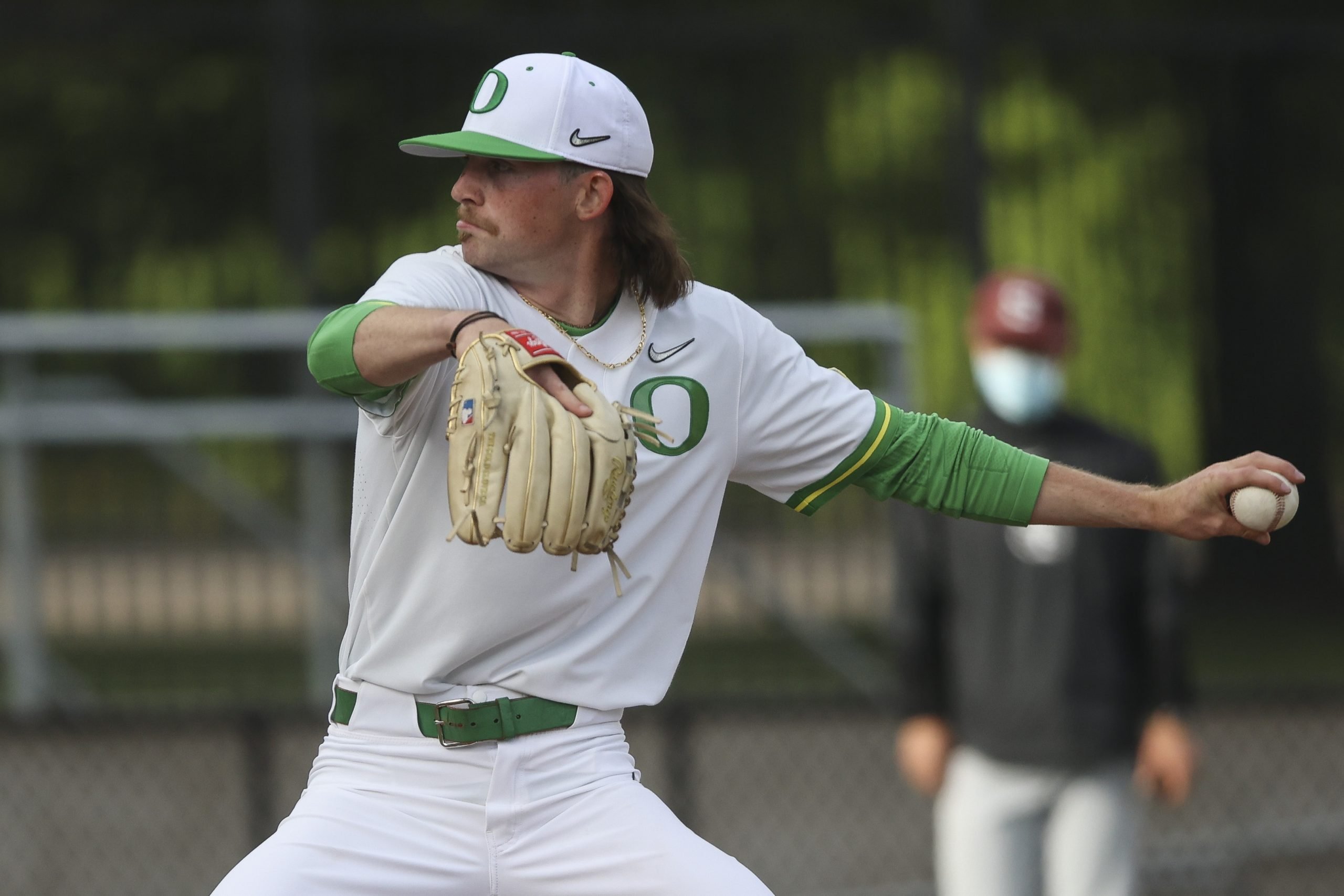 The Yankees drafted Robert Ahlstrom in the seventh round on Tuesday. Photo Courtesy of Goducks.com/Eric Evans

If you have followed the New York Yankees drafts over the last two years, there has been one theme and that is there isn’t an east coast bias when it comes to the Yankees draft room. Out of the 13 picks they have made so far since 2020, five of them have come from Pac-12 schools (Arizona, Arizona State, Stanford, Oregon, USC).

It started in Round 2 on Monday when the Yankees went with Brendan Beck, the right-handed pitcher out of Stanford. The Yankees went with familiarity with this pick since they selected his brother, Tristan, back in 2017, but Tristan (now with the Braves) decided to go to Stanford.

Beck is a pitcher that has four solid pitches in his arsenal. The right-hander had 143 strikeouts to just 26 walks in 108.2 innings and faced some tough competition. In fact, he lost to the Yankees’ 7th Round draft pick, Oregon left-hander Robert Ahlstrom.

Back on May 21, Ahlstrom outdueled Beck as Oregon picked up a 2-1 win in Eugene. Beck went the distance as he allowed two runs on four hits and struck out nine. As for Ahlstrom, he got the win as he allowed one run on three hits, walked two, and struck out 10 over 7.1 innings of work.

While Ahlstrom doesn’t have the fastest velocity with any of his pitches, he showed good command while with the Ducks as he had 16 walks in 14 starts this year. His 66 strikeouts in Pac-12 play eneded up being the second-most in the entire conference and he had a low ERA of 2.50 for the season.

The third Pac-12 arm was USC right-hander Chandler Champlain, who was taken in the 9th Round. He pitched well in his last three starts of the season as he allowed four earned runs, struck out 20 batters, and walked six in 19.2 innings. He did allow 10 home runs in 15 starts and the inconsistency with his delivery is something to watch, courtesy of Vinnie Cervino from Perfect Game:

Chandler Champlain is a project but an upside one for the #Yankees. Physical frame, had prospect status in HS, throws hard but has been incon. with strikes/deliv. #PGDraft #SquadUp

The Yankees didn’t stop there with pitchers. In the third round, they went with Hamilton High School (Arizona) left-hander Brock Selvidge, who is likely to be a player that gets more than the slot money to get him to decommit from LSU. As we noted earlier on Monday, Selvidge was rated as the second best prep player in Arizona and the best pitcher according to Prep Baseball Report:

With the 92nd pick in the 2021 #MLBDraft, the @Yankees select LHP Brock Selvidge (Hamilton). Been one of the top arms in the state over last several years. Congrats Brock. @prepbaseball @Brock5Selvidge @hhsbaseball98 @PBR_DraftHQ pic.twitter.com/WKC5pr1hOW

In Round 6, the Yankees went with Auburn right-hander Richard Fitts. Fitts is an intriguing pick because he had first-round talent, but he battled a toe injury at the start of the season. The right-hander has a fastball that can touch 97 to go with a changeup and slider and it will be interesting to see how the Yankees use him if he chooses to sign and forego his senior season in the SEC.

The other pitcher the Yankees took was Southeastern Louisiana right-hander Will Warren. Warren was one of the best pitchers in the Southland Conference this past season and he threw six shutout innings against Arizona this year (6 IP, 6 H, 4 BB, 4 K’s). He can get the fastball up to 97 mph and is known for his curveball. In his last three starts of the season, he had 31 strikeouts in 21.2 innings.

The Yankees didn’t just get pitching on Day 2. They went after a trio of infielders. They took Louisville 2B Cooper Bowman in Round 4, who is known for his speed and hit tools. In Round 5, they went with more power as they took Oklahoma first baseman Tyler Hardman. As Brendan Kuty of NJ.com tweeted, the Yankees see him as a player that resembles Luke Voit in terms of his power to go with the .397 average he had in 55 games this season with the Sooners:

Finally, in Round 10, the Yankees ended the day by taking Maryland shortstop Benjamin Cowles. Cowles is from upstate New York and he had a .409 on-base percentage this year to go with 18 home runs and out of his 50 hits this year in mainly Big Ten play, 24 of them were for extra-bases. He made seven errors in 48 games with the Terrapins, but never had a game in where he made more than one error.

Day 3 will be interesting to watch because the Yankees have yet to take an outfielder, but they do have a lot of lower level depth at that position. Of course, keep in mind that Andy Pettitte’s son, Jared Pettitte, is still on the board. The left-hander held opponents to a .198 batting average this year in his redshirt junior season at Dallas Baptist.