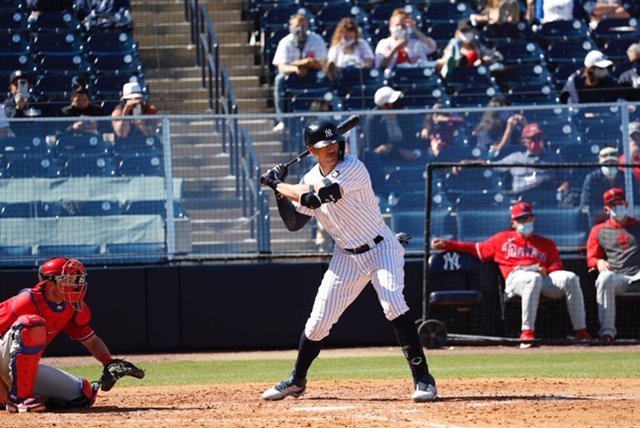 The Yankees bats went quiet under the lights at George M. Steinbrenner Field on Monday and gave their pitching staff no support as the Yankees were shutout 4-0 by the Phillies.

The Yankees bats were quiet on Monday as the only spark was from Giancarlo Stanton. Stanton was 2-for-2 on the night with two singles. He has a .391 average and a 1.109 OPS after Monday night’s game and is showing he’s ready for the regular season.

Other than Stanton’s two singles, the Yankees offense was quiet. This is a trend that Yankees fans are too used to seeing. After nights when the Yankees put up double-digit hits, they tend to go quiet the next night. In order for the Yankees to be successful, they need to be able to come off big nights and continue to produce in the next game. Consistency needs to be key for this Yankees offense, and striking out 12 times in a game like Monday night will be costly for the Yankees.

The Yankees pitching staff didn’t receive much help from the offense on Monday night, but they didn’t have the best performance themselves either. Jameson Taillon (1-1) took Monday’s loss, allowing one run on five hits over the course of 2.2 innings pitched. He did strike out five and managed to find his way out of trouble a couple times to keep his ERA at 1.08 this spring.

Chad Green relieved Taillon in the third, and allowed two hits and a run, striking out one.

The next two pitchers would be Aroldis Chapman and Darrenn O’Day. Chapman allowed one walk and struck out two. He keeps his spring ERA 0.00.

O’Day allowed one hit, a walk, and struck out one.

Wilson Continues to Struggle and Exits with Injury

Justin Wilson followed O’Day and continued to struggle and falter on the mound. He would pitch 17 pitches without recording an out. He allowed two hits, two earned runs, a walk, and a home run to former Yankee DiDi Gregorious before leaving the game with an apparent injury that the Yankees described as shoulder tightness. His ERA after Monday’s performance is 23.14. It is hard to think he will find himself on the Yankees opening day roster next week after his spring struggles continued on Monday.

Cortes and Lyons Close it Out

Together, Yankees pitching gave up 11 hits, but also struck out 14 on Monday night. Pitching, as with offense, needs to show more consistency and their ability to make outs. Though they struck out 14 as a unit, they still also gave up 11 hits that proved to be costly. That number of hits allowed needs to come down for the Yankees to be successful in 2021.

The Yankees will head to Lakeland on Tuesday to take on the Detroit Tigers. Corey Kluber will return to the mound for the Yankees on Tuesday.