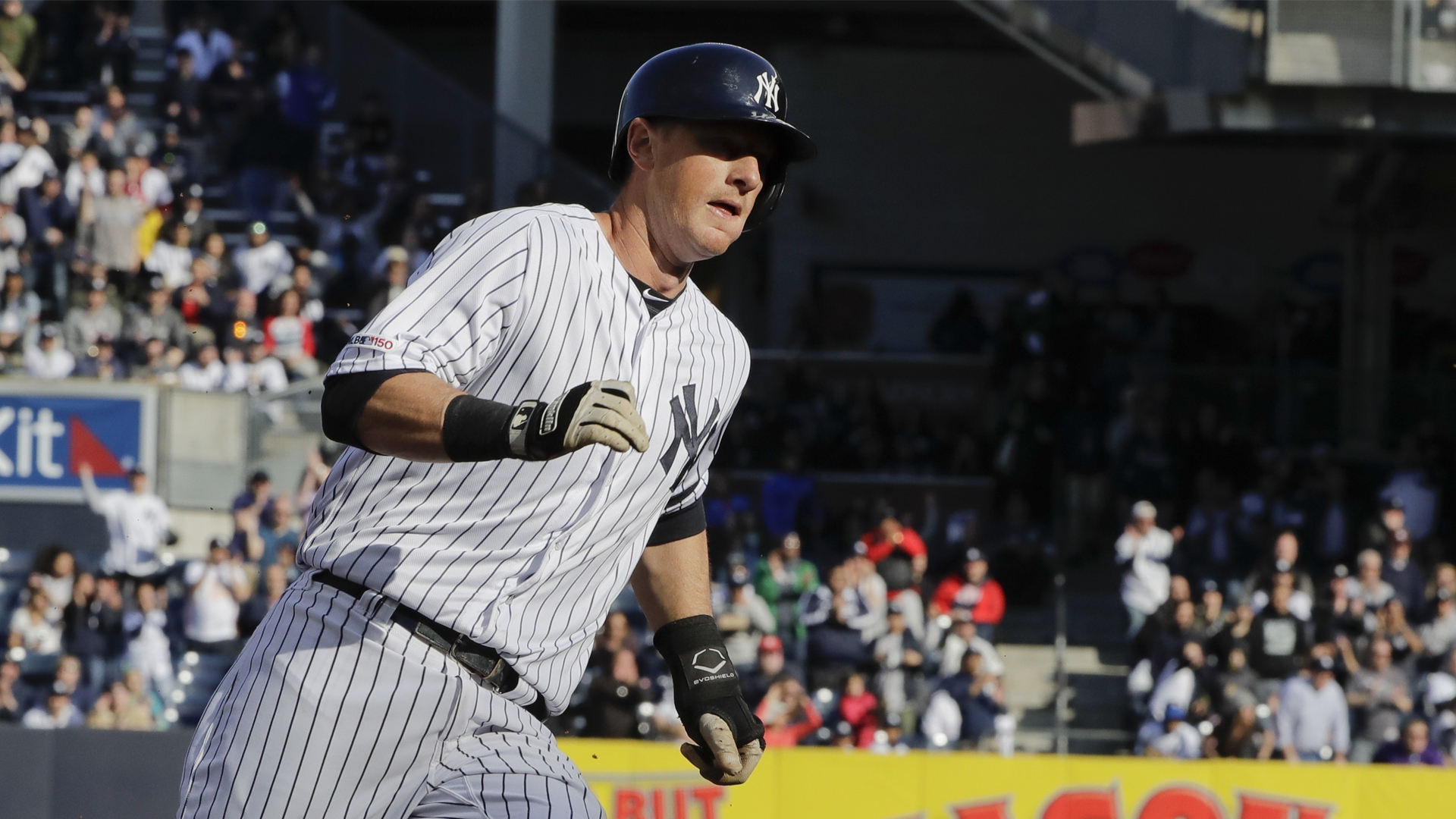 New York Yankees' DJ LeMahieu runs past third base to score on a single by Aaron Judge during the third inning of a baseball game against the Detroit Tigers Wednesday, April 3, 2019, in New York. (AP Photo/Frank Franklin II)

At long last, the New York Yankees have brought back DJ LeMahieu on a six-year, $90 million contract ($15 million AAV) in a deal first reported by Jeff Passan of ESPN:

LeMahieu’s return to New York always felt inevitable. It took a while. But he wanted to be there and Yankees get top free agent target.

In an off-season dominated by their cross-town rivals, the Yankees have made their first meaningful move of the offseason. Perhaps there is more to come as well. This contract gives the Yankees more room to breathe in the near term.

The rumor that had struck fear into Yankees Universe was that the team was not willing to give LeMahieu a five-year, $100 million deal. So instead, the two sides were able to come to terms on a deal that gives the second baseman a long-term contract, but at a lower AAV (average annual value). Perhaps LeMahieu was willing to make the concession knowing that accepting more years and a lower AAV would help make the Yankees more flexible on their path to building a World Series Champion. I definitely think he wants to be here to win. Also, it is possible that LeMahieu was just happy to lock up an extra year at $15 million.

Regardless, if you’ve read any of my articles in the past, you’d know I’ve been mentally preparing for a 2021 Yankees roster without DJ LeMahieu. I would not have minded a world in which the Yankees went a different route. There are, after all, some paths that they could have taken should LeMahieu have not been in Pinstripes: Kolten Wong, Andrelton Simmons, and Marcus Semien.

I don’t think, at the end of the day, that any sort of replacement for LeMahieu would have given the franchise the type of character that DJ brings. I also think that not just the fans, but the Yankees’ players as well, wanted him back. After all, Gleyber Torres has been showing nothing but love to the second baseman on Twitter while he’s been working out a contract. Not only is LeMahieu a great baseball player, but he has also singlehandedly woven himself into the fabric of the Yankees’ organization.

Most of that comes from how unexpected his rise to being a fan favorite has been and perhaps that’s why he’s the fan favorite. With the Yankees, a team that shells out big contract like candy, being under the radar and playing like an MVP wins over the fanbase.

We must not forget that LeMahieu was not even present on the Opening Day Lineup in 2019. He had just been inked to a two-year, $24 million deal as someone who had the chance to make a difference. Instead, he put together two straight MVP caliber seasons and nearly singlehandedly saved the Yankees 2019 season with a two-run game tying home run in the top of the 9th of Game 6 of the ALCS. He had all but cemented himself as a beloved Yankee in that moment.

It’s not just his play that makes him so lovable, but his temperament. If you ask anyone that was around for the Yankees’ run in the late 90s, they’ll tell you that LeMahieu reminds them of those teams. Someone who speaks softly, but quite literally carries a big stick. He won’t get tangled up with the media, he’ll never call out any of his teammates publicly, and he’s a practical guarantee to always say the right thing. Most importantly, the only thing he seems to want is to win. When it comes to New York, that is invaluable.

When you think about it, this deal is a great one for the Yankees. LeMahieu remains on a tradable contract should things go south and it gives the Yankees more flexibility to continue to add pieces this offseason. One main takeaway from this is also that Gleyber Torres becomes the Yankees’ every day shortstop. As we learned in 2020, that might not be the most reliable option, but it’s one the Yankees have to live with.

One must imagine that Hal Steinbrenner is a bit perturbed by everything that Steve Cohen has come in to do for the Mets, so don’t be too surprised if the Yankees add another big name or at least some more solid pieces.