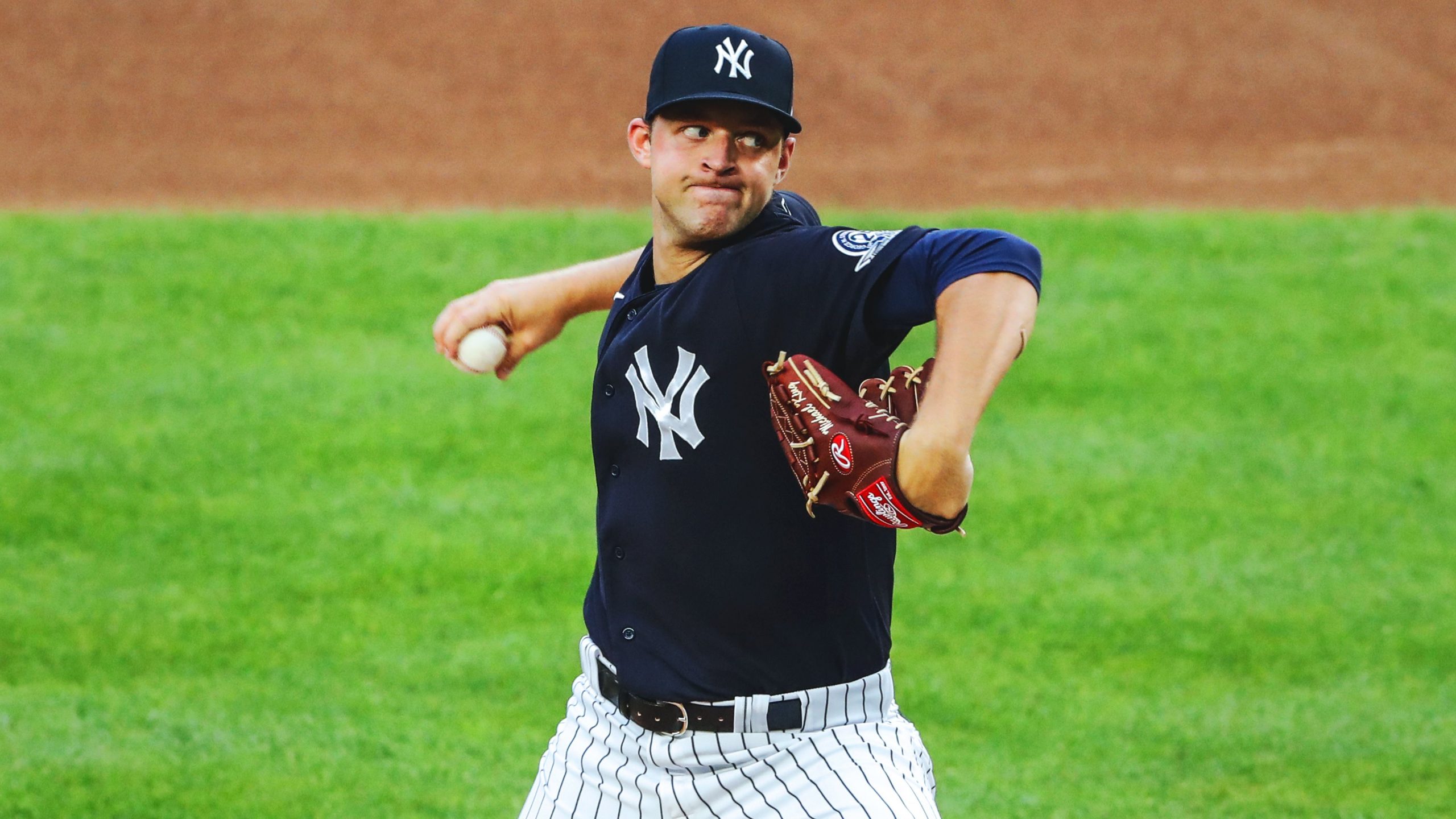 The New York Yankees defeated the New York Mets in the first exhibition game of Summer Camp 2020 by a scores of 9-3. Chad Greene was the winning pitcher, and Rick Porcello took the loss.

Tonight’s starter for the Yankees, Michael King was absolutely dominant. King gave up just one run and three hits, and struck out three over the course of four innings pitched at Citi Field.

“It was fun to see other guys in the box,” stated King. “It was my first time pitching in Citi Field, I had a lot of fun.” King stated he felt pretty good tonight. He was happy with his fastball command and stated that he threw a couple good changeups as well. King stated that his slider is his pitch that could use improvement, which is the pitch that got him into trouble in the fourth inning, hanging a slider to JD Davis that Davis would hit for an RBI double. King stated he executed a couple good sliders early, but just couldn’t get the pitch glove-side down tonight. King has become more confident with his slider, stated that he got his confidence back during the quarantine by having extra time to work on it. He stated that even with rough pitches and loss of command, he’s able to be able to gain more confidence and change his mind set to get the pitch command back. By telling himself, “don’t hang this,” or “keep it glove-side down,” King is able to refocus himself with his slider. “I have a lot more confidence in it, that even when I’m struggling, I’m confident I’m going to get it back,” stated King.

When asked about what stood out to him about the new environment of baseball in 2020, King stated that initially the cardboard cutouts of fans were a little weird. “When I first walked out to the mound and saw them it was weird, but once you start facing hitters, you lock in on just the zone and it’s just you and the catcher working,” stated King. The Mets were also feeding crowd noise into the stadium tonight. King said it didn’t affect him at all and that the sound producers did a great job. He stated if actual fans were out there, that he might have gotten a little more pumped up, but facing another team was all the adrenaline he needed.

Summing up his overall Summer Camp, King stated that it was different, but that he is happy with how he has performed and that “I guess we’ll see what happens from here on out,” stated King. “It’s great to have baseball back, so that was positive,” King said. 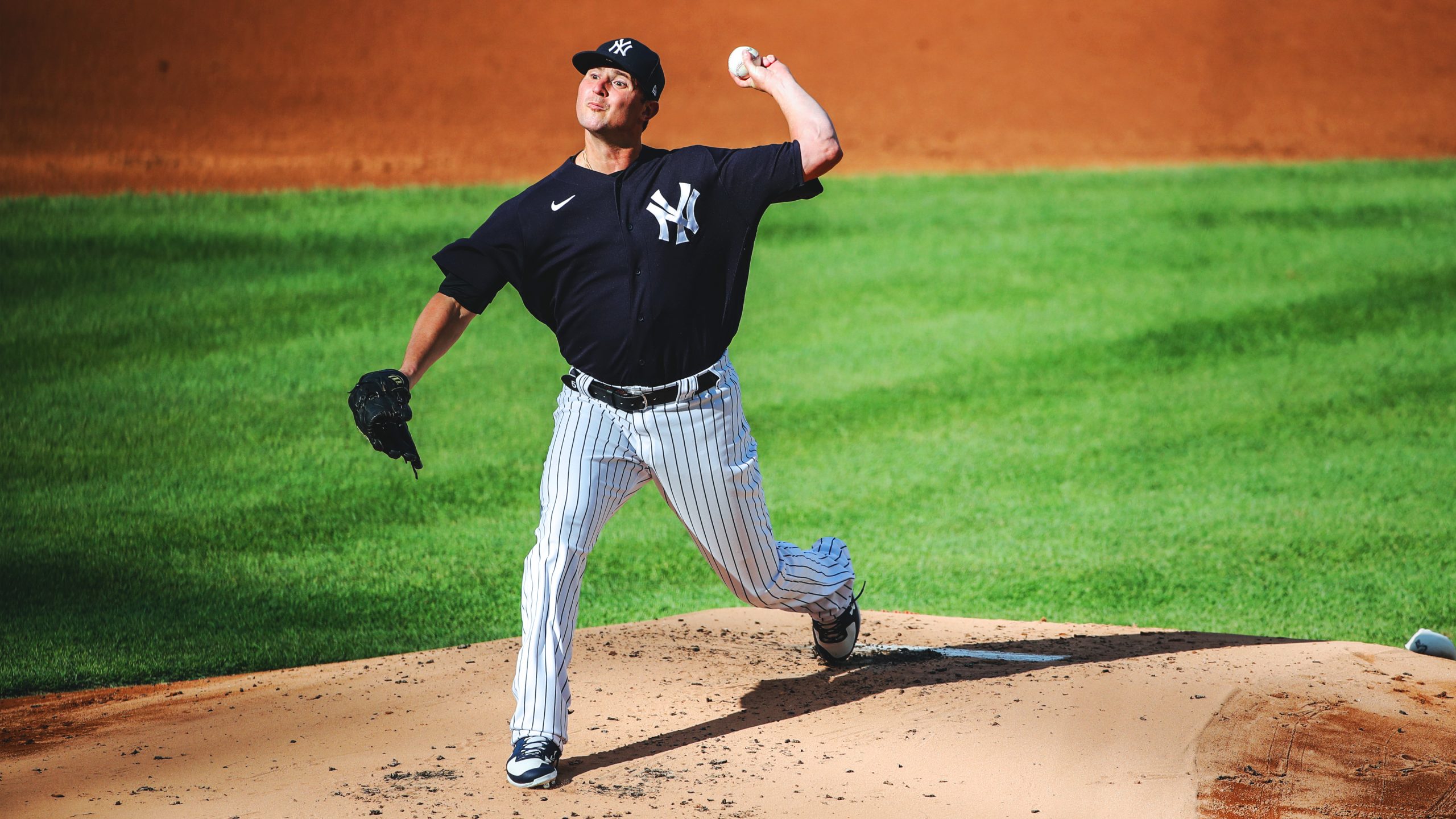 Zach Britton replaced in the fifth inning. Britton gave up 1 run on 3 hits in one inning pitched tonight.

Britton stated that the overall game day experience was a little different, but it was a good practice to get used to it ahead of opening season. He mentioned that it was a little noticeable not having fans in the stadium, but that he didn’t think about it too much, and that he had to get used to bringing his own rosin bag out. Britton also stated that while you can’t replace or duplicate a real crowd he thought the cutouts were a good idea, and that it broke up just having empty seats to stare at behind the batter.

When asked what it was like facing another team, Britton stated that it feels good to face a different uniform and not your own guys. “It gets the juices going a little more,” stated Britton.

Aaron Boone has initiated a strategic extra infielder when Britton pitches. The Yankees practiced that tonight. Britton stated it makes a lot of sense for him and that they got good feedback off of it with line drives to left and right tonight and that two of the balls were right at defenders.

When asked if he feels ready and where he wants to be, Britton stated he feels good, but wants to get more consistent in some things. But he is regular season-ready. His biggest takeaways from his outing tonight were facing another team and getting some of the added adrenaline out of the way ahead of heading into the regular season as he felt he overthrew a bit tonight.

Aaron Boone met with the media following tonight’s game and he stated that he felt like everything ran pretty well tonight. Boone stated it was really easy for the Yankees to get through their game day routine and get their work in. “It was a lot of fun to compete against someone else, it felt like that in the dugout, it was competitive,” stated Boone, who also stated that the competitive dugout atmosphere was good to see, especially in an exhibition game where you were trying to build some sort of normalcy in different times. Boone stated it was still not totally normal, but that with trying to get guys in the game, being focused on the game brought some sort of normalcy.

Boone spoke on Michael King’s performance, stating that he looked really good and that it was good for King to go out there and set a really good for the team early on. “He was on the attack, using all his pitches, and was really in control of the game,” stated Boone. Blake and Boone had a goal of getting King through four innings tonight, and while he got into a jam in the fourth, he was able to work his way out of it, giving up just one run, and finished really strong. Boone stating he’s really pleased with where King is at right now. Boone also stated that tonight was another step up in competition for King with facing another team in a visiting ballpark and that with only having three exhibition games, it felt like there was something more on the line. Boone stated it was nice to see a step-up in competition and bring out the best in King.

When asked about Clint Frazier’s home run and performance tonight, Boone stated he’s been playing really well the last few days, and that the quality of his at bats have been up as well. He’s pleased with the way Frazier is performing.

Boone also spoke on Giancarlo Stanton’s performance, commending his ability to be disciplined in his process and his ability to really focus and lock in on what he’s trying to do against a particular pitcher and the approach he wants to have and plan he has at the plate. Boone stating that Stanton puts in very specific work and had some really good at bats tonight.

Boone also took time to speak on guys like Mike Tauchman, Thairo Estrada and Estevan Florial, stating that he has his hands full, along with the organization, in making roster decisions this next week. Boone stating that Estrada has been the MVP of summer camp so far and Tauchman the last four or five days getting off really good swings, and really controlling the strike zone. Boone stated it’s really good to see all the guys really focusing in as opening day approaches.

The Yankees have another exhibition game against the Mets tomorrow night, back home at Yankee Stadium. First pitch is at 7:00 PM and it will be Jordan Montgomery taking the mound for the Yankees against Corey Oswalt for the Mets.