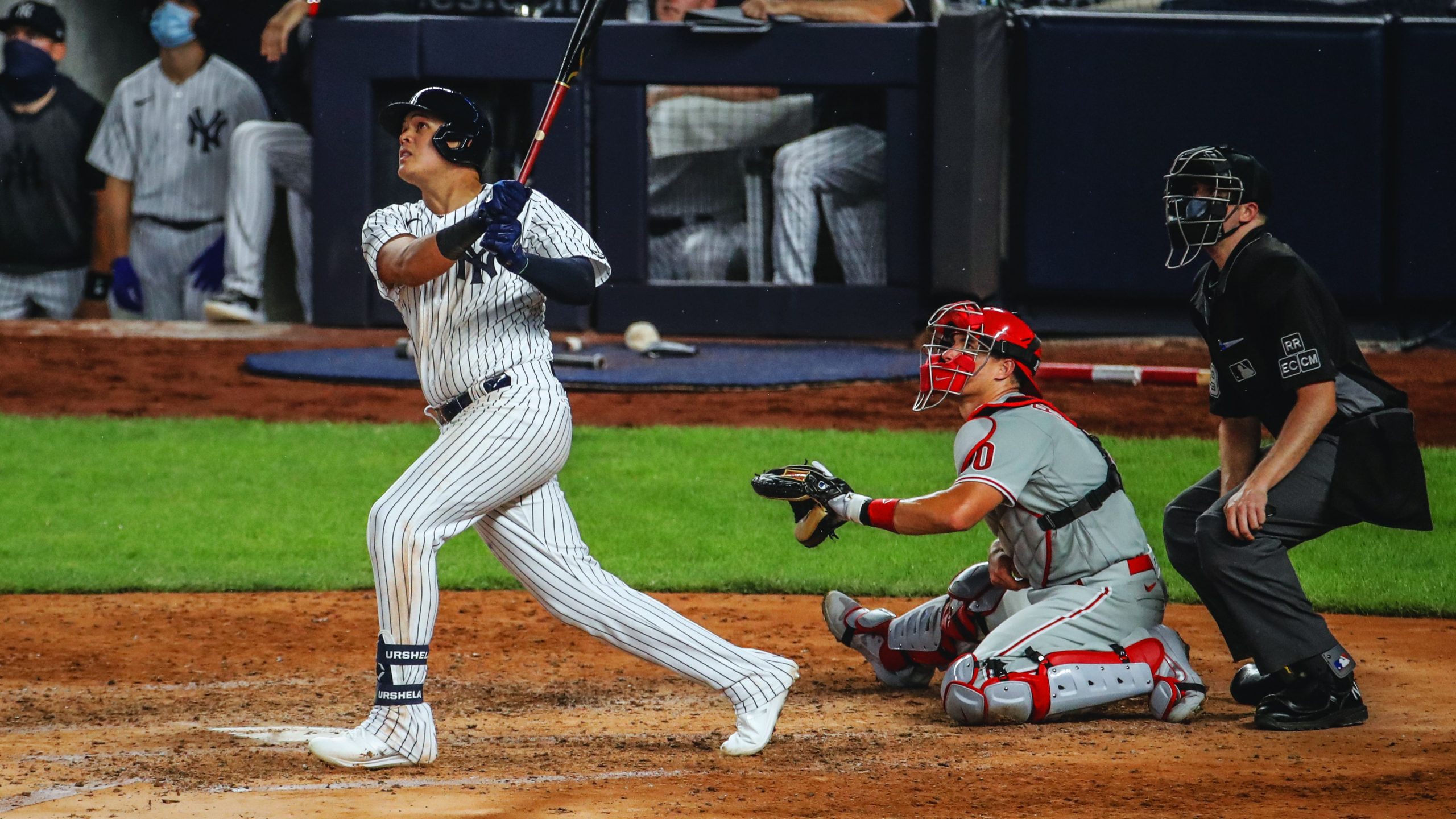 The New York Yankees defeated former Manager, Joe Girardi, former teammate, DiDiGregorious and the Philadelphia Phillies 6-3 tonight in their Yankee-Stadium reunion to open up their series with a win in New York. With tonight’s win, the Yankees have won seven straight games and improve to a Major League-best 8-1 record. This is just the third time in franchise history that the Yankees have started 8-1. Gerrit Cole, making his Yankee Stadium debut this evening, got the win for the Yankees. He improves to 3-0 on the season. Jake Arietta (0-1) got the loss for the Phillies, and Zach Britton recorded his third save of the season. With tonight’s loss, the Phillies fall to 1-3, having played only four games total this season so far. But the red-hot Yankees improve to 8-1 and stand a top the major leagues with the best league record.

Aaron Boone spoke with the media following tonight’s game, stating that he’s excited with the Yankees’ start and the record and the fact that they’re playing baseball. However, he stated that even with the shortened season, the Yankees still have a long way to go and need to keep grinding. Boone speaking about tomorrow’s off-day, saying it comes ahead of a tough stretch of road games and that the Yankees need just keep playing well and racking up the wins.

Brett Gardner stated that it starts with pitching. He mentioned Gerrit Cole’s great outing tonight, stating that he was attacking the strike zone and that LaMahieu getting the team on the board and Urshela coming up big were two big plays tonight for the team.

Brett Gardner described this group as one that it’s a lot of fun to be a part of and that the guys have been doing a great job. 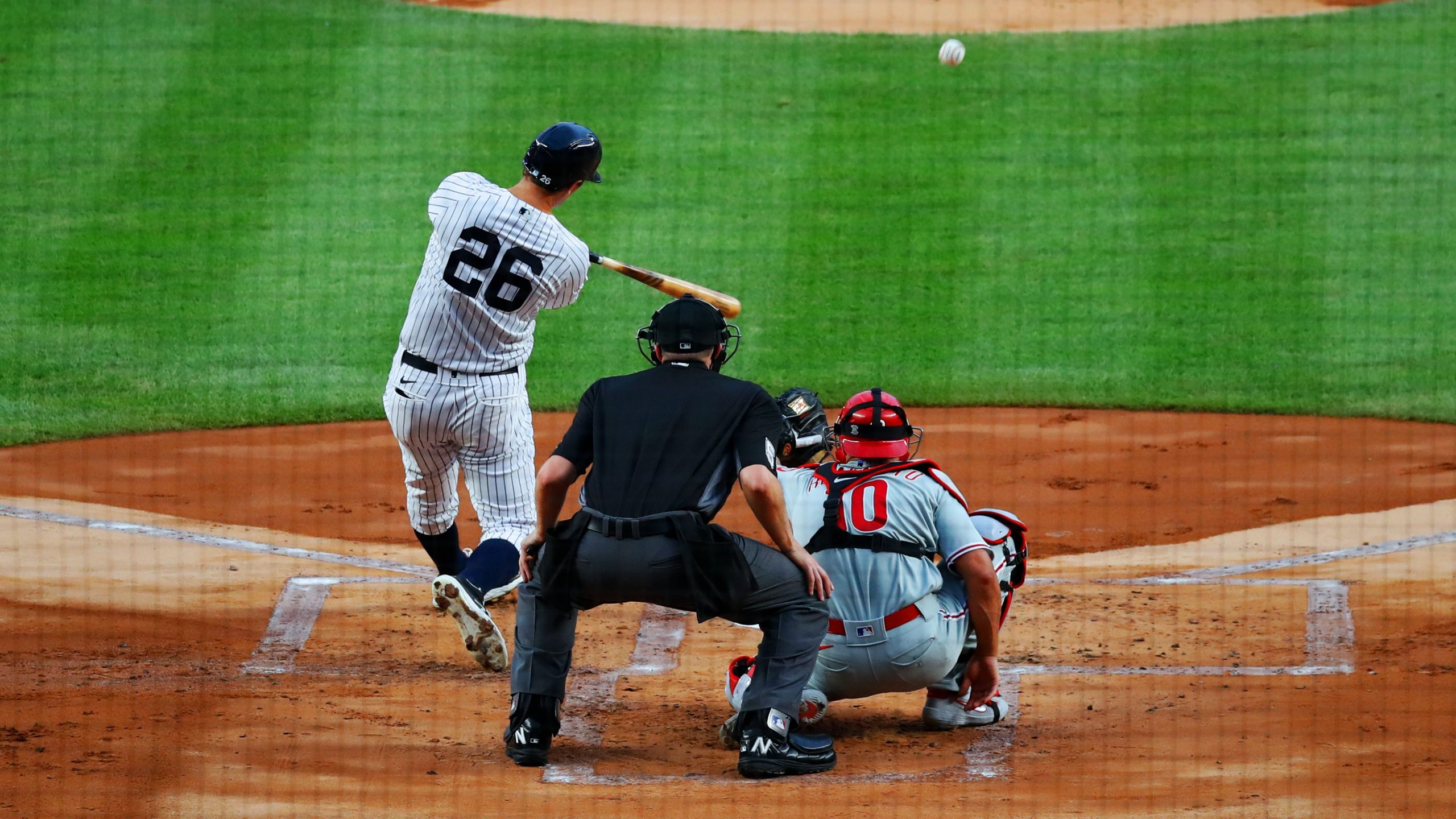 DJ LaMahieu did Machine-like things in the first inning to get the Yankees on board early in the first with a home run to start the inning.

Jay Bruce got the Phillies on the board and tied up the game in the top of the third with a home run to right off of Cole. The score would go to 1-1 in the third.

In the bottom of the third, Brett Gardner smashed a home run to left to regain the lead for the Yankees and take the score to 2-1 Yankees. Gardner was just 1-for-16 coming into tonight’s game, making this hit a big hit for Gardner. Aaron Boone stated since it’s rare for Gardner to go to opposite field, the guys had a lot of fun with him and that even Boone himself was rather surprised by the hit.

Brett Gardner also spoke with the media following tonight’s game, stating that anytime he hits a home run, that it’s usually unexpected, but especially to that side of the field. Gardner stating that he felt good to put a good swing on that ball and that the guys gave him a hard time coming back from it. Gardner stating that today was a good, fun game all around. He stated that anytime he can stay on a pitch like that is key for him and that recently he’s been getting in good hitters counts and getting good swings on the ball, regardless of his recent results. Gardner stated that the Yankees have a special group and a special team and that whatever gets thrown their way, they’l deal with it.

Aaron Judge followed up Gardner with a double down the left field line. He was followed by Aaron Hicks, who doubled to score Judge. The Yankees would take a 3-1 lead over the Phillies.

That scores would remain until the bottom of the sixth, when Gio Urshela launched a massive 3-run home run to extend the Yankees’ lead to 6-1. Urshela also had multiple great plays in the field this evening.

Gio Urshela met with the media following tonight’s game, stating that he’s proud of himself for the hard work he’s been doing to get to this moment and that his confidence is key for him. He stated that he’s thankful to be a Yankee all the time and that this moment for him, when he’s continuing to show success, has been a long time coming and that he’s worked hard for it and is proud of himself and his performance tonight.

The tarp was put on the field and we headed into a rain delay ahead of the top of the 7th inning. It was a one hour and ten-minute rain delay as the rain bands from Hurricane Isaias began to come down on the field. Isaias is expected to bring heavy rain into the New York area tomorrow, postponing tomorrow’s game against the Phillies. More on this postponement and make-up below.

Brooks Kriske replaced Gerrit Cole on the mound in the 7th inning. 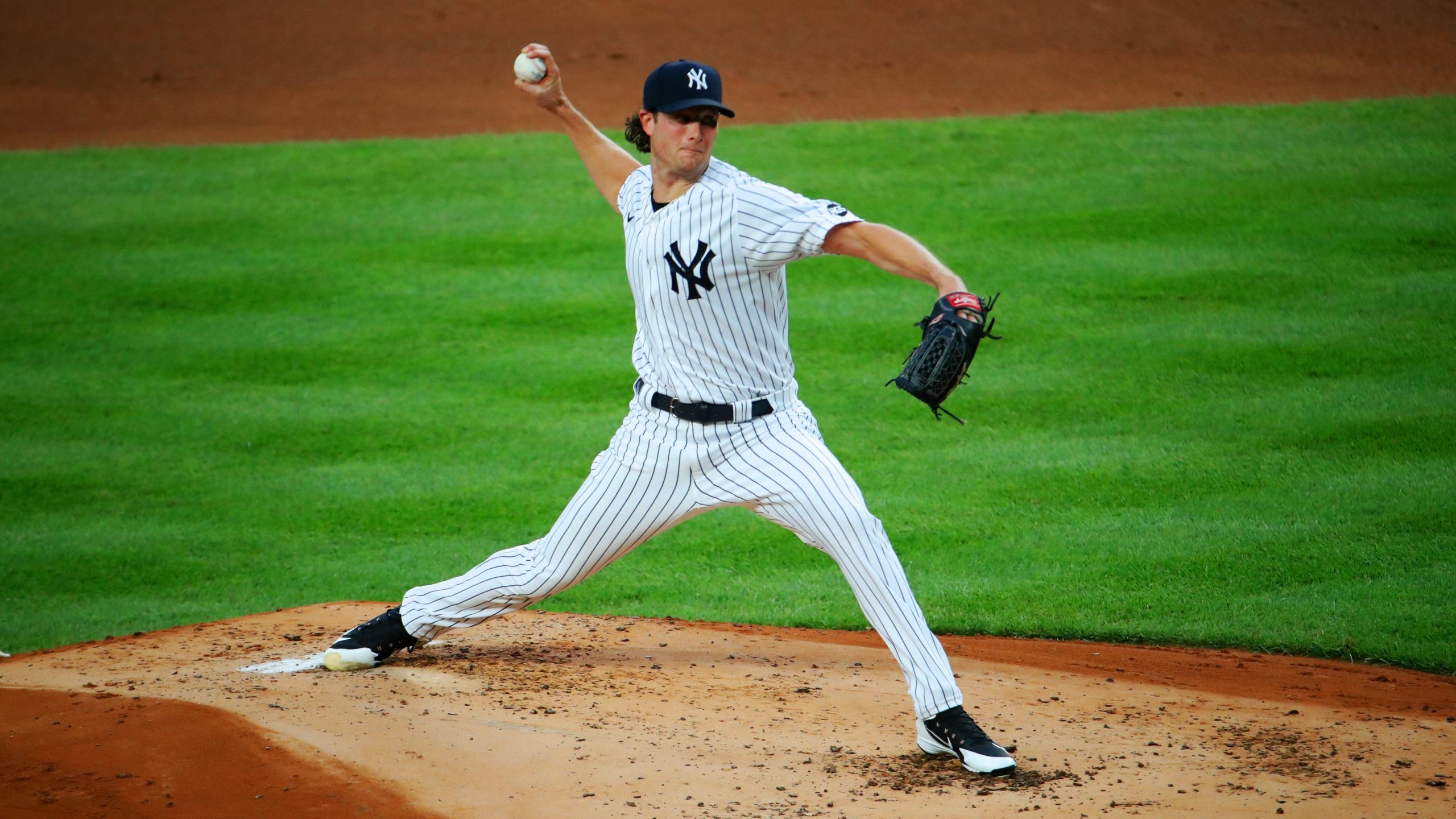 Aaron Boone spoke on Cole’s outing, stating that it was another really good outing for Cole, even though the Phillies were hunting his fastball. He stated that Bruce put together a really good at-bat on Cole, coming back from being down 0-2 and that the Phillies were aggressive with his fastball, which Boone thought was really good tonight. Boone stated that tonight was another really strong outing for Cole, who many say is still not quite at his full potential yet, stating that he has the capability to shut teams down and hold teams to shutouts. Right now, Boone stated, Cole is showing how good of a pitcher he is and that the coaching staff is excited about where he’s at. Boone stating his curveball played well tonight and he’s in an overall great spot.

Gerrit Cole, who made his Yankee Stadium debut tonight, spoke with the media following tonight’s game, stating that there was extra excitement stepping onto the mound tonight and that he imagined getting a win and that he accomplished that. He spoke on the mound being top notch and the team playing a crisp, clean ballgame. At the start of the game, Cole stated that he was thinking about the things he could control and savoring those moments, including the fact of pitching in Yankee Stadium, warming up in that bullpen, making the walk from the bullpen to the field, and savoring those moments. He stated that his family watched the game from back home.

Cole spoke on his curveball, saying that he was able to command it well tonight, used it for some strikeouts early and that it was another opportunity to get ahead with it.

He also stated that his fastball command felt good tonight and that he’d like to be getting ahead in counts more with it, but that he’s cut down some of the spray on his misses and was able to execute pitches and challenge guys tonight. However, he did state that he gives a lot of credit to the Phillies for grinding tonight and for being aggressive and playing with an edge. Cole stating that pitching with a lead gave him an advantage, but that there’s still room to improve across the board. He stated however, that whatever a pitcher has that day is what they have and you do as much work between outings to improve and tighten up performance.

When talking about the evolution of work he’s done with Gary Sanchez, he stated that it’s going great with Sanchez and that they split the duties beforehand as far as workload. Cole stated that Sanchez always makes an effort to find him during games between innings to communicate about pitches and that he picks up plays behind the plate, and picks up tips here and there as well. Cole stating it’s easy to rally around a guy who takes pride in his defense.

Cole also gave a ton of credit to the Yankees’ offense for setting the tone early, from DJ LaMahieu kicking things off and setting the tone in the first inning, which allowed him to throw challenge pitches and play the odds. Cole stating the offense had a great night tonight.

The Phillies got a run back in the 8th on a Jean Segura RBI single that scored JT Realmuto. The Yankees lead was cut to 6-3.

Britton would come in to close it out for the Yankees, recording his fourth save of the season as the Yankees would go on to win this one 6-3 in New York.

Aaron Boone speaking on the bullpen stating that the Yankees got really big outs tonight from Green to stop the Phillies when they were threatening in the seventh, stating that his fastball is definitely there and that his curveball has also become a factor for him. Boone also stated that Zach Britton looked really good tonight, and that his slider was playing well. Boone stating that the setup of Green to Britton are huge for the Yankees at the back-end of the rotation.

Tomorrow’s game against the Phillies has already been postponed due to the expected inclement weather from Hurricane Isiais. The game will be made-up as part of a doubleheader on Wednesday in Philadelphia. The Yankees will play as the home team during one of those games.