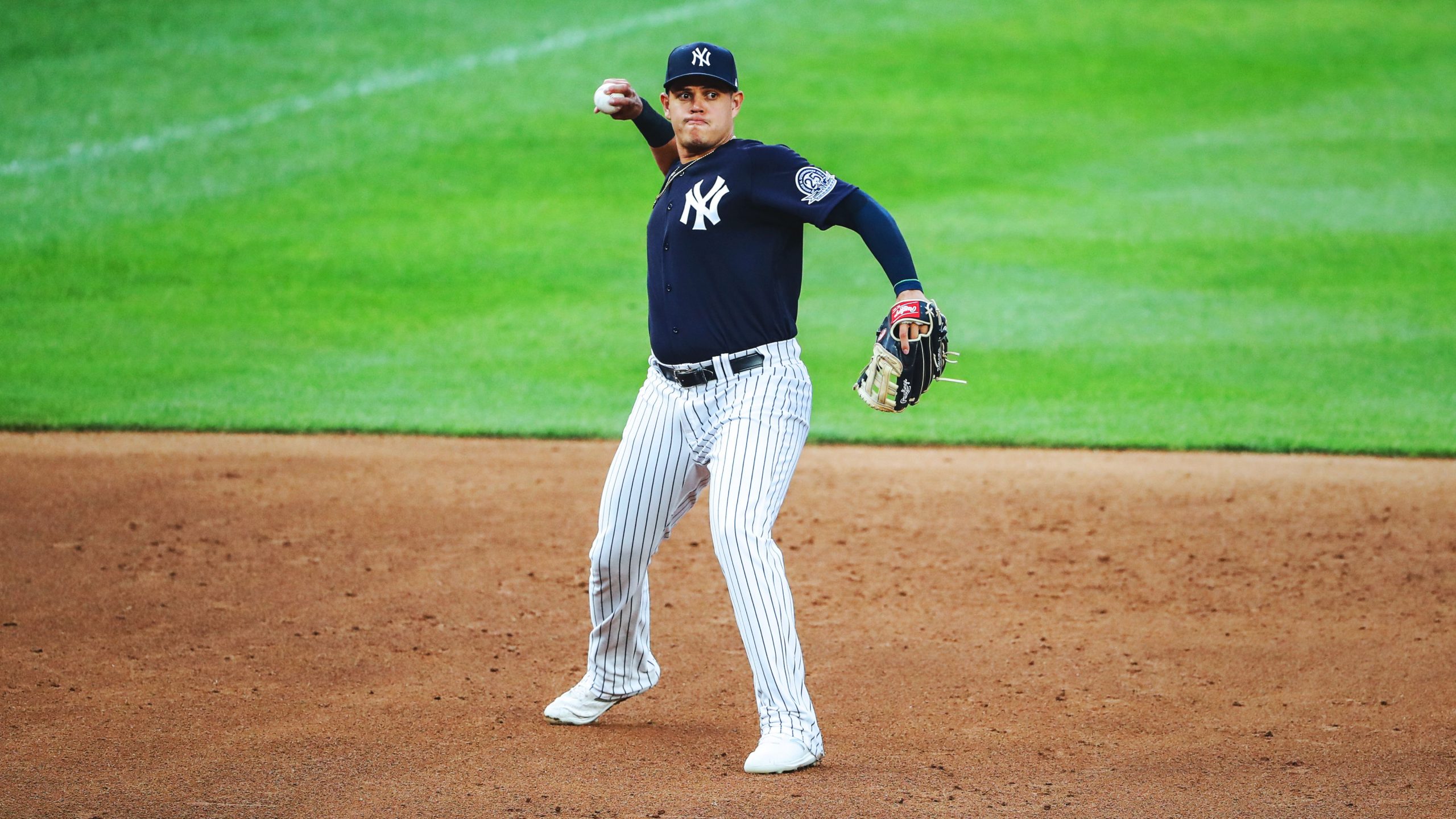 The New York Yankees collected their 3rd series win tonight after defeating the Boston Red Sox 5-2 in New York. The Yankees scored five runs on eight hits and had one error, while the Red Sox scored two runs on six hits and no errors.

Aaron Boone saying that sometimes it takes a lot of traffic on the base-pads and that after Urshela’s second-inning home run, the Red Sox did a good job of holding the Yankees down. 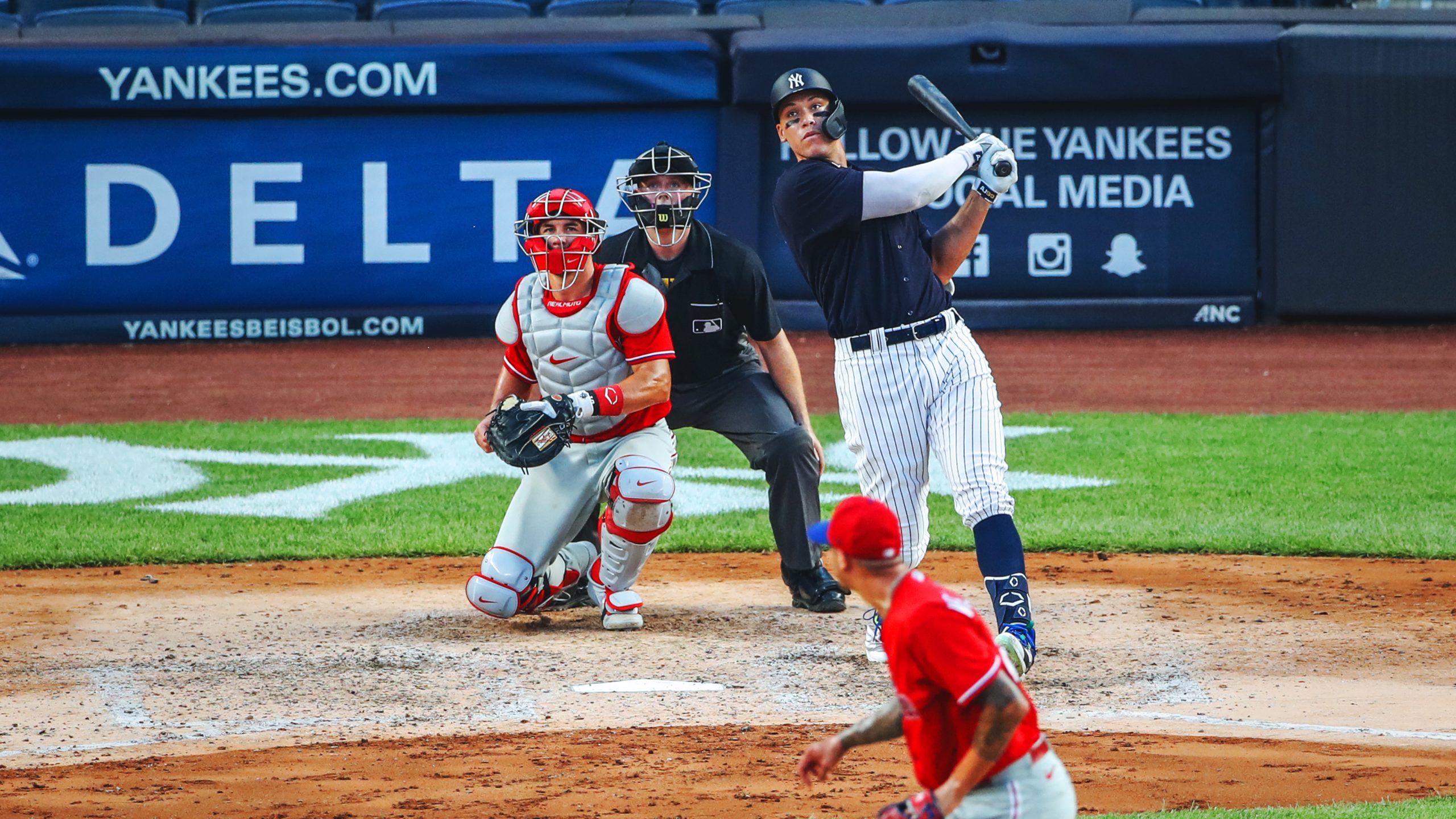 Aaron Judge stayed red hot for the Yankees sending one deep in the 1st inning to put the Yankees on top quick 1-0.

Aaron Boone reiterating that Aaron Judge is one of the great players in the game and that he did a great job of taking advantage of the hanging pitch and set a really nice tone for the Yankees in the first innings. 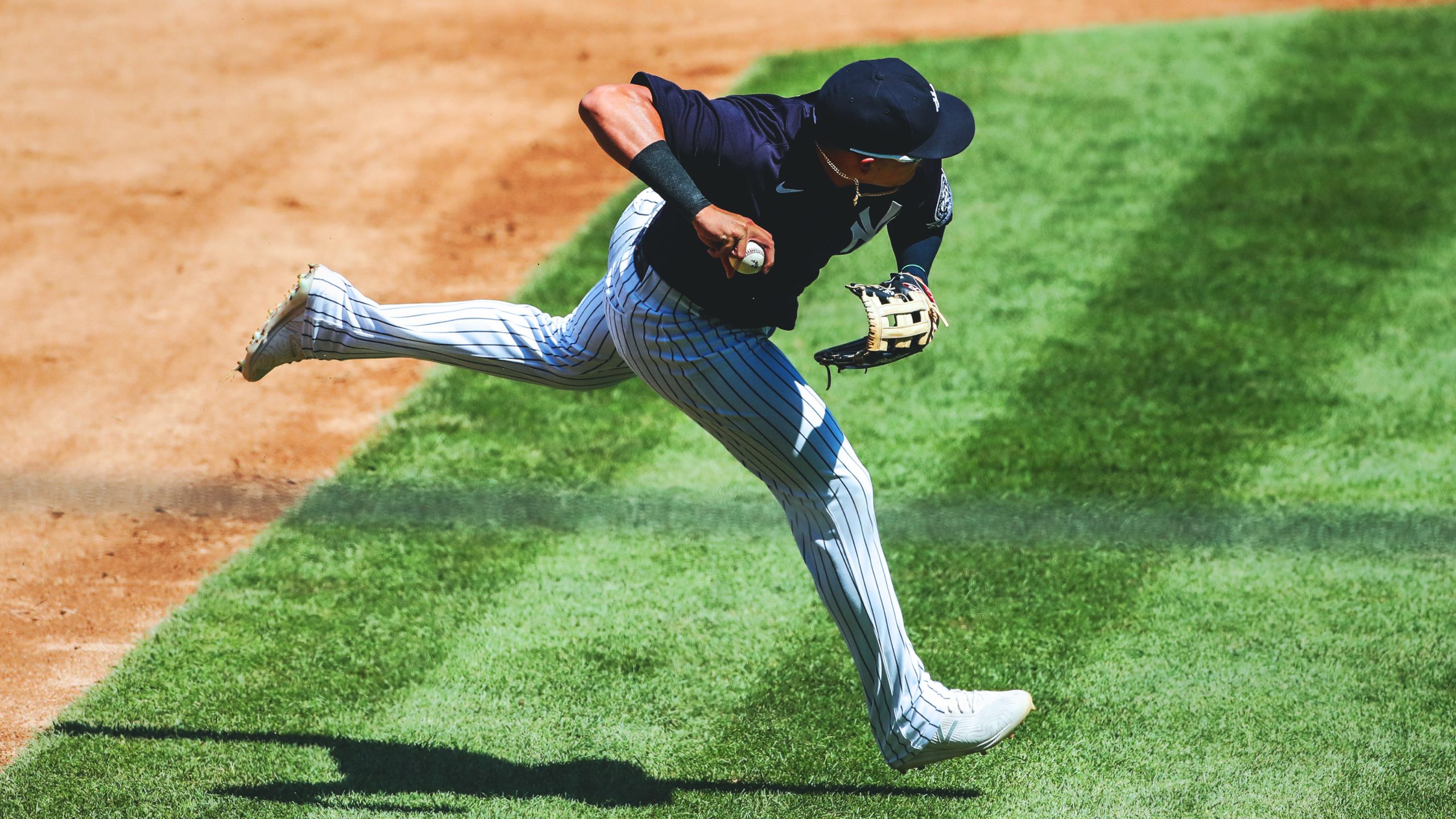 In the bottom of the second inning, Gio Urshela crushed his first grand slam of his career to center field. Luke Voit, Mike Tauchman, and Gary Sanchez all scored. Urshela’s grand slam was the Yankees’ second grand slam this week, with Luke Voit hitting one on July 30th.

Aaron Boone stating that Gio Urshela is one of the good players in the game and that since the beginning of last year, his bat has begun to come alive. Boone stated that Urshela’s year started off a bit slower, but he’s had a lot of quality at-bats, with most of his hits being tough outs. Boone stating that Urshela has continued to have great at-bats and hit the big grand slam tonight.

Urshela stated that it felt really good to hit that grand slam and that he was happy to get those four runs for the team. He stated he missed the fans making a lot of noise, but that he’s always happy to him a home run when he’s playing and the goal is to win every game.

The Red Sox got two runs back in the third on a Xander Bogaerts double that scored Benintendi and Pillar. Those would be the only runs the Red Sox would score as the Yankees would hold the Red Sox to just those two runs. 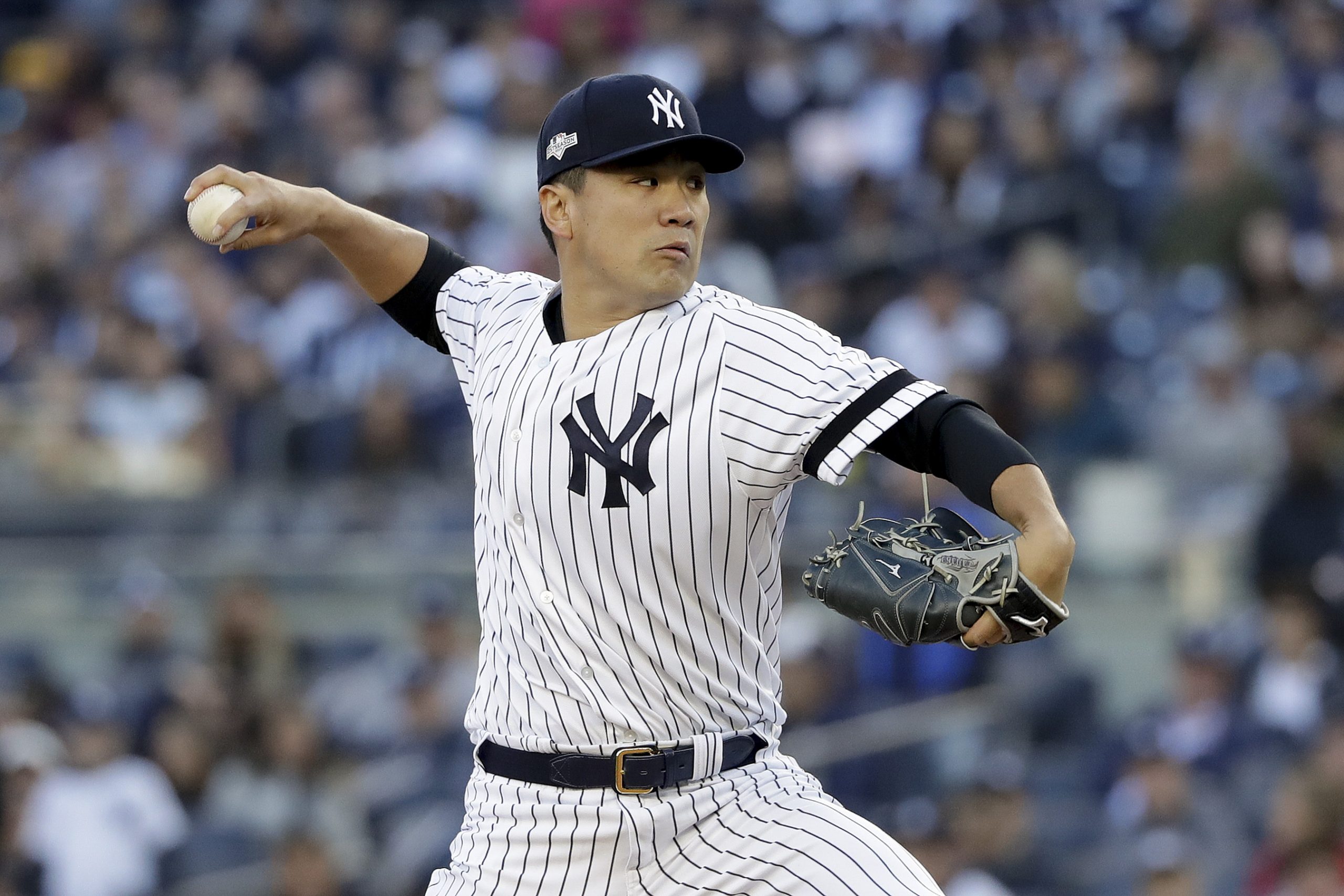 The Yankees used four pitchers tonight. Masahiro Tanaka got his first start of the 2020 season and his first one since being hit by a line drive at the start of Summer Camp. Tanaka went 2.2 innings, giving up four hits, two runs, one earned run, and one walk. He struck out three.

Aaron Boone stated that he thought Tanaka was really good tonight, and that the power was there with the fastball. Boone stating that in his first bullpen back, the velocity was there and that it’s been there through his comeback. Boone also stated that Tanaka mixed his pitches well and that tonight was another strong important step for him to get back out on the mound.

When asked about adding him to the rotation, Boone stated that you’re getting a frontline starting pitcher and adding him back to the mix. It’s a chance to build him up over the next couple outings, but that he’s another piece to the roster to help round out the rotation and build the team. Boone also stating that Tanaka can get the Yankees deep into games, stating that anytime you get a big-league starter back in the rotation, those guys, such as Tanaka, are difference makers.

Masahiro Tanaka spoke with the media following his outing tonight. He stated that he was really excited to be out there tonight and that it felt great to be back on the mound again. “Right now, after my outing, I’m feeling good, so all in all I think everything went well,” said Tanaka, who though he was excited to be out there tonight, was not happy with his command. Tanaka stated that he hasn’t been in a competitive game since Spring Training and that even from his bullpen session, he felt rusty and really didn’t have the command he wanted tonight.

Though his command wasn’t there, Tanaka did state that his velocity was up, saying that the excitement and adrenaline of getting back into game action naturally helped bring up his velocity.

Tanaka spoke on pitching without fans in the stadium, stating that it’s obviously not a normal situation and that it did feel a little bit weird. Tanaka stating that you come to realize how much the fans mean to the game of baseball. Tanaka jokingly stating that if the energy of the fans were in the stadium tonight, that his fastball may have been two to three miles per hour more tonight.

Gio Urshela also stated that he was happy for Tanaka to be back with the team and that he always enjoys seeing him pitch and was trying to get the win for him.

Mike Tauchman also spoke on Tanaka’s outing, stating that he’s a staple in the Yankees’ rotation and that his preparation, effort, and consistency when he takes the ball is what the Yankees expect. They expect him to go deep in games and that he pitched great and looked sharp tonight.

Luis Avilan replaced Tanaka in the third inning. He would go 1.1 innings and struck out two. 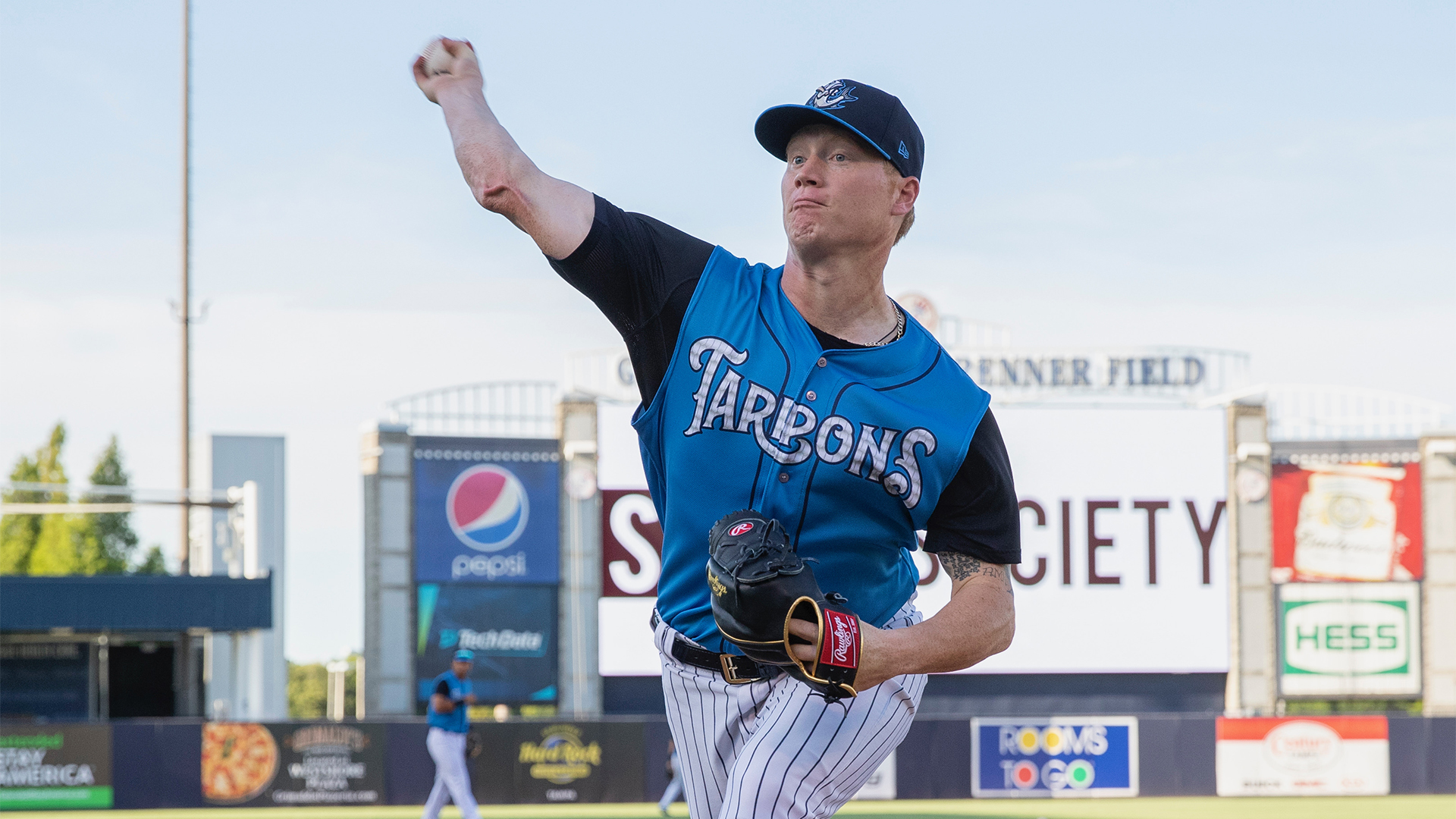 Nick Nelson was the story for the pitchers tonight. In his Yankees’ MLB Debut, Nelson went three scoreless innings, only walking two and striking out four. His first strikeout came on three pitches, collecting his first MLB strikeout on the first batter he faced. He would go on to get the win for the Yankees in his MLB Debut!

Aaron Boone stating, “I thought he was terrific,” in talking about Nelson’s debut tonight. He said he knew he was going to have to lean on some of the younger guys in the bullpen tonight and that a lot of them have been knocking on the door for a while now, Nelson included. “He was great tonight,” stated Boone, who said Nelson had high velocity on his fastball and that it was staying up in the zone tonight. He also stated that he had a great changeup tonight and that it is a great pitch for him. Boone said he got tired toward the end of the final inning, but that he made a couple of really good pitches to end the inning with his changeup.

Aaron Boone also stated that there will continue to be opportunities for Nelson to take advantage of and where it goes from there, Boone stated it has to play out.

Nick Nelson also spoke with the media following his MLB Debut. “It was awesome being out there, wearing pinstripes, and making my debut at Yankee Stadium,” said Nelson who said waiting for this day was nerve-wracking and that it was exciting to get out there. He stated that it was weird coming out without fans, but that it was a good way to ease in. But he stated he would’ve loved for the fans to be there for the rivalry with the Red Sox.

Nelson stated that his phone’s been off the hook since he came in from his outing. He stated his girlfriend, family and some buddies were watching the game and that he called them after. Nelson stating had fans been allowed in the stadium, his girlfriend, Abi; daughter, Henley; grandparents, Marie and Ronnie; and buddies would have been at the game. Nelson stating that growing up, his grandparents never missed a single game, regardless of the circumstances.

When asked what allowed him to jump through the Yankees’ farm system so quickly, Nelson stated that his pitching coaches from Tampa through Scranton really helped him out and helped him work on his off-speed pitches and working through different pitch counts.

Nelson will go home with his first strikeout ball and the belt after the win.

GIo Urshela spoke on Nelson’s outing, stating that he was very impressive in his debut, threw his fastball really hard, and that he was happy for him to get out there tonight.

Mike Tauchman also spoke on Nelson’s outing saying that the outing said a lot. Tauchman stating that Spring Training was the first time he saw Nelson throw and he thought he was extremely impressive. He said he made a statement-making his debut on a Saturday night against the Red Sox at Yankee Stadium. Tauchman stating that Nelson wasn’t scared and that he attacked hitters very well with his fastball, stating that Nelson and Kriske (Made his MLB debut last week) are both huge weapons in the bullpen.

David Hale came in to replace Nelson in the eighth inning. He pitched two innings, giving up just two hits and walk. He struck out three.

The Yankees would go on to win this one 5-2 in New York.

It was a big game for the Yankees full lineup tonight. Mike Tauchman stated that it’s great to hit in the Yankees lineup and that the position player depth in the team is a strength of the Yankees. Tauchman stating that you have to grab the opportunity when your number gets called and that it’s definitely easier with the momentum the Yankees’ lineup creates.

Tauchman also stating that the Yankees have a lot of guys who hit a lot of home runs. “When we’re at our best, we’re driving in runs, we’r running the bases well, and using the whole field,” stated Tauchman, who said that consistently putting pressure on an opposing team’s pitchers creates success.

Gio Urshelaalso stated that he’s extremely happy to be back with the Yankees this season, and trying to do better this year and keep his confidence when he’s playing. “That’s what I’m trying to do every day,” stated Urshela.

Boone also spoke on Gary Sanchez, who got his first hit of the season tonight against the Red Sox. Boone stated that Sanchez is progressing and that he just missed the ball to left field tonight, stating that in his last at-bat, he just got in on him, and had the walk. Boone stating that Sanchez is starting to roll a little bit and will hopefully bust out here soon.

The Yankees close out their series and go for a series-sweep of their AL-EAST Rival, Boston Red Sox tomorrow night at 7:00 PM. Coverage will be on ESPN.

Major League Baseball also announced the Yankees schedule for next week, it will be as follows: