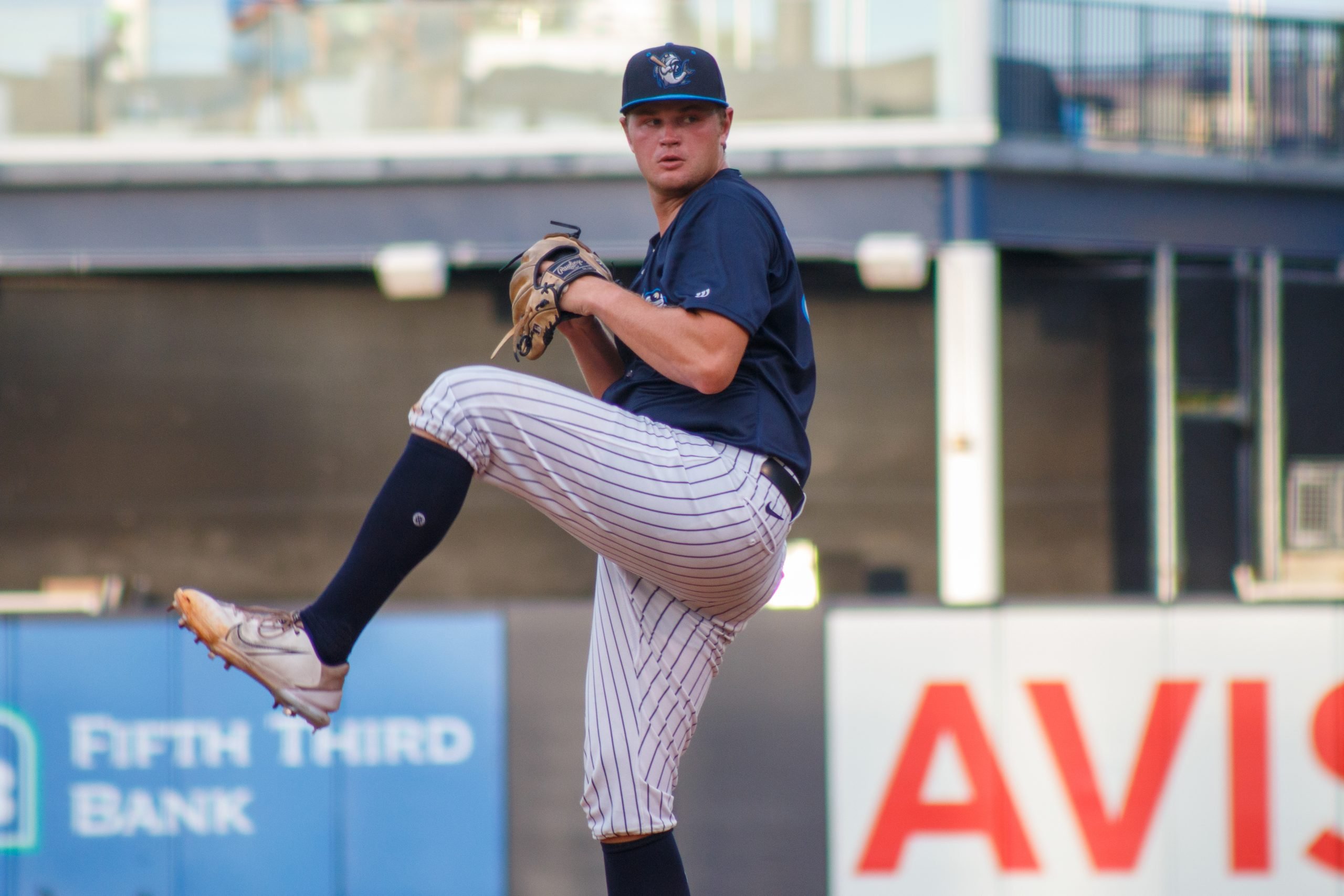 The 2022 trade deadline season officially began Wednesday night when the New York Yankees acquired outfielder Andrew Benintendi from the Kansas City Royals. With Benintendi being a free agent at the end of the season, the Yankees were not going to have to give up any of their top prospects to make a deal happen.

However, they did give up three pitching prospects in the deal that were all at the lower levels of the farm system in RHP Beck Way, RHP Chandler Champlain, and LHP T.J. Sikkema:

On the surface, this is not an overpay for the Yankees in any way. They needed to address the offense by adding a contact hitter that can bring a spark to the team and they did that. In addition, the Yankees were able to trade from a position of strength since the organization has done a solid job developing pitchers over the last few years.

Way was the Yankees’ 4th Round pick in 2020 and has spent the whole year with High-A Hudson Valley. In 15 starts, he was 5-5 with a 3.73 ERA and had 80 strikeouts to 26 walks over the course of 72.1 innings of work. While the right-hander has walked two or more batters in 6 straight starts, he was giving the Renegades length as he had gone at least 5 innings in eight straight starts (4 outings of 6+ innings).

When you watch Way’s arsenal, he has a fastball that can reach the mid-90’s in velocity to go with a strong breaking ball and a changeup that continues to improve. Out of the three pitchers dealt, he is the one the Royals fans should be excited about because of his potential.  With this trade, the Yankees only have one player left in the organization that was selected in the 2020 MLB Draft (Austin Wells in Round 1).

Back in 2019, I covered Sikkema at short-season Staten Island. At the time, the fastball was reaching 95 miles-per-hour, but he can also throw the changeup and curveball with different arm slots and angles and he told me then he isn’t afraid to use them in any count.

Before this trade, you could make the case Sikkema was ready for Double-A. In three July appearances, he had a 1.23 ERA and had 29 strikeouts to 2 walks (4 hit batters). in 14.2 innings. Being that he is 24, he could be a player that starts in Double-A with the Royals as well.

At the beginning of the year, the 2021 draft pick that the Yankees and their fans were most excited to see was Will Warren (8th Round pick). Champlain (9th Round pick) was having a strong season as a starter under-the-radar. In 15 starts, the 23-year-old right-hander went 2-4 with a 3.80 ERA and had 86 strikeouts to 15 walks in 68.2 innings of work.

From the perspective of helping the big league club, the Yankees saved a lot of their blue-chip prospects that they could use in more deals as we get closer to August 2 to help them add to the rotation or the bullpen.

At the minor league level, this does create some shakeup for rotation spots at Hudson Valley and Tampa. First, if you want to look at pitcher who could go from Low-A to High-A, keep an eye on Tyrone Yulie and Juan Carela.

Yulie, who turns 21 next week, has been dominant for the Tarpons in his last three starts. Over the last 15.1 innings, he has allowed only one run (0.59 ERA) and has 20 strikeouts to 1 walk.

As for Carela, he has been the most consistent pitcher on Tampa’s staff this year. Over 15 games (13 starts), the 20-year-old is 7-2 with a 2.89 ERA. He has 103 strikeouts to 32 walks in 74.2 innings pitched. He has not allowed more than three earned runs in any start this season and has had seven or more strikeouts in nine straight appearances.

If Yulie or Carela were to move up, one name to watch that could possibly move up is Sean Hermann. Hermann has made 6 starts in the Florida Complex League and is tied for second in the league in strikeouts with 41 (6 walks). The 19-year-old who was a 14th Round pick in last year’s draft has pitched into the fifth inning or later in each of his six starts and has 5 or more strikeouts in each one.