Yankees Made the Right Decision with Adams 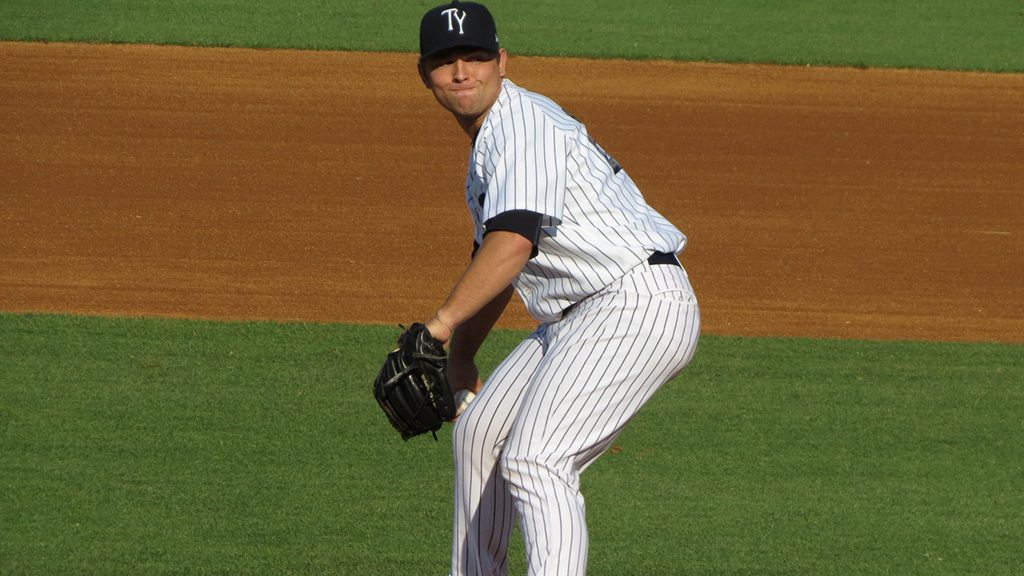 Chance Adams is flourishing as a starter with Trenton (Photo by Bryan Green).

When the Yankees selected Chance Adams out of Dallas Baptist University in the fifth round of the 2015 draft, they were getting, on the surface, an underrated collegiate reliever.

After Adams recorded a 3-1, 1.78 mark in 14 relief appearances at Staten Island, Charleston and Tampa last summer, the Yankees, given he had shown them a fastball, cutter, curve and circle-change, decided to make him a starter in 2016. The club has reworked the roles of several pitchers this season.

“What we are trying to do is put all our pitchers in the roles we feel they have their best chances of succeeding in the majors,” said Trenton manager Bobby Mitchell, who has piloted the Double-A Thunder to a 55-35 mark at the Eastern League All-Star Break. “We felt Chance would work well as a starter.”

Right-hander Adams, 21, who played at Chaparral High in Scottsdale, Ariz., and Yavapai College in Prescott, Ariz., before enrolling at Dallas Baptist, has made that decision look golden. In 17 starts between Tampa and Trenton,Adams is 9-0, 2.63, with a strikeout/walk ratio of 98-25 in 85.2 innings. He has allowed only 54 hits in emerging as a pitcher to follow in the system.

His best performance of the season came Saturday night in The Diamond in Richmond, Va., where he threw six hitless innings – 78 pitches and 58 strikes – in a 5-0 Trenton win in front of 7,567 fans.

“It’s not only me,” Adams, who signed for $330,000 in 2015, said Sunday, as the Thunder boarded the bus to return home from Central Virginia and the All-Star Break. “Last (Saturday) night, (shortstop) Tyler Wade and (third baseman) Miguel Andujar combined to make four great plays for me on soft grounders.

“And as far as my record, I got banged around a bit in a start or two when I first came to Trenton. The guys came back and scored for me.”

The difference for Adams is the Yankees took his cutter and turned it into an effective hard slider that he is throwing for strikes on both sides of the plate. mixed with his fastball, which is sitting at 93-95, curve and change.

“That has really helped me attack hitters and keep improving,” said Adams. “I am happy with my fastball, slider and curve. I am working to improve the change. I know what a key pitch it can be.”

Adams’ emergence has added to what has been one of the major reasons the Thunder are having an excellent season – a pitching staff which enters the All-Star Break leading the Eastern League in ERA (3.06), strikeouts (754) and shutouts (10). With Adams filling the rotation spot of lefty Dietrich Enns, who was promoted to Triple-A Scranton/Wilkes-Barre, the moves have been seamless for the Thunder.

“There are things I am learning here,” said the 6-foot-1, 215-pound Adams, who has made five starts for the Thunder. “I know I can’t make a mistake to any hitter here, especially in the three or four spots. I’m learning how to read swings. I need to keep attacking.”

“I really feel I will always have my stuff when I go out there. If you have it one day, I feel it should be there the next day. That’s just how I look at pitching..”

The Yankees felt they made sound decisions on pitching roles in Spring Training. Adams and Enns have flourished as starters and are two of the emerging stories in the organization for 2016. Jonathan Holder is doing the same as a closer in Trenton.

And the future certainly appears bright for Adams and all these arms.